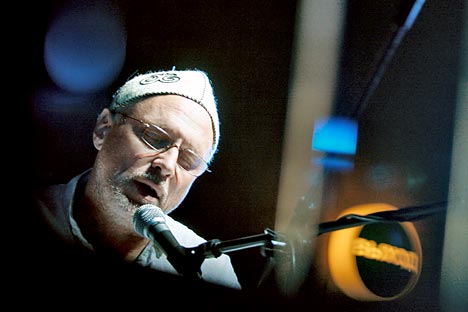 Sergei Starostin: "I was struck that without any education people can sing so convincingly that I did not have any questions." Source: Kommersant

Despite the fact that the language of folk music is available to all those who are interested in it, performers who really use it are rare. In Russia, one of these is Sergei Starostin.

As a child, Starostin sang with the Moscow Chapel choir, until a clarinet teacher noticed that his two front incisors were suitable for playing the clarinet. Since then, he has specialized in wind instruments.

Starostin met his wife while he was studying at the conservatory. She was a student of music theory and asked him to accompany her to performances by folk musicians "to carry the tape recorders." The assignment changed his life.

"In a village near Ryazan, we came to an elderly lady’s home. She made us sit, gave us some tea to drink and started singing,” Starostin said. “First of all, I'd never heard such a voice - a natural, ethnic, folk voice, and second, I was struck that without any education people can sing so convincingly that I did not have any questions."

"I pulled the Tver horn, which I play now, out of oblivion; kalyukas - overtone flute, gusli, along with a lot of other instruments appeared in the course. I gathered a few thousand songs in the ethnographic expeditions. I gradually began to accumulate the instruments."

Starostin has also uncovered forgotten aspects of Russian traditions in his work.  "In the old days, the Maslenitsa folk festival used to be called ‘krivosheyka’ [twisted neck]. Now, there are few who know about it. The name was given for a reason. During the Maslenitsa carnival, the people went from house to house, and never forgot to look at the other folks' windows, where the neighboring mother-in-law was treating her son-in-law as a guest. There was a stack of dishes on the windowsill, prepared for a course change. It is at the height of the stacks that they were looking and twisting their necks. To see, whose mother-in-law was better," Starostin said, giving one example.

Today, many famous musicians perform variations on ethnic music and Russian folk music is no exception. In the UK, singer Peter Gabriel has released CDs by Pokrovsky Ensemble, the St. Petersburg Terem-Quartet and master of Tuvan throat singing Ondara Kangaroola. Tuvan group Huun-Huur-Tu has been on a tour that Gabriel organized in the U.S., Japan and Europe, which resulted in a huge interest in this kind of ethnic Russian music.

In 2002, Starostin was nominated for the BBC’s World Music prize, which is awarded each year to a musician working in the ethnic music genre.

"I think we face a serious choice, when a whole generation, the younger generation, is cut off from their own culture,” Starostin said. ”But our initiative to revive the folk music supported by other musicians is growing gradually like a snowball. And I very much hope that this will help us all find our way to our own people."

At the moment, Starostin is working closely with ethnic musicians in Europe and Asia. In his projects, authentic material may merge with an electric bass or powerful drums, get funky sound or avant-garde rhythms. This "modernized" music coexists with pure folk melodies and stories.