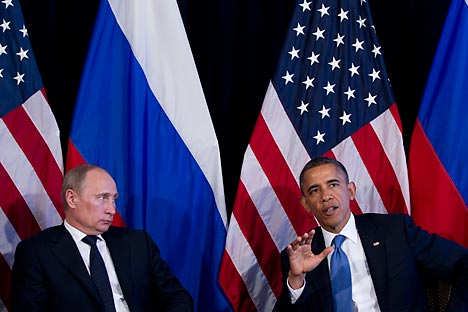 The G20 summit in Los Cabos, Mexico closed with the announcement that next year’s summit will be held in St. Petersburg. For Russian President Vladimir Putin, who ignored the G8 summit in May and never tires of stressing that the G20 is the main international forum for informal negotiations, the St Petersburg summit may be another step towards enhancing Russia’s role in the world economy, and not only through growth of the GDP. During his press conference in Los Cabos, Putin stressed that in preparing for the next summit, he would concentrate on the problems the G20 was set up to resolve in the first place: reforming the international monetary system, strengthening international financial institutions, and transforming financial market regulation.

The U.S. and Russia keep collaborating on economy and non-proliferation

“The conditions must be changed for the functioning of the international financial system,” said Putin, spelling out his views on the key problems of the world economy. He also spoke in highly critical terms about the problems of sovereign debt: “It is outrageous that the average sovereign debt in the eurozone has exceeded 80 percent of GDP and in the United States, 104 percent.” In Putin’s opinion, it is necessary to cut the budget deficits of the world’s leading countries. “While that parameter is still stable in the eurozone, in some countries, including the States, it is over 9 percent,” Putin said.

The Russian president expressed serious concern about the future of the euro and the U.S. dollar, because Russia’s main gold and currency reserves are in these currencies and in government bonds of developed countries. “We would like to know what will happen to the dollar after the presidential elections in the United States in November, when the U.S. will come to grips with the problems it faces and the challenges that confront it, as the national debt stands at $15 trillion,” said Putin. “What will happen to the main world reserve currency and what should we prepare ourselves for?”

The very fact that Putin said that the end of the world might come this year not because of the Mayan calendar but because of the colossal U.S. debt, shows that the Russian president is not going to look on as Russia’s financial reserves are used by a state with which his country has many differences. As the BRICS mini-summit held on the fringes of the G20 showed, this position is shared by the leaders of growing economies, above all China, although this is not always openly declared.

Meanwhile, the number of political differences is growing between the traditional world leaders and those states that were called “developing” in the last century. Syria is the most salient example. Moscow’s fundamental position is that the fate of Syrian President Bashar Assad must be decided not by the world’s strongest states but by the Syrians themselves.

As Putin told a press conference: “We think that no one has the right to decide for other people who should come to power and who should be removed from power. Yes, we know that part of Syria’s people, those represented by the armed opposition, want to see President Assad leave.

Firstly, they do not represent the entire Syrian people. Secondly, the most important thing is not simply changing the regime itself, but ensuring that if it does change – and this should be achieved through constitutional means only, the bloodshed will then stop and peace will return to the country.”

Judging from the joint statement following the bilateral meeting between Putin and U.S. President Barack Obama in Los Cabos, the two leaders support the plan of UN special representative Kofi Annan “including movement forward on political transition to a democratic, pluralistic political system that would be implemented by the Syrians themselves.” Not a word was said about Assad’s resignation.

Yet Obama’s statement at the final press conference placed the accent a bit differently: “it is impossible to conceive of an orderly political transition that leaves Assad in power,” the U.S. president said, adding that the U.S. would continue to insist that the Syrian president had lost his legitimacy and had to go.

The problem, however, is that Moscow’s position is fully shared by Beijing. In Los Cabos, Obama met with Chinese leader Hu Jintao, who also insists that the Syrian problem be resolved by non-violent political means..

“The situation in Syria is becoming more and more complicated and the confrontation between the Assad regime and the opposition continues. At the same time, there are differences between Russia and China on one side, and the U.S., on the other,” said Leonid Syukiyaynen, a prominent law scholar and professor at the Higher School of Economics. “Even so, there is a wish to bridge the gap and find a common solution to the problem. The negotiations will continue, though it is hard to say what the outcome will be. But we hope it will not involve use of military force and intervention in Syria.”