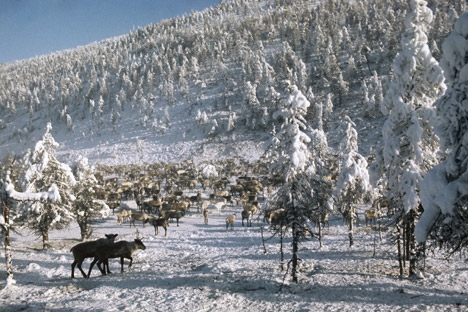 Russia's village of Oymyakon is one of the coldest places in the world. Source: RIA Novosti

Residents of the village of Oymyakon are used to the many contradictions that make up their lives.

Oymyakon is the coldest inhabited place on Earth. In the winter, the temperature at the “Pole of Cold” drops to -76 degrees Farenheit (-60 degrees Celsius). It is difficult to believe that people live in such conditions – much less thrive, and yet the residents of Oymyakov are known for their longevity.

This is only one of the contradictions about life in Oymyakon. In the village, the water in the Oymyakon river does not freeze. But this is not the result of magic. The ground here is permanently frozen to a depth of 5,000 feet; under the pressure from the frozen earth, the ground water escapes to the surface. In the language of the local people, the Tungus, "oymyakon" means “unfrozen river” or “the place where fish spend the winter." There is no wind her; the weather is always sunny, small shaggy horses roam the tundra. In winter, their thick coats grow to a length of four inches, and the mane covers not only the neck, but also the shoulders.

At a temperature of -75, a person's unprotected face can become frostbitten in a few seconds, even from a random wind. Mercury in the thermometer freezes and boiling water splashed into the air will form a snow cloud. Most cars do not start in this kind of weather and others, such as the Russian-made Ural and UAZ models can be heated only through using an open flame blowtorch.

All the souvenirs in the town are emblazoned with the number -71.2 – the temperature in Celsius recorded here in 1926 by Sergei Obruchev and is considered the lowest point to which the temperature could drop.

But in such seemingly inhuman conditions, the local population has managed to find a compromise with nature. Local residents enjoy clean air and water, an active lifestyle and healthy food. Their main diet is fish, horsemeat and dairy products. They compensate for the lack of fruit by collecting wild berries.

Andrei Danilov, who has lived all of his life as a reindeer breeder, is 102. Houses are no longer made of reindeer skins, so Danilov sleeps in a canvas tent in the frost. His father died at age 117, and his mother at age 108. Danilov’s friends, Aryan and Afrosinya, live in a yurt. Recently, at the age of 90, they adopted a baby girl – the couple never had their own children. Now Aryan and Afrosinya raise cattle. According to their account, they have never once in their lives been sick. The couple believe that the cause of their health lies in two local dairy products: hayak and kyorchekh. Hayak in its flavor and color is reminiscent of fatty oil. The recipe for kyorchekh is similar to ice cream: fresh cow's milk is whipped with berries, partially frozen and converted into cakes.

Related: Struggling with the snow

However, the most famous dish in Oymyakon is stroganina, a kind of Siberian sashimi. The process of preparing it begins already at the time of fishing. It is made only from sturgeon, Arctic cisco and broad whitefish that are caught under the ice. A Tungu fisherman kills the caught fish with only one skillfully placed blow and freezes it while constantly adjusting and straightening the fish; if it is allowed to freeze crooked, it will be difficult to shave. When the frozen fish is brought in from the outside, it immediately starts to be shaved – the name of the dish comes from the verm strogat', to shave. Shavings have to be removed from the fish in such a way that on each layer there is a thin discontinuous layer of subcutaneous fat; it is this layer which contains the Omega-3 acid, which strengthens the heart and slows down the aging process.

Not only can these dishes not be prepared in any of the southern cities, they cannot be imported either. They exist only as a part of northern life, along with the blinding sun, the centenarian reindeer breeders and the ponies that resemble bears.

The story is based on the infomation from Russia's Geographical Community.