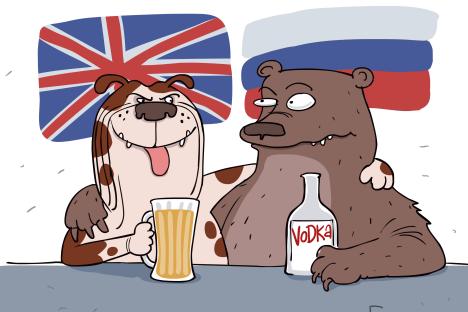 Although the Russian-British relations have been turbulent during Vladimir Putin's first presidential terms, the current geopolitical situation and Russia's new challenges drives him to come up with more flexible approaches of how to deal with UK.

Former Prime Minister Tony Blair was the first foreign leader to develop an informal relationship with the then newly elected Russian President Vladimir Putin. At the time, Blair was envied by other European politicians. In its time, the TNK-BP transaction was the biggest foreign investment in the Russian economy, with the blessing of both Putin and Blair. Yet it all ended in a complete fiasco, with the two countries’ relations deteriorating rapidly and reviving memories of the Cold War.

There is hardly any other European nation that could evoke such controversial feelings in Russia as Britain. On the one hand, we have a long tradition of political rivalry; but on the other, we also share a tradition of intellectual attraction.

There are many reasons for this, including the bitter geopolitical rivalry between the two great powers in the second half of the 19th century and the beginning of the 20th. Then again there is the fundamental standoff between the two different types of empire – the world’s largest continental empire, spreading across much of Eurasia, and the biggest naval power, whose ships ploughed the seas all over the globe.

According to geopolitics experts, each of these models affects the political psychology. Finally, the two countries have always had very different economic ideologies: while faith in freedom of the markets and trade established itself early in Britain, Russia has traditionally relied on the state sector and dirigisme.

Yet the two nations have always been keenly interested in each other, whatever the political barriers. After the end of the Cold War, the barriers seemed to collapse, with hundreds of thousands of Russians visiting Britain or moving there permanently. Even so, it is different with inter-governmental relations, which reached their nadir 15 years after the collapse of the USSR with the Litvinenko case. They have improved since then but still remain frosty – in stark contrast to Russia’s booming relations with Germany, France, Italy and a number of other European countries, regardless of who is leading them. The departure of the Labour government two years ago made it possible to pretend that the page had been turned. At least there is no personal enmity between Russia’s top politicians and members of David Cameron’s Coalition of Conservatives and Liberal Democrats.

Little can be done about the historical and cultural background; it will always be what it is. Yet it is possible to establish a more businesslike atmosphere – not because of bilateral ties but thanks to the overall European policy, which is changing before our very eyes.

Years ago, it seemed that the federalization of Europe – a process Britain always treated with suspicion – was inevitable. On the wave of the political achievements of the late 20th century, the European Union tried to emerge as an integrated global player, big and influential. Russia, with its reliance on old bilateral ties, felt embarrassed in this situation.

Yet the pan-European process suddenly reversed in the middle of the past decade: the expansion impeded effective decision-making and the pan-European Constitution was blocked by the sovereign nations’ unwillingness to renounce their freedom, while reluctance to send troops to war strained relations with the United States, provoking further internal tension. The worsening of the immigration problem in a number of countries triggered a new wave of xenophobia, running counter to all “European values”.

Finally, falling behind in the global economic competition provokes a desire to fence Europe off from the rest of the world – not the best economic recipe nowadays. As a result, the Lisbon Treaty, which was called upon to strengthen the European

Union’s political position, only served to weaken it. And the euro crisis quickly turned into a conceptual crisis of European integration, raising doubts about the entire project.

Having realized that they could not achieve their political gains through pan-European institutions, the countries with ambitions began to seek independent ways. Hence their desire to establish direct links with Russia – something Moscow has always wanted. And Britain may also join this trend, especially given that one priority announced by the current government from the start was to build closer ties with the emerging BRICS nations. Meanwhile, Vladimir Putin hopes that changes in the EU will provide new opportunities for establishing special relations with individual European countries.

Russia is changing, too. Following the Georgian war, the Kremlin and the White House came to the conclusion that the potential of the policy of confrontation needed to restore Russia’s international status has, in fact, been exhausted. What could be achieved by flexing muscles pumped up by doping with oil and gas has been achieved. Now, a more flexible and constructive approach is needed to attract partners. And the doping dosage has dropped, too. Indeed, a marked improvement in Russia’s relations with Poland and Norway, lifting tensions with Ukraine, boosting ties with Sweden, along with Russia’s efforts to bolster ties with traditional partners are all aimed at creating a better environment for Russia.

Moscow’s conceptual standoff with London is a symbol of the tough foreign policy that characterized Vladimir Putin’s second presidential term. But his third term will be different. He realizes that Russia is fully dependent on the global situation, in both economic and political terms. Moreover, this dependence is increasing, while the country’s ability to affect the external environment is declining. All Moscow can do now is react. The most feasible approach is caution and moderation but giving vent to his character, Putin tries to compensate for his cautiousness with seeming resolve. Yet even his rhetoric fails to reach the impressive levels of the late 2000s. It lacks passion. Instead, there is a desire to reduce the potential for conflict wherever possible. Russia will not go as far as making big concessions to achieve this but it might show more flexibility. This will give Russian-British relations a new chance, despite the long standoff. Even if these relations themselves lack the impetus for improvement, the external situation will work for it.