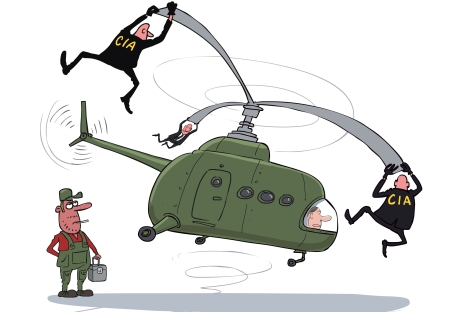 To say Russia and Europe approach events in Syria differently is disingenuous and ignores key facts.

Russia has never said that it supported all the actions taken against the rebels by Damascus. Nor has it ever said it was providing the Assad regime with weapons that it might use against the opposition. But Russia has always admitted that it is providing the Syrians with arms under contracts that had been signed and paid for a long time ago. But only defensive weapons. Finally, the fact that Moscow has never made a settlement in Syria conditional on removal of its incumbent president does not mean Russia sees Bashir al-Assad as the only acceptable leader.

Opinion: The Russian position on Syria - myths and reality

More often than not, when Russia’s role in the Syrian conflict is reported, it is accused of doing something it has never done. Why is this? It could be put down to the old Cold War stereotypes when the West came out for democracy and Moscow allegedly opposed it. But it also has something to do with geopolitical interests: Mitt Romney, Republican presidential candidate in the US, recently said Moscow was America’s No 1 geopolitical foe. Many in Europe also still see Russia’s policy through the NATO gunfight.

Russian officials have repeatedly denied they are supplying the Syrian army with weapons for fighting the rebels. The US recently admitted US Secretary of State Hillary Clinton’s claim that Russia had shipped new helicopter gunships to Damascus was wrong: the helicopters were refurbished ones owned by Syria. The ship carrying them headed back to Russia after its London insurer withdrew cover. Clinton made these statements to ratchet up pressure on Moscow. But Mrs. Clinton may have been serving the interests of American arms manufacturers, who compete with Russian firms. For who would agree to buy arms from Russia if it can, under outside pressure, renounce its previous obligations to supply military hardware that has paid for. This is what our Western rivals are trying to induce Russia to do.

Russia is not violating any international resolutions. Discussions on the embargo imposed by some Western countries on supplying arms to the Assad regime were not held with Russia and it did not sign any agreement. And the embargo prohibits supplying weapons to the regime but not to opposition. Syrian television shows seized trucks with weapons destined for the rebels daily.

Neither Saudi Arabia nor Qatar try to hide the fact that they are supplying weapons to Assad’s opponents. But do Saudi Arabia or Qatar produce their own weapons? No. So Assad’s enemies are fighting the Syrian army with Western-made weapons. Yet, even in this situation, Russia, contrary to popular misconceptions, takes a guarded stand and is not in a hurry to render large-scale assistance to official Damascus either directly or through third countries. Moscow is well aware that such assistance would not stop the bloodshed and would merely exacerbate tension in the region.

“What difference does it make to the dead, the orphans and the homeless, whether the mad destruction is wrought under the name of totalitarianism or the holy name of liberty or democracy?” Gandhi once said.

The situation in North Africa – Egypt, Tunisia and Libya – where political instability persists in the wake of the Arab Spring, makes Russia apprehensive about the consequences of a violent change of regime in Syria. Echoes of the Syrian showdown can already be heard in Lebanon, where armed clashes have taken place between different religious groups, the Shia and Alawites on one side, and the Sunnis, on the other. Experts have warned that the Syrian conflict, now often referred to as a civil war, is also to a large extent inspired by religion. The toppling of Assad would lead to a massive confrontation on religious grounds. Moscow would like to avoid such a scenario. I think the West would, too.

The fact that Russia and the West have the shared goal of settling the Syrian situation peacefully, without outside interference, opens up opportunities for dialogue, free of cloying political clichés. Moscow and Brussels see eye-to-eye on most points of the settlement issue, so there is no reason to quarrel. But Russia believes that an agreement on Syria’s future is impossible unless Shia Iran takes part in the talks. Many Western experts acknowledge Tehran’s role in the Syrian conflict and its influence on Damascus.

In the context of the economic crisis, the two erstwhile partners, Moscow and the European Union, stand to gain nothing from quarrelling over events in Syria. Given their common goal, they still have a chance of acting in concert and looking for ways out of the Syrian conflict together.

One should bear in mind that the discussion on Syria between Russia and the West would decide not only the political fate of Assad but also the shape of Russian-European relations at least for the six years of the Putin presidency. If the Syrian conflict provokes growing “cold confrontation” between Moscow and Brussels, it would amount to a gross miscalculation on the part of the European politicians, who will have failed to find a common language with Russia in spite of the many positive prerequisites for it.