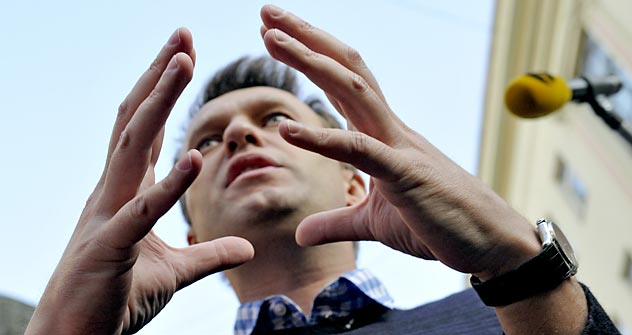 Membership of the Aeroflot Board of Directors is the highest job Alexei Navalny has ever held in a state-controlled company. Source: Kommersant

Anti-corruption blogger Alexei Navalny has become a member of the board of directors of the state-controlled company Aeroflot. His candidacy was backed by minority shareholders.

Blogger Alexei Navalny was elected to the board of directors of Russia’s largest state-controlled airline, Aeroflot, at yesterday's annual shareholders meeting. His candidacy was proposed by Alexander Lebedev’s National Reserve Bank, which controls about 15 percent of Aeroflot. Andrei Rozhkov of the Moscow-based investment and financial company Metropol estimates that Mr Navalny won 787 million votes, approximately 6 percent of the total number of shareholders.

Entrepreneur Alexander Lebedev nominated Navalny, arguing that corporate procedures need to be more effective, particularly those with multi-billion turnovers like Aeroflot. In an interview with the Slon internet portal, Lebedev stressed that he was not unhappy with Aeroflot’s current procedures, describing Navalny as someone who is “very effective even as minority shareholder [and will] have even more opportunities as a board member.” Lebedev discussed possible membership of the Aeroflot Board of Directors with Navalny back in December 2011. He felt “it would benefit all the shareholders, including those who represent the government.”

Member of the Aeroflot Board is the highest position Navalny has ever held in a state-controlled company. He even wrote “Fly Aeroflot” in his Twitter blog. Navalny also noted that the international advisors ISS and UK-based Glass Lewis, who give voting recommendations to minority shareholders, described him as an independent director and also supported his candidacy. Navalny also wrote that, as a member of the board of directors, he intended to do “what I usually do, that is, defend the rights of minority shareholders and the interests of the company.” Navalny will be paid in the same manner as the other board members if the next Annual Meeting so decides. After researching the company, he reported last year that the members of the board of directors were paid a total of 18 million rubles ($544 million). 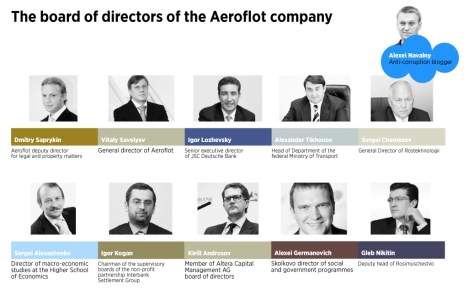 The board of directors of the Aeroflot company. Click to enlarge. Source: Anton Panin

First published in Russian daily "Kommersant". You can read the full version in Russian here: http://kommersant.ru/doc/1966851