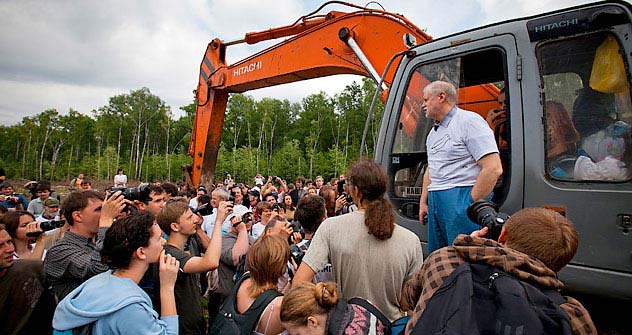 The recent Anti-Seliger meeting grew out of the political activism of people like Alexei Navalny and Evgenia Chirikova.

Five years ago Evgenia Chirikova, a resident of the Moscow Region town of Khimki had no fan base outside her own friends and family. She was a typical 30-something Russian woman, focused on her children and her career. Ambitious by nature, she earned three college degrees and ran a small business with her engineer husband. She had no interest in politics: “I didn’t think it was possible to change anything, so politics seemed a senseless endeavor.”

Chirikova, 34, has a clear voice and could pass for a student in her jeans and t-shirt. She doesn’t look like a person who commands the attention of a broad spectrum of opposition parties and movements and is known for her criticism of Prime Minister Vladimir Putin and the ruling United Russia party. Her metamorphosis from suburban working mother to one of Russia’s best-known activists occurred after the Moscow city government decided to bulldoze the forest next to her house to build a highway to St. Petersburg.

Chirikova became interested in the forest’s fate after the birth of her second daughter: “Suddenly I had time to look around, and I realized that while I was working and paying taxes, somebody else was using that money to destroy my habitat.” Chirikova gathered local residents together and spoke out in favor of rerouting the highway. Ecologists later came up with 11 alternative routes. Bureaucrats reacted to this initiative with bewilderment, while many local residents were suspicious: In Russia, an international multi-billion-dollar project had never been stopped by a forest before. “The Khimki administration didn’t understand what we wanted: ‘If you want to live in the woods,’ they said, ‘go to Siberia,’” Chirikova said.

Evgenia Chirikova found a new identity for herself – and millions like her – by giving voice to a local grievance. Source: ITAR-TASS

Chirikova didn’t realize what she was getting into. “I was so naïve at first. I thought this highway must be some mistake. I also thought that I lived a law-based state.” During the conflict over the Khimki Forest, 10 activists were maimed by unknown assailants. Chirikova, too, received anonymous threats. But she refused to give up. Some thought this young mother must be crazy; others thought that she was an aspiring politician trying to make a name for herself; still others believed that she had a commercial interest in the deal. “It’s the bureaucrats who turned me into an opposition leader,” said Chirikova. “I became a citizen very late, at 30.” She and her husband own two companies specializing in the electromagnetic protection of equipment. Mikhail manages both companies while Evgenia does public relations, and she is used to the threats on her life. If she’s afraid, she doesn’t show it.

“Every time [someone else was beaten up], I said to myself: one more time and I’ll run away. But you can’t spend your life running away. If we’re afraid, then we’ve lost,” Chirikova said.

Her many exchanges with bureaucrats who told her that the highway was a federal project and therefore not subject to change did nothing to increase her confidence in the powers that be. “I grew up fast,” said Chirikova. At first she put her hopes in Prime Minster Vladimir Putin, who as president had shifted the construction of a new oil pipeline further from Lake Baikal. But in 2009, Putin approved the construction of the highway.

That same year Chirikova, with the opposition’s support, ran for mayor of Khimki on a single platform – the rerouting of the highway. She came in third. But the wide range of beliefs among Chirikova’s supporters shows that there is a demand in Russian society for specific problems to be solved, said Alexei Mukhin, head of the Center for Political Information. “That’s why traditional opposition movements afraid to switch from slogans to actions are losing popularity,” said Mukhin.

The fight for the Khimki Forest ended in a decision to narrow the highway from 600 meters (2,000 feet) to 100 meters (330 feet) and prohibit commercial construction either side of the highway. And today, Chirikova mainly blames the destruction of the forest not on Russian bureaucrats with “their sleepy views of ecology,” but on the French construction company Vinci, the foreign partner in this project. It was Vinci, claiming European ecological standards, that insisted on the routing the highway through the forest and threatened huge forfeits if the concessionary agreement were broken; according to the business daily Vedomosti, the fine for breaking this deal could reach some 4 billion rubles ($143 million).

Navalny: “It was senseless to get involved”

One of the people who doubted Chirikova’s chances for success was lawyer Alexei Navalny, an activist and blogger who has made his name fighting corruption in state companies. Several years ago he was a member of the liberal party Yabloko and worked on a committee to protect Muscovites. “People came to me complaining about the construction of a highway in Khimki,” he said. “My answer then was that it was senseless to get involved. You wouldn't put together an initiative group and anyway all be beaten up.” Chirikova was one of the people who came to Navalny. “Now I see how wrong I was,” said Navalny. Today Navalny is an active supporter of the Khimki movement and is helping members make sense of the competitions to build the highway, in which, according to Elena Panfilova, head of the Russian branch of Transparency International, “corruption is a large component.”

Like Chirikova, Navalny became famous thanks to actions rather than words, defending the rights of minority shareholders in large Russian state companies. He and Chirikova are the same age, neither is affiliated with any political party, and both prefer to work independently as activists, attracting supporters from across the political spectrum. They are a new kind of opposition in Russia, oriented toward solving real problems, said Nikolai Petrov of the Moscow Carnegie Center. “If with Evgenia it’s the transformation of a civil position from a private protest, then Alexei targets political activity at the outset,” Petrov said.

Chirikova “didn’t plan to go into politics, she was pushed into it by the local authorities,” said Mukhin, adding that both Navalny and Chirikova “have the image of a popular leader responding to public despair.”

Because he has no access to television, Navalny considers the Internet the best purveyor of his ideas because it is fast and cheap. He has a large following online and in the past has raised contributions totaling some 7 million rubles ($250,000) in a month to support his anticorruption work. His current project is to lower the level of support for party of power United Russia in December’s parliamentary elections. To this end, he has rolled out a campaign calling on people to vote for anyone at all except United Russia, as he believes it is a hub for Russia’s most corrupt politicians. Petrov thinks Navalny has a chance of winning wide support since he has a “promising and well-considered position.”

Chirikova and Navalny are ready to share their experience. In June, they participated in a four-day workshop in the Khimki Forest that attracted more than 3,000 people of different and divergent political. The workshop became known as Anti-Seliger, in reference to the annual meeting of pro-Kremlin youth group Nashi at Lake Seliger in the Tver Region. The Khimki workshop succeeded, said opposition politician and participant Boris Nemtsov, because it drew people of different views and from different walks of life. The goal of Anti-Seliger, said Chirikova, was to create a dialogue between different political and civil forces and to “give Russian citizens real knowledge about how to defend their honor, dignity and rights in this country.” The organizers intend the workshop to be an annual event.