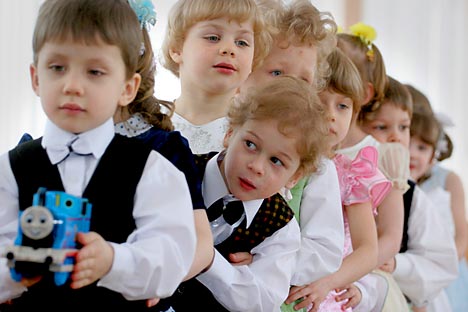 With encouragement from local authorities and charities, more and more Russians are interested in adopting or becoming foster parents.

In early June, Russian President Vladimir Putin signed a decree on the National Child Welfare Strategy. Its main idea is simple: every child has the right to live and grow up in a family, and the state must ensure that right. Therefore, a decision was made to minimize the number of orphanages by transferring 90 percent of orphans to families in various forms of guardianship.

The document indicated another important task: a gradual reduction in the number of children made available for international adoption. Russian orphans should to be adopted by the Russian citizens. This is the first official announcement of the kind coming from such a high level.

Russia is currently experiencing a demographic crisis; at the same time, the number of couples wishing to become foster parents is growing within the country.

Today in Moscow, there are 32 schools to train foster parents. The schools were created by the Moscow government, but they came about largely through the example of the first school at the Family Charity Fund, which was established in 2000. The experts from this school developed the programs for the municipal schools. Twelve professionals teach at the Foster Parent School of the Family Fund, including doctors, psychologists and lawyers. Seven of them have also adopted children. One of their main objectives is to dispel popular myths about adoption, for example, the myth that all children in orphanages are sick.

In recent years, the government has significantly increased funding for orphanages. The expenditure per child ranges from 350,000 – 600,000 rubles ($11,000 - $18,000) - depending on the region. This money is not spent so much on the children, however, as on school maintenance, staff salaries and utility costs. In addition, orphanage staff members receive substantial bonuses for working with sick children, which leads staff members to add diagnoses in some cases. At the Foster Parent School, teachers encourage parents to look at the child first – before reading anything about any diseases they might have.

The process of adding diagnoses is also encouraged by the laws regarding foreign adoption. Russian legislation says that a child cannot be approved for international adoption until he or she has been rejected by five potential local foster families. Orphanages make more money from foreign adoptions, whereas Russian families can adopt for free, so orphanage staff are encouraged to give a child as many diagnoses as possible to scare off potential foster parents from Russia.

Anton Zharov, an attorney who also teaches at the Foster Parent School, relates a typical story: A family wanted to adopt a three-month old baby living in an orphanage, but three families had refused the baby because of his terrible diagnoses, which included such diseases as hepatitis. The couple went ahead and adopted the baby anyway, only to discover that the child never had hepatitis, nor any other disease. The orphanage then confessed that they were preparing the baby for foreign adoption.

"I am confident that the foreign adoption is causing serious harm to the Russian domestic adoptions. Therefore, in my opinion, foreigners can be given only the children with real disabilities that we are unable to help anyway," said Family Charity Fund Director Mikhail Pimenov,.

According to data published at the U.S. Government Department of Foreign Adoptions' website, in 2011, Americans adopted 970 Russian children. Only China (2,589) and Ethiopia (1,727) have a higher number of children adopted by American families. All in all, foreigners have adopted more than 3,000 Russian orphans.

Today, however, more and more Russian regions are working to encourage families to keep their children at home and preparing foster families. For example in the Krasnodar Territory, there were 25 foster families in 2005. Today, there are over 2,000. The territory has changed its approach to the problem of orphans. There are programs on TV regarding adoption; local authorities began searching for people who could become foster parents. They started taking them to local orphanages, showing the children to them and telling how smart and talented they are. As a result, 9 out of 10 orphans in Krasnodar today are living in families. The state encourages this process financially, too: the adoption of a child with a disability is supported with up to 500,000 rubles. The foster parents themselves also receive a monthly payment.

In the industrial city of Cherepovets, until 2006, there were nine orphanages for 300,000 children. The local authorities then realized that the problem's solution starts with the family and the charity fund Doroga k Domu (The Way Home) appeared in the city and opened a Foster Parent School. Soon, the number of orphanages was reduced to five. Most importantly, no foster families have returned children placed with them.

In the Tyumen Region, local social services are designed to help families in crisis. Parents in need are given help finding a job and giving up drugs and alcohol, if needed. They are granted financial assistance to start small businesses. As a result, the number of parents deprived of parental rights has been sharply reduced. And 89 percent of the children live in families.