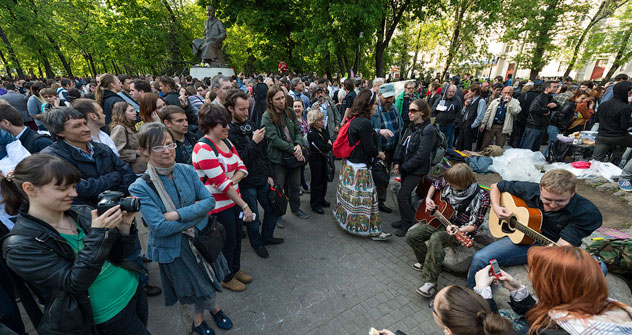 Political vacationers from all over Russia in pursuit of protests and a view of history head for a different kind of hotspot.

Turbulent times have spawned a new type of tourism with young vacationers following anti-government demonstrations. As protests move from city to city, any corner of the country may become a popular destination for the new “political tourist.”

Tatyana, (who preferred to give only her first name), works as a kindergarten teacher in her native Ulyanovsk. Her friend Aleksey, a Muscovite she met in Astrakhan, encouraged her to come to Moscow and see for herself what was happening. "He helped me to travel here," Tatyana points to Aleksey. "I especially planned my vacation to Moscow so that it would coincide with the "March of Millions" in order to show that there are concerned people outside the capital," Tatyana said.

Aleksey is all smiles, "The main thing is not getting one girl involved, but demonstrating to the entire world the principle of one for all and all for one."

On the eve of the protest, Aleksey showed his like-minded friend from Ulyanovsk the sites that have become testaments to the protests, for example, Chistye Prudy. Tatyana wanted to see what would happen on the square in front of the State Duma building, where just before a rally opposition members of parliament staged a demonstration.

Young people learn about other youth from the regions. Political vacationers from the Stavropol Region, in order to make their presence known in the "March of Millions," brought their regional flag to the event.

Moscow has been seeing political tourists since the spring, and the first surge occurred in May. According to the Moscow police, of the 30 opposition camp participants who were arrested on May 16 near the Barrikadnaya Metro Station, "practically half were not Muscovites."

A new wave of regional activists and political tourists joined the June 12 "March of Millions." More than 10,000 people confirmed their participation in the protest on the event's V kontakte (Russia’s Facebook) page a week before the event. Nearly half of them were from other regions.

"Regional activists have brought their resource to the capital: large-scale involvement," said Alexey Makarkin, vice-president of the Center for Political Technologies.

But these days, the capital city’s opposition, which is frequently accused of being disconnected from the rest of Russia, is interested in getting its word out to the regions.

Twenty-one-year-old Alexander Blinov from Tver looks younger than his age, but he considers himself to be an experienced political tourist. The young man made his first political trip in December of last year, having arrived in Moscow to participate in an event on Bolotnaya Square.

"Earlier I could not imagine that someone would travel somewhere out of a sense of solidarity and a desire to make a difference," Blinov said, "but I convinced myself that there are people who care. There are already so many of us, we are interested in spending time together, walking around the city, and there is the freedom that we stand for."

Nika Kakobyan, 25, and Stepa Perelyak, 22, became friends on the Internet. The girls live in the same city, but they met for the first time when they traveled together to Astrakhan to join the supporters of Oleg Shein, a mayoral candidate who had gone on a hunger strike. They bought tickets together, and they traveled there together from their native Stavropol. When checking into the hotel, they both described the goal of their trip as "political tourism."

"We very quickly decided then that we would go, not particularly thinking about where we would stay and other details; we just bought tickets and went," relates Kakobyan. "I simply had the intuition that we should be there. And then we realized that we could not just join in with the protest and not try to find out how the city lives."

"I never thought that I would pay a visit to Astrakhan," said her traveling companion, Perelyak. "We had the time and opportunity, so I thought I would go to the rally and at the same time see the city. “

"But this is serious history, without the emptiness of common tourism," insisted Kakobyan.

As political tourism flourishes, a specialized "tourist agency" has been established. Two photographers from Samara, Nikolay Khizhnyak and Albina Raskolnikova, organized the Rosdesant association, which collects donations for trips to "hot spots," two of which are Moscow and Astrakhan. According to reports published on the association's social network page, they were able to collect over 380,000 rubles over the course of a month, and they have been able to send about 200 people to both cities. The collected funds have helped people create the best itineraries; subsidized the purchase of railway or bus tickets and gas.

"At first we realized that there were a lot of people who wanted to participate in the project only for the sake of getting a free trip," Raskolnikova said, "We had to start up our own 'security service.'" She rejects applications from minors, checks the accuracy of information supplied in the electronic application form, and looks through people's profiles on social networks.

For some, political tourism seems amusing, to others it is absurd, and for others still it is dangerous. Alexey Mukhin, director of the Center for Political Information in Moscow, expressed his concerns in stark terms: "In political science these are termed the technologies of the 'velvet revolutions.' It is possible to speak of a revolutionary virus. The provinces, despite their hatred of Moscow, copy it. Initially, it was about testing models of opposition behavior in the capital. Then the opposition leaders staged political tours, in particular to Astrakhan, and the opposition virus infected the provincial elite.”

The activists touring the country see things differently, and are becoming more creative about getting around the vast country. Some political tourists have managed to secure a free trip without the help of agencies. For example, the Muscovite Artem Aivazov collected money for a political trip to Astrakhan via his personal e-wallet.

"I don't have that much money, I only have about 6,000-7,000 rubles (about $200 to $220) on hand," said the activist, "This isn't enough for round-trip airfare. Then I made an appeal on Twitter, asking whether anyone could help me financially, and a few people replied whom I personally did not know. As a result, the amount of money that I had on hand doubled."

Many political tourists try to invite themselves over for a night with one of the locals. Groups are created on social networks under the moniker: "I am seeking a room during the political demonstration.” The "hosts" and "guests" discuss with gusto the terms of the stay –  the proximity of the "room" to the center of events, the number of beds, bad habits ... In addition to general amenities the hosts often offer their visitors a tour of the city –  this is now an important advantage in the struggle for securing an interesting guest from the other end of the country.

Political tourists offer each other helpful advice on community pages: how to behave in a government office if you are arrested, and how to hitchhike – still a popular and viable way to get around in Russia for many young people, who think the advantages outweigh the dangers.

"It's natural that younger people are always more mobile," agrees Levada Center Sociologist Denis Volkov, "and the level of their prosperity makes no difference;  the ability to engage in independent economical behavior is important for them. That is why people who are political tourists are often freelancers, that is, they are not at much risk of losing their jobs."

This is an abridged version of the article. A full version can be found at http://kommersant.ru/doc/1956711