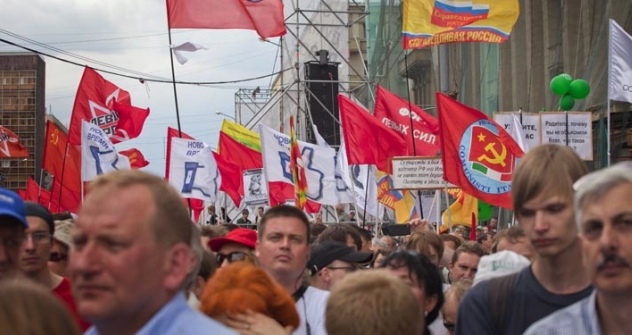 The large-scale rally was the second major protest action since the inauguration of Vladimir Putin.

Once again on June 12, Russia Day, opposition protestors took to the streets of Moscow. The March of Millions began in the middle of the day with a march through Strastnoi Boulevard in central Moscow followed by a mass gathering on Academic Sakharov Avenue. Between 15,000 and 18,000 people participated in the rally, according to police estimates, but Left Front leader Sergei Udaltsov claimed 100,000 people attended the meeting and opposition activist Ilya Ponomarev gave the number as 200,000.

During the rally, activists adopted the Free Russia manifesto, which calls for President Vladimir Putin's resignation, a new bill on parliamentary elections, the re-election of Russia's State Duma and a constitutional amendment that decreases the presidential term from six years to four.

The day before the rally, Russia's Investigation Committee attempted to search in the apartments of opposition leaders, their parents and other political activists. Prominent anti-corruption blogger Alexei Navalny, opposition leader Ilya Yashin and popular TV presenter Ksenia Sobchak were interrogated by the Investigation Committee on June 12, ostensibly as part of an investigation into the May 6 public unrest in downtown Moscow.  Udaltsov was called to appear before the committee, but attended the rally instead. The Left Front leader argued that as an organizer of the event, he was responsible for the security at the meeting and had to attend.

Russia's opposition has called the searches and interrogation reminiscent of the Stalinist terror of 1937, and the Twitter hashtag #привет37год (#hi37), which refers to the 1937 events, is trending very high on the Russian Internet.

However, more experienced opposition leaders believe that these measures are nothing new. They note that searches, interrogations and arrests happened before the 2007 Dissenters' March when some opposition leaders – including Nikita Belykh who later became governor of the Kirov Region – were taken into custody. At that time, the methods proved efficient in decreasing the number of rally participants.

Today, however, the situation is different. The raids have given the opposition leaders more publicity; Russia's state-owned TV channels broadcast programs on the apartment searches. Additionally, discussions on the recently approved law against illegal protests has been covered extensively in the mass media and online. The law, which came into force on June 9, increases the penalties for violating the rules of organizing public meetings. The authorities say that the law is intended to guarantee freedom of speech while protecting society from “radicalism.”

The new law on political rallies dramatically raises fines for participating in rallies. Now the maximum fine for ordinary participants is 300,000 rubles ($9,000) and organizers can be fined 1 million rubles (about $30,000). Previously, the largest fine for such violations was less than 1,000 rubles ($33).  The law also mandates community service for violators and forbids wearing masks, drinking alcohol and carry weapons or objects that could be used as weapons during rallies. Additionally, the document introduces penalties for the organization of unauthorized public meetings such as “mass walks.” According to the law,  such activities “violate public order, sanitary rules, rules of conduct in public places, functioning of life support and connection facilities, damages plantations” and create hindrances for transport and pedestrians.

Many Russian politicians have endorsed the lawsuit, claiming that these new measures are intended for the protection of ordinary citizens. For example, Vladimir Pligin, chairman of the State Duma committee for constitutional legislation said the “law about rallies emerged to regulate the large number of legal situations that can occur during the rallies and try to avoid legal violations during rallies and marches that also carry criminal charges.”

Nevertheless, some members of the president's council for civil society and human rights argue that the amendments contradict the Russian Constitution. The Communist Party promised to appeal the law to the Constitutional Court.

Alexander Ageev, first deputy chairman of the State Duma committee for constitutional legislation and the leader of the Moscow branch of the Just Russia party, claimed that the deputies have already found at least 11 paragraphs in the law that could be applied to marriage ceremonies or actions by sports fans. The authorities will have to use the laws selectively, said Ageev in an interview with Russian daily Vedomosti.

Russian social networks, which are dominated by opposition supporters, reacted negatively to the law. «I think that this document violates our rights for gatherings and public will which is granted to us by the Constitution,»  wrote user rusergeev on YouTube, summarizing the most popular points of view.

A United Russia party member who is close to the president administration told Vedomosti that the goal of the law is to divide the moderate opposition from the radicals and discourage these moderates from participating in further protest actions.

This text was combined from reports by Vedomosti and Lenta.ru