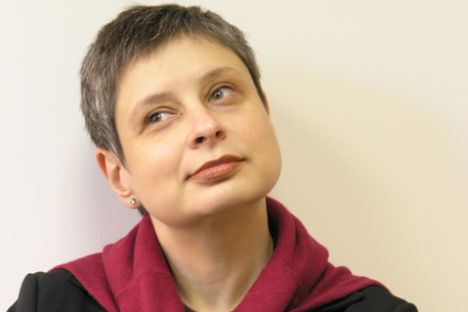 Nina Krushcheva, is the great granddaughter of Soviet leader Nikita Khrushchev, talked to RBTH about the Russian identity and how the protests led to a new chapter in her book.

Nina Khrushcheva is the great granddaughter of Soviet leader Nikita Khrushchev. She is also a New Yorker, and an associate professor of international affairs at The New School and a senior fellow of the World Policy Institute. Khrushcheva graduated from Moscow State University before immigrating to the United States; she received her doctoral degree in comparative literature from Princeton University.

Opinion: An ode to Occupy Abai

RBTH spoke to Khrushcheva about her forthcoming book “Russia’s Gulag of the Mind.”

Russia Beyond the Headlines: How would you describe your new book?

Nina Khrushcheva: It’s a family story. I was trying to connect that story to the story of Russia. It explores a troubled family in a troubled country and how to overcome those troubles and problems by being honest with its past and history, because that’s the only way to move forward.

RBTH: Would you say that your family managed to overcome it, then?

NK: I’ve been trying to be honest about Russia for 20 years, all time I’ve been writing. The main point of “the Gulag” concept is that ultimately Russians never need barbwire to keep them in check. They are very good volunteers to be suppressed for the idea of a great nation rather than individual struggle, because the idea of a powerful country is more important for them.

RBTH: In your last book “Imagining Nabokov: Russia Between Art and Politics,” you write about how Russians like to suffer. They prefer a heroic death to trivial day-to-day life. Do you have any idea why our national character is like this?

NK: I think, in some way it’s geography that shapes the nation. If you are East and West at the same time, who are you really? Christian orthodoxy has a lot to do with it, too…. And the national idea is a bit problematic, because Russia is a country that defines itself through negative values. If we look at what Russia is, Russia is un-western. It’s a civilization that defines itself through what it is not…. this is clearly a problem, because it’s very difficult to move forward when you are defining yourself though a negative value. When you say – I am what they are not, it means you don’t know what you are.

That infects all our revolutions and even the latest protests – once again, we know what we don’t want, but what do we want then? I think these three issues are the core of the [mental] Gulag, in a sense, because they are very specific to Russia. I really would like Russian culture to define itself through pizza, wine, something, not through its soul and not through the West.

RBTH: Given that you’ve been writing this book for a few years and finished it recently, did you have to add an additional chapter due to recent events in Russia?

NK: When the protests started, I was in Russia, participating. I wrote a conclusion to the introduction, which I eventually converted to a short final chapter, called “The Tectonic Shift.” I welcome what’s going on, and at the same time there is not that much of a liberal message there. Its not like Jeffersonian democracy is being called for.

I find it interesting that the main [figure] of the protest is Alexey Navalny. One of his messages is “Russia for Russians” so he seems a Putin double in some ways. Hopefully this will be a tectonic shift, but there is a possibility it won’t. May be we just got disillusioned with one tsar and will get ourselves another. It’s always about replacing one strong man with another. That’s what I find interesting.  That’s clearly one of the Gulag’s patterns. It doesn’t matter that we are no longer in prison. We are stuck in that un-West orthodoxy belief in something that doesn’t exist.

RBTH: It seems to me, that the recent events in Russia appear to begin to repeat the events of the 1960s, and the 1990s. It’s a bit like a vicious circle…

NK: I like to compare Russia to Shawshank from that movie, “Shawshank Redemption.” Inside, you are a big man. You know where you stand, you know what your story is. The minute you get out all these different rules scare you. So instead of figuring that out and figuring your place in it you want to go back, where you know what things are. The minute you get out into free world, the challenge of freedom is probably the greatest of all.

RBTH: You wrote in “Nabokov” that the Russian state develops but society doesn’t. But writing about the protests in Russia, most journalists acknowledged that it’s the other way around - society is changing and now people demand more freedoms and rights, but the state is unresponsive, which creates the conflict.

NK: That book was published in 2008. I would not say now that society doesn’t develop. So that’s exactly my tectonic shift. Society does develop. The only thing is, that the society was so wonderfully developed in 1991, and then poof! It was gone.

One of the problems Russia has, and I hope it will change, is that the nation that remembers that it needs freedoms every twenty years doesn’t deserve those freedoms. In America you have freedoms every day, and the minute something is challenged, you go and fight it.

Many say, that these are the largest protests since 1991 – well, that is the problem. Because where were we between 1991 and now?