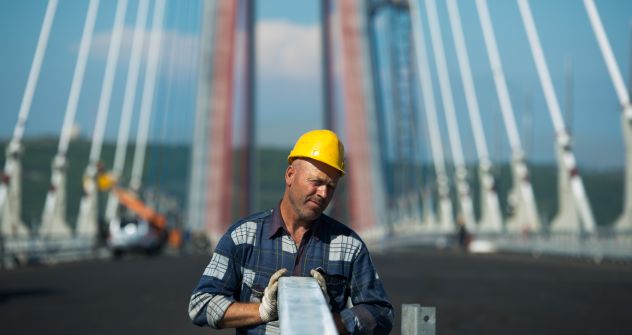 Hopes are high that the APEC summit will help transform Vladivostok, sometimes considered the last European city in Asia, into a gateway to the heart of Russia. Source: AFP / East News

Vladivostok is almost ready for the Asia-Pacific Economic Cooperation (APEC) summit, with many facilities completed by early June.

Russia has spent almost five times the original budget to prepare the city of Vladivostok for the Asia-Pacific Economic Cooperation (APEC) summit to be held in the city in September. The country has injected an estimated 679 billion rubles ($21 billion) into Vladivostok; partially to increase the number of facilities that will be left in the city after the summit. Auditors report that nearly all the construction had been completed by early June.

Summit attendees will take a new road into town. The new 26-mile highway is an alternative to the M-60 Ussuri Road, and it has acquired the unflattering nickname “scandal road.” Heavy rains in June compromised a supporting wall near Tikhaya Bay, causing the road surface to crack. The Investigating Committee of the Primorsky Territory has opened a criminal case in the incident.

However, the scandal ended just as abruptly as it started – the investigators calculated damages at 2 million rubles ($61,000) and the regional governor fired the director of the regional Highways Board, Andrei Razgonov, for failing to monitor the construction; additional inspections of all facilities built for the summit were also ordered.

Vladivostok’s airport has also undergone major upgrades in preparation for the summit. The old Knevichi airport terminal was built in the 1970s and the narrow taxi strip connecting the runway to the terminal is suitable only for commercial jets and smaller planes. Bigger aircraft have to park a mile away from the building. Now, the airport has a new terminal with a capable of handling more than 3.5 million passengers per year.

Another major infrastructure improvement was the construction of a cable-stayed bridge connecting the mainland part of Vladivostok with Russky Island, where the summit will take place. The 1.5 mile-long-bridge is a monumental structure with pylons standing 1,000 feet height. All of the structures were installed using the GPRS and GLONASS systems.

View the infographic: The map of Primorsky Territory

After the summit, the Far Eastern Federal University (FEFU) will take over the 10 million square feet of property on Russky Island prepared for the meeting. Professors will move into the apartments constructed to accommodate heads of state during the conference while students will find new homes in the hotels constructed for lower-ranking officials. The buildings are just 300 feet from the sea.

Primorsky Territory Governor Vladimir Miklushevsky hopes that the improvements will encourage locals to stay at home; migration has reduced the population of the city by a quarter since the 1990s to about 2 million people.

The authorities hope that the summit will encourage businesses and tourists alike to take a new look at Vladivostok. A gaming zone to be constructed on Ussuriysk Bay near the town of Artem and Russky Island is also becoming a special economic zone.

Hopes are high that the APEC summit will help transform Vladivostok, sometimes considered the last European city in Asia, into a gateway to the heart of Russia.