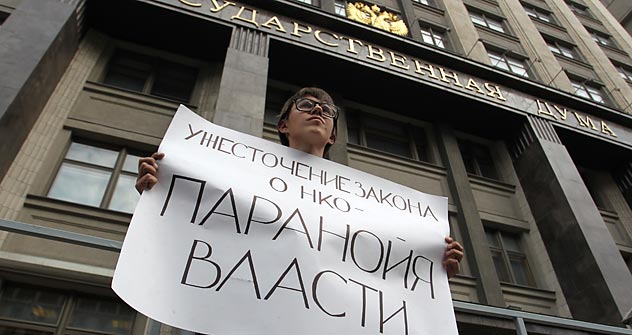 An opposition activist protesting against the NGO bill in front of Russia's State Duma. The slogan reads "The restrictions of the NGO bill is the authorities' paranoia." Source: RIA Novosti / Evgeny Biyatov

The Russian State Duma has adopted a bill requiring non-governmental organizations (NGO) involved in politics and funded from abroad to register as “foreign agents.” Russian and foreign experts are divided in their assessments as to what extent the law will affect society.

The Russian State Duma has passed a bill that requires all non-governmental organizations engaged in politics that receive funding from abroad to register with the Justice Ministry as “foreign agents.” The bill passed the State Duma easily; 374 deputies supported the bill, three opposed and one abstained.

According to the bill, a non-governmental organization is categorized as foreign agent if it receives financial funding from other countries or their public agencies, international and foreign organizations, non-citizens or their representatives.

All NGOs will have to submit financial records and semi-annual reports on their activities to Russia’s authorities. In addition, the bill permits NGOs to be inspected based on individual complaints or publications about extremism in their activities.

Currently, there are more than 230,000 NGOs in Russia, about 30 percent of which are non-operating. Although the Justice Ministry already monitors their activity, there has been no monitoring of their funding.

The first version of the bill imposed sanctions for failure to comply with the law’s requirements. However, during the second and third readings, Duma deputies removed these provisions and decided to include them in a separate bill that is expected to be discussed this fall. Additionally, the date when the law will come into force has been postponed: it will become the law in 120 days after its publication in Rossiyskaya Gazeta rather than the usual 90.

The final version of the bill preserved the provisions imposing criminal liability and big fine for failure to comply with the requirements of the law. If an NGO is maliciously avoiding its responsbility to submit documents required to be added to the register, its representatives will face a fine of up to 300,000 rubles (about $9,000) or even imprisonment.

The bill fueled serious debate over its consequences. It was met with strong criticism from many Russian NGOs and Russia’s opposition groups.

The adoption of the bill will negatively impact the development of civil society in Russia, said Sergei Mitrokhin, the leader of liberal party Yabloko in an interview with Interfax. "It is a repressive step intended not simply to subdue the activities of NGOs, but to humiliate people who work in these organizations," he said. "The state will never fund the work of organizations that combat corruption, campaign for human rights and protest against the destruction of the environment. Domestic business will not do so either because it fears reprisals on the part of the state. All this made foreign funds, which were quite transparent, the only source of financing. This law will practically stop these activities today," Mitrokhin said.

Alexei Mukhin, head of the Center for Political Technologies think tank disagreed with Mitrokhin. “This is a very timely measure,” Mukhin said. “The situation around NGOs is not favorable for both our government and our society as a whole. There have been appearing new NGOs that are more active, more aggressive than older ones. They are more effective at imposing certain ideas on Russian population. This activity couldn't have been ignored by our government. Therefore, the reaction that followed is adequate. If these NGOs want to be so active in Russia, they have to have transparent accounting. Any government has a right to protect its interest and the interest of its country.”

Some foreign experts seem to be hesitant about negative consequences of the bill.

“I think much of the reporting on, and opposition reaction to the proposed law is overblown,” said Gordon Hahn, an expert at the Center for Strategic and International Studies (CSIS) in Washington, D.C.  “The mere adoption of a Russian law requiring NGOs to register with the Justice Ministry as a ‘foreign agent’ before it receives foreign funding seems to be perfectly in line with American practice.”

According to the U.S. government’s Foreign Agents Registration Unit (FARU), the amended Foreign Agents Registration Act (FARA) of 1938 “is a disclosure statute that requires persons acting as agents of foreign principals in a political or quasi-political capacity to make periodic public disclosure of their relationship with the foreign principal, as well as activities, receipts and disbursements in support of those activities. Disclosure of the required information facilitates evaluation by the government and the American people of the statements and activities of such persons in light of their function as foreign agents.” The term (foreign agent) also includes foreign political parties, a person or organization outside the United States, except U.S. citizens, and any entity organized under the laws of a foreign country or having its principal place of business in a foreign country.

“Moreover, Russia’s draft law does not diverge very much at all from Western practice in regards to the penalties it establishes for violations of the law,” he said.

Hahn argues that the problem lies with the connotation of the word ‘foreign agent’ in the Russian historical context: During the Soviet and perhaps pre-Soviet period the term was used to describe spies.

According to Hahn, the law seems designed to discourage but not prevent Russian NGOs from receiving foreign financial support.  “It should be noted that many pro-regime NGOs in Russia also receive foreign funding, but they may be able to get around some of the reporting requirements through bribes or more lax enforcement given their ties to those controlling the investigative organs. The danger of the law comes with the Justice Ministry’s ability to establish the specific reporting requirements, which are not specified in the law, either in terms of the information that needs to be filed, the forms to filed, and the method of certifying those forms,” Hahn said.

Gregory Feifer, a former correspondent for Radio Liberty and an expert in U.S.-Russia relations, sees the bill as a “part of a wider crackdown against Kremlin critics following Vladimir Putin's re-election in May.”

“It adds to measures regulating NGOs passed in 2005 that were already deemed draconian,” he said. “The current bill is meant to ensure Putin's political dominance by giving law enforcers even wider arbitrary powers to silence opponents. It's the latest in a long series of moves to strengthen an administration that uses ever-more authoritarian measures to insulate itself from popular discontent, something that ultimately makes it less stable in the long term.”

Political analyst Valery Khomyakov echoed Feifer’s view. “This bill is very harmful because it will keep changing according to political goals,” he said. “Human rights activists will suffer the most. On the other hand, new funding schemes and financing structures will appear for sure. Besides, I am surprised the ruling party commentators only mention American organizations that finance our NGOs. Why do they ignore, for example, German organizations who do the same thing? I have no idea why they are doing this.”

Lev Ponomarev, leader of the opposition movement For Human Rights, finds the implication that he could be a foreign agent insulting. “I won’t register as a foreign agent, Ponomarev said. “I can’t be a "foreign agent." It humiliates me. It (the bill) is created for humiliation, to be the brand of shame. I won’t stand humiliation. Therefore, when the bill comes into force, I will keep getting foreign grants. I probably will be suggested to register as "foreign agent" but I won’t register. I want to see what they will write to me, how they will explain that I have to be considered a ‘foreign agent.’ It would be very interesting to read their reasoning. I deal with human rights and try to influence public opinion but it would be totally absurd to call my activity political. I am ready to file lawsuits if this is exactly what will happen.”