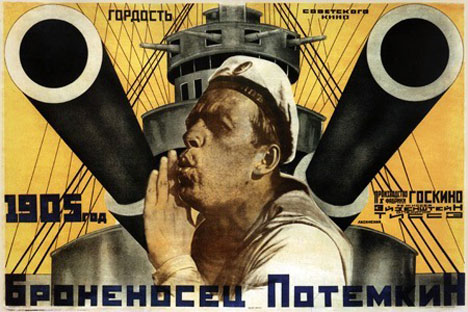 New project by RussoTurismo and Mosfilm gives Russian film fans access to a wide range of movies – with subtitles.

Russian film fans now have free online access to a huge archive of excellent Russian films from the days of the great film pioneer Sergei Eisenstein to the present era of popular directors such as Alexei Balabanov and Karen Shakhnazarov, complete with English subtitles.

Thanks to Mosfilm Studios and RussoTurismo, any viewer can now check out a wide range of Russian films, including Eisenstein's greatest films: "The Battleship Potemkin," "October," "Alexander Nevsky," and "Ivan the Terrible," as well as his first major silent film, "Strike."

The most celebrated films of Andrei Tarkovsky are also readily available. They include his wartime drama "Ivan's Childhood," "Andrei Rublev," about the life and times of the gifted Russian medieval icon painter, as well as his sci-fi classic "Solaris," "Mirror," which the New York Times called "a somber futuristic fantasy," "Nostalgia" and Tarkovsky’s final film, "Sacrifice," which has been compared to the work of Swedish master Ingmar Bergman.

Many of the films uploaded are based on great Russian literary works. At least three of Alexander Pushkin's works have served as a basis for films now available on YouTube: "Ruslan and Lyudmila," "The Tale of Tsar Saltan," and "Boris Godunov," the first two directed by Alexander Ptushko and the third by Sergei Bondarchuk.

Nikolai Gogol's "Viy," "Taras Bulba" and Ivan Goncharov's 1859 novel, "Oblomov," have also been made into films, as have at least three of Feodor Dostoevsky's masterpieces: "Crime and Punishment," "The Idiot" (in 10 parts), and "The Brothers Karamazov"(in 8 parts).

From Leo Tolstoy's works, Mosfilm has adapted "Anna Karenina" and "The Cossacks," although its "War and Peace," directed by Sergei Bondarchuk, contains no subtitles.

Naturally, many of the great Russian films take World War II as their subject matter. Mosfilm offers such movies as "The Fall of Berlin," made under Stalin and glorifying him. The perspective on the war from Soviet authorities during the Brezhnev era can be seen in Mosfilm's "Liberation" series.

Mosfilm movies that deal with the war on a less grandiose but more personal scale include "The Cranes Are Flying"(1957) and "Ballad of a Soldier"(1959). The following directors from the mid 1920s to the 1970s are all well represented: Grigori Alexandrov, Eldar Ryazanov, Alexander Ptushko, Leonid Gaidai, Larisa Shepitko and (her husband) Elem Klimov.

Films from the last 20 years of the 20th century are also featured, including "Moscow Doesn't Believe in Tears," which received an Academy Award as best foreign film in 1981.

Two of the most important films of the perestroika era, "My Friend Ivan Lapshin" and the Georgian film "Repentance," both of which were stylistically innovative and dealt with Stalinism in their own unique and critical ways, are on YouTube. Pavel Lungin's "Taxi Blues," for which he was recognized in 1990 at the Cannes Film Festival as best director, is on RussoTurismo.

Walter G. Moss is a professor emeritus of history at Eastern Michigan University. The complete version of this story can be found at hollywoodprogressive.com/russian-films-on-youtube.