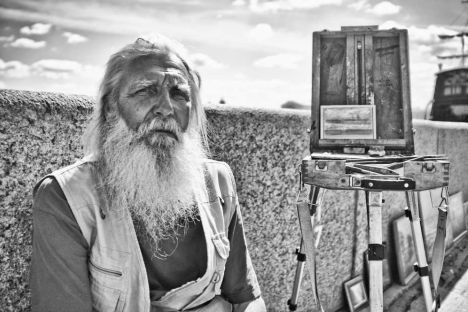 A photo presented at the exhibition “One Hundred Years: The Russian Portrait” which brings together portraits of Russian people. Source: Keen Heick-Abildhauge

As a way of showing the real Russia to his friends, a Danish photographer came up with the idea of creating an exhibition of portraits showing Russians aged 1 to 100.

What is perhaps most striking about the portraits from “One Hundred Years: The Russian Portrait,” is the friendliness and warmth the subjects, who range in age from one to 100, exude. Most of the Russians are smiling in these photos - in a completely natural way. The Danish photographer, Keen Heick-Abildhauge, chronicled real people, many in their everyday settings.

View the photogallery: One hundred years - the Russian Portrait

Yet somehow Heick-Abildhauge found them, or helped them become, totally at ease, even joyful at times, in a way that Russians are rarely depicted. From the fruit seller to the hotel maid, from the 100-year-old babushka to the fireman, he found people who appear unusually at peace with themselves. Assistant editor and St. Petersburg native Elena Bobrova caught up with the photographer and art director behind the project, which had its first exhibition in St. Petersburg.

Russia Beyond The Headlines: How did the project “The Russian Portrait” get started?

Keen Heick-Abildhauge: I first came to Russia three years ago because my wife got a job offer in Moscow, so we moved to Moscow and lived there for eight months. Later we came to St. Petersburg. All the stereotypes, all the things I knew about Russia, turned out not to be true. My stereotypes were breaking down, but a lot of my friends still were asking: “Why Russia? Isn’t  it so bad and cold?” And I didn’t experience it that way. Because the stereotypes of Russia are huge, everybody knows them. But most people have never been here. I found a way to show what I see here, when I walk down the street, and when I sit in the café.

RBTH: How did you come up with the idea of “One hundred years of Russian people”?

K.H-A.: I wanted to show some of the faces of Russia. Probably my background as an art director in an advertising agency had an impact. And then I came up with this idea, of course it was a challenge for me to find all 100 people [from the ages one to 100], but it was a very good way to put everything in one box, because I’ve been making photos and collecting stories all the time I’ve been in Russia.

RBTH: Is this your first exhibition?

Best of Russia on display

K.H-A.: This is my first exhibition and it became much bigger then I thought. In the beginning I just wanted to show Russia to my friends. Then the Russian media became interested, it took on a [momentum] which I couldn’t have expected.

RBTH: How many people participated in the project? And how did you make decisions about who should be in the exhibition?

K.H-A.: Of course, there was more then 100, there were about 240. Many sleepless nights! I had a big whiteboard in my office, where I had all pictures on the wall, and I was looking on the board and changing photos, because for a certain age I had five different people…. I wanted certain professions, for example a policeman, I didn’t get one. But I have a fireman, a doctor, a ballet dancer, a veteran, a priest. I wanted to show a bigger view of society.

RBTH: How did you find all your subjects?

K.H-A.: I had two assistants, they both speak Danish and helped with translation, finding people through friends of friends. Every time I met a new person, I asked a name and age, which wasn’t so polite. Once person told me, I’m 37, so my reaction was “Ohh, pity, but do you have parents, grandparents or children?” I was really aggressive for a long time, so many of my friends were involved in the project. Later I started to get calls, and people would ask: “Are you still looking for one at 79?” And if I was missing such a person, I was extremely happy for the help.

RBTH: How did you find your oldest subjects?

K.H-A.: Of course they are not the kind of people who are walking around the city. I found them in different veteran’s homes, but my 100- hundred -year-old lives on her own! I found her through my subject who was 45.

RBTH: Why are your subjects smiling in the photos? Russia has a reputation o being a nation that doesn’t smile.

K.H-A.: It was my idea that people should smile. One of the first things I said to my wife when we arrived in Moscow (it was my third time here) was, “My goal in Russia is to get Russians to smile.” She laughed and wished me good luck. I found out quite fast that Russian people are smiling; you just need to talk to them. It turned out to be easier than I thought.

RBTH: Where else would you like to show your exhibition?

K.H-A.: In Moscow and of course in Denmark, because that was the original plan to show Russia to my friends. Helsinki would be nice.

RBTH: How do you see the future of the project?

K.H-A.: I hope to make such project in more countries, so finally I’ll have 10. Denmark definitely, it’s small, I speak the language and have a good network there. But I also dream about big countries like United States, Thailand, Australia, Germany, last one especially it has huge history and strong stereotypes.