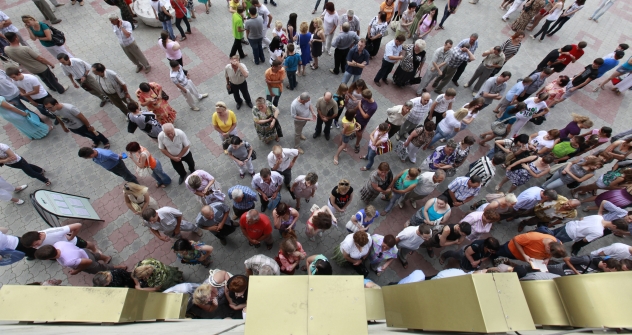 A survey by recruiting company Superjob found that Russia's labor market remains dominated by the cities of central Russia. First and foremost among these are Moscow and St. Petersburg and the regions around them, followed by cities such as Yekaterinburg, Novosibirsk, Nizhny Novgorod, Voronezh and Kazan. Superjob also found that there is a continuing trend for the population to leave the Far East and Siberia for central Russia.

The study also notes that labor trends in particular industries may differ substantially from the overall trend. In industry and construction, for example, 31 percent of job seekers are prepared to consider work offers in another region, whereas only 12 percent of administrative employees would make such a move. The explanation is simple: there is a need for bookkeepers and secretaries in every region, while industrial facilities and construction sites are concentrated in certain areas.

A more striking feature of the study is that the number of cities that attract workers from other regions also varies by industry. For example, Surgut and Tyumen are attractor cities in construction. In 2011, the Tyumen Region was second after Moscow in the amount of construction work being done. Furthermore, Surgut topped the World Bank and IFC Doing Business ranking for Russia, with respect to the ease of obtaining a construction permit.

In the IT industry, the attractor cities are Moscow and St. Petersburg, as well as Yekaterinburg, Izhevsk, Novosibirsk, and Tyumen. Five of these regions also rank in the top 10 for investment in information and communications equipment. These same regions are also among the top 10 for the percentage of organizations using ERP systems. In sales, the top 10 attractor cities in this field are Barnaul, Vologda, Yekaterinburg, Kemerovo, Krasnodar, Kursk, Moscow, Novokuznetsk, Sochi and Surgut. Most of these cities also rank among the top 10 with the highest retail and wholesale trade turnover.

Despite the fact that the ability of cities besides Moscow and St. Petersburg to attract skilled workers is an undoubted plus, Yelena Chernoletskaya, deputy director of Superjob's analysis department believes that this migration to specific locations in the country reflects the economy’s lopsided development. First of all, Chernoletskaya said, under the current economic system only cities that are tied in one way or another to one major company are really developing. In the case of Kaluga, the Novolipetsk Metallurgical Combine is an important employer. Surgut and Tyumen are linked with the operations of Surgutneftegaz. If the leading company in one of these regions encounters economic difficulties, the rest of the city's economy also suffers.

Secondly, an influx of migrants is a social burden for the receiving region and should the economy soften, the drop in living standards in such places will be deeper than in regions experiencing a more moderate influx of labor resources. This problem means that industry is not really fully developed in Russia, Chernoletskaya said. She added that skilled employees are limited in their job choices and economic centers are unevenly distributed; therefore influxes of investment and ties between different parts of the country are disrupted, slowing national economic growth as a whole.

Alexander Tolstykh, a member of the Presidium Bureau of the Association of Young Russian Entrepreneurs, has a different take on the situation. Tolstykh thinks that cities that attract workers from other regions have a good impact on the national economy as a whole, and that there should be absolutely no doubt about this. Kaluga, for example, is a good example of dynamic growth of a region in the non-raw-materials sector, and its growth rate has not flagged at all.

In Surgut and Tyumen, the practice of working on rotation was established during the Soviet period and was quite popular. “It would be a good thing for everybody, if more and more cities in Russia provided incentives for workforce mobility. The demand for workers and industrial production managers indicates growth in industry and infrastructure projects. On the whole, that is a direct reflection of the fact that our market is developing. Based on my experience, I can say that often there’s simply physically not enough local personnel, so labor migration is the best alternative,” Tolstykh said.

Dmitri Lipatov, a partner at the Nalogovik law firm, sums up the situation: there indeed are two sides to work force mobility in Russia. According to research done at the Higher School of International Business under the Academy of the National Economy, the level of turnover (hirings plus firings) was over 45 percent of the official population. That is considerably higher than in Soviet era, when employment turnover was 14 percent, and noticeably more than in Eastern or Western Europe. For example, the employment turnover rate in Poland during the “shock therapy” period was 42 percent; it was 32 percent in Bulgaria and 22 percent in Hungary.

On the whole, Tolstykh notes, work force migration in Russia is very low. Contributing factors are the Russian mentality, climate, and the country’s large territory and its inadequately developed transportation system. In the United States, for example, people change jobs 10 times or more in their lives, spending an average of 3.6 years at a given job. In an advanced and integrated economy, it is more cost-effective to bring a certain number of workers to the location where they are needed, than to build a business in a place that has a labor surplus, but lacks the needed natural resources. The cost to investors of relocating people will be an order of magnitude less than the transportation and communications costs of setting up a business in an inconvenient location. In order to encourage mobility, Russian business should  about the salary terms and transportation accessibility of the jobs they provide.