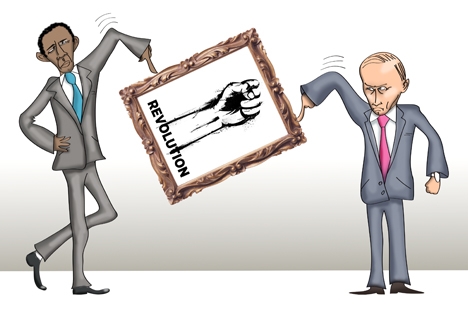 The long-lasting stalemate at the UN over Syria highlights the fundamental differences on the world order between Russia and China on one side and the West on the other.

For the third time in the last nine months, Russia and China have vetoed a Western-backed UN Security Council resolution on Syria that envisages external intervention as the main means for stopping violence in the country.

The long-lasting stalemate at the UN over Syria has implications beyond the settlement of the Syrian crisis, highlighting the fundamental differences between Russia and China on one hand and the U.S. and its allies on the other regarding principles for maintaining world order.

Russia and China disagreed once more with the West over Syria

During a telephone conversation between Russian President Vladimir Putin and U.S. President Barack Obama on the eve of the vote, Obama tried to personally persuade his Russian counterpart to support the West. Commenting on the 50-minute telephone conversation between the two heads of state, Putin aide Yuri Ushakov said: “Both Putin and Obama now better understand the nuances of the two sides’ positions, but differences remain over practical ways of solving the [Syrian] problem.”

The differences are fundamental rather than technical.

In the past, the U.S. has invariably backed any revolutionary movement proclaiming the goal of building a democratic society. These included the velvet revolutions in Eastern Europe, the color revolutions in the post-Soviet space and most recently the Arab Spring. This is in keeping with the underlying principles of the U.S. and with the consensus among the American public, which until recently needed some explanation regarding why Washington was collaborating with far-from-democratic authoritarian regimes in the interests of security. One example is Egypt, which was effectively ruled by a military junta led by Hosni Mubarak.

The doctrine of “humanitarian intervention,” in which non-democratic regimes boasting a strong protest movement are coerced into democracy was a logical extension of the support of “color” revolutions. And since a color revolution, as demonstrated by the fate of Muammar Qaddafi, does not preclude lynching, or a trial with a likely life prison sentence, as in the case of Mubarak, the amenability of the regimes targeted by the Arab spring is close to zero. This prompts a desire to solve problems through economic and diplomatic sanctions, and if that does not work, by military methods.

The doctrine of “humanitarian intervention” is obviously not very popular outside the United States and other mature democracies. The states in which democratic principles are weak or absent -  the majority of the world’s states - immediately think of what the doctrine promises for them, and they do not like it. As a result, the West has to secure the approval of the world community through the mechanisms of the United Nations, above all the Security Council, where agreement among just five members is enough for a resolution to be passed.

At present this scenario is highlighted by the situation with Syria.

Russia and China, as permanent veto-wielding Security Council members, effectively agreed to such a development in Libya. However, now they do not want to see in Syria a repeat of the Libyan events, in which NATO power was deployed against a country with a population of 6.5 million.

Veteran Russian diplomat Yevgeny Primakov writes in his memoirs that “the group of wise men” created at the UN to assess the new challenges to international security came to a unanimous conclusion that such negative processes as mass killings of civilians should be countered through UN mechanisms. Primakov stresses: “One must separate the chaff from the wheat. It is one thing to consider the situation within a country in terms of its threat to peace and security. It is an entirely different thing to attempt to impose certain models of state and social structure on other countries.”

In other words, Moscow, Beijing and other BRICS countries are upholding the principle of non-interference in the affairs of sovereign states that has been pivotal to international relations in the last 300 years.

It looks somewhat paradoxical, but Russia, the successor to the Soviet Union, is opposing the methods the Kremlin used in the 1950s and 1960s when it sent troops into Hungary and Czechoslovakia to shore up its ideological doctrine.

Kofi Annan, the UN special envoy to Syria, has expressed disappointment with the failure of the permanent UN Security Council members to achieve a compromise in order to stop the slaughter in Syria. Meanwhile, every victim of the 18-month-long civil confrontation diminishes the legitimacy and moral credibility of the conflicting parties. The situation calls for concerted action from the Security Council. They have no option except to come to some sort of agreement.