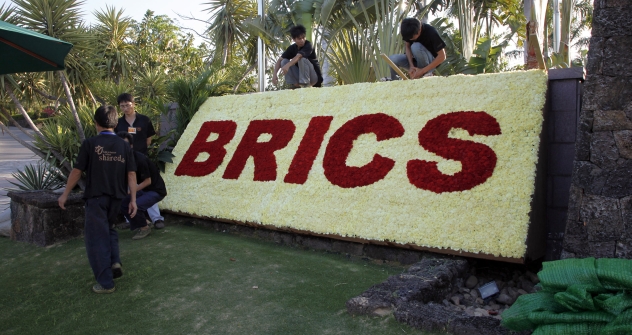 Russia is more susceptible than any other BRICS country to problems in the Eurozone, but the price of oil will make any effects more indirect.

According to experts, if the debt crisis in Europe escalates, all the world’s leading economies will suffer losses. Analysts at the Maplecroft Research Center have determined that the UK is the most vulnerable country, but four of the BRICS countries, including Russia, were included in the category of “extreme risk.”

Maplecroft analyzed data from 169 countries worldwide to create the Eurozone Exposure Index. The index rankings are based on trade and foreign direct investments (FDI) in the countries of the Eurozone, Euro area bank exposure, as well as state budget balance, national debt level, inflation rate and gold and foreign currency reserves.

BRICS is a catalyst for global governance reform

The UK's FDI into the Euro area and exposure in European banks accounting for 20 percent and 27 percent, respectively, of the national GDP. According to the index, a collapse of Spain and Italy could prompt a drop in UK export turnover and result in losses to Britain's banking sector accounting for 7 percent of the national GDP each. The weakness of the UK can also partially be explained by its domestic problems: a net public debt representing over 80 percent of GDP severely limits the UK's capacity for a large-scale fiscal response to the Eurozone crisis.

In addition to the UK, the top 10 countries considered under “extreme risk” include Poland, Hungary, the Czech Republic, Mauritania, Mozambique and Mauritius.  Developing countries were also considered severely vulnerable to the crisis according to the index.

According to the study, four BRICS countries are ranked in the “extreme risk” category: South Africa (49), Russia (50), Brazil (62) and India (85). China ranked 112, putting it in the “medium risk” zone. Neil Shearing, an expert from Capital Economics, explained:  “It is only natural that BRICS countries have no 100 percent immunity from the European disease. The Eurozone is rolling down into the recession, which would negatively affect other countries. It is the price the economies have to pay for the capitals’ integration.”

Other experts note that the crisis might change the direction of trade and investment flows. Mandy Kirby, associate director at Maplecroft, said: “Both economies and business may seek to manage this risk by diversifying trading patterns to account for lower demand, either in third countries or by concentrating on domestic markets.”

Even China has moved to secure itself against the crisis: In June, it agreed to transfer $43 billion to the IMF crisis-fighting fund. The country has also tried to diversify its export trade model but stimulating internal demand. Other BRICS countries also agreed to contribute to the fund, albeit with less substantial sums: Brazil, Russia and India promised to give $10 billion each and South Africa – $2 billion.

According to Dealogic, during the last five years, over 50 percent of BRICS transactions with developed countries involved Europe, although the second quarter results saw this indicator drop to 46 percent. Russia appeared to be oriented toward Europe than the others: 70 percent compared to 24 percent of China’s trade and investment. “Russia might suffer most of all as Europe remains its key trade partner, though recently it has tried to shift the focus to China,” said Shearing. “Negative effects for Russia will be rather indirect. First of all, it is about the oil price, which would drop due to the lower demand in the region.”