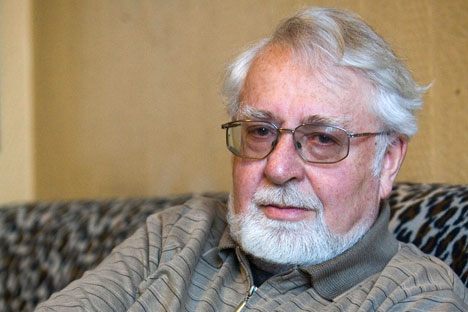 Experiments aimed at developing a “drug against aging” have been under way in Russia for several years.

The drug, called “Skulachev ions” (SkQ), has passed clinical tests and will be available in pharmacies as Visomitin, a drug that prevents age-related eye diseases. So far, it is used to treat dry eye syndrome. Alexei Torgashev of Russky Reporter spoke with Vladimir Skulachev, the inventor of the drug and head of the project about its potential.

Russky Reporter: Why did you choose the dry eye syndrome for your first clinical tests?

Vladimir Skulachev: There are two reasons. First, it is an incurable ailment and any success in treating an incurable disease is impressive: if it helps, there is no doubt about it. In accordance with our concept, many incurable diseases are not diseases in the first place; they are just part of the aging process. And the other reason is that, with the dry eye syndrome, we can only cure the symptoms, not the disease.

RR: What have the tests shown?

V.S.: The crucial point comes three weeks after the start of treatment, when the patients are asked if they have any complaints. With our drug, 60 percent of the patients said no, while with symptomatic treatment drugs only 20 percent had no complaints. I think if the tests had lasted longer, the percentage would have been still higher. We have been treating glaucoma and cataracts for six months and dozens of patients have shown no adverse effects. Incidentally, the dry eye syndrome was chosen by the Healthcare Ministry, not by us.

RR: They say you have used your drug to cure your own eyes.

V.S.: Yes, I have inherited bad eyes. I developed age-onset cataracts. Both eyes were affected, especially the right eye. I felt I could no longer read with my right eye. The doctor prescribed an operation to replace the lens. Instead, I took time out for a month and a half and started using our eye drops. Then I went to see the doctor and he prescribed an operation on one eye, after all. The trick is that our drug has no effect on very old rats. I decided that I was like an old rat. But God punished me for my lack of self-confidence. We did not operate on my second eye at once and, in the meantime, I continued to use our drops. I came back to the doctor some eight months later. He says, “Whatever happened to your cataracts? I don’t see any. You don’t need an operation.” Four years on, I still use the drops, and I have no cataracts.

RR: The main aim of the project is to develop “youth pills” to switch off the organism’s aging process. You are supposed to start clinical tests in the next few years. When exactly?

V.S.: We’ll try to start the tests next year.

RR: What will it be like? A man is not a rat: he lives a longtime. How can you determine whether the drug is effective?

V.S.: It will be basically treatment of some age-onset diseases, such as eye diseases. One can try taking pills instead of using eye drops. There are several options. We are doing very well healing wounds. Old people take ages to heal even a small scratch, and sometimes it ends up gangrenous. Our experiments on rats have shown that such age-related phenomena do not appear if you feed our drug to rats.

RR: What about some heart diseases? These are also age-related.

V.S.: Yes, it is next on our list. We have modeled several types of arrhythmia on our rats and they are all perfectly treatable. We have also seen some striking results in terms of behavior. One standard experiment is a raised cross-like labyrinth [two open and two tunnel-like paths elevated above the floor, used to study the level of anxiety and activity in rats]. Old animals spend most of their time in the closed part and, in general, prefer to stay in one place. Our rats in the labyrinth behave like young ones. It is not very clear what should be the analogue for humans, but I think psychologists will come up with some ideas.

RR: What is the underlying mechanism?

V.S.: My hypothesis is that, when the amount of food diminishes, some receptors within the organism register it in the blood. They perceive it as a threat of hunger. For the population, only an epidemic can be worse than famine. The organism faces a choice between mobilizing all its resources and finding food or dying. In this situation, all the non-necessary programs are switched off. The aging process is also non-necessary; it is only necessary for future generations. Unfortunately, the hunger signal triggers anxiety. It can be measured: usually a mouse on a treadmill runs no more than one kilometer and, when it gets the hunger signal, it can run eight kilometers and sometimes even drops dead from exhaustion. It tries to run away and find food. If our drug is used, there is no such effect because the receptors signal that everything is fine.

RR: The active substance in the eye drops is the same as in the “youth pill.” Has it occurred to you that people might just buy the drops and take them internally?

V.S.: There is very little of the substance, two nanograms, in a droplet. You would have to buy thousands of our vials, pour them into a glass and drink them the rest of your life instead of water. Perhaps some millionaire could afford it…

RR: There will be more substance in the pill?

V.S.: Yes, of course. We will count per kilogram of body weight. I am thinking about what to call the drug. You see, a medicine is a substance that helps the organism to fight a disease. We, on the other hand, are trying to prevent the organism from harming itself. It is, in fact, a battle against suicide. Our thinking is that there is some center that sends an aging signal to the cells, signals of slow suicide. The center is genetically programmed. We stop the signal spreading at the cellular level. If this is right, the drug should be taken all the time: as soon as you stop, the signal resumes, and your genes are still the same.

RR: Aren’t you afraid that the “youth pill” will overturn social life?

V.S.: Even if it does, it will change it for the better.

V.S.: Not necessarily. It can all be fixed politically, with strict rotation of personnel, for example. I am a biologist, not a politician. My business is to propose an idea. Something similar has already happened: today people live on average twice as long as in the 19th century.

RR: Yes, we have lived through one such revolution: antibiotics.

V.S.: But we have survived it. Not a single person has complained. And by the way, I am not suggesting that people will live 800 years. Whales, for example, do not age but mature with age and they live about 200 years. Apparently they have no aging process, but that does not mean that nothing untoward can happen to the organism. Some parts of it become worn. There are genuine aging diseases and I don’t think people will live to be 800. Incidentally, there is cancer, which our pill cannot cure, which means that everyone will live to be old enough to have cancer. So, it is not clear by how much we can prolong our lives, and this is not the main thing. The main thing is that the lamentable stratum of people who have become like infants if not intellectually, then physically, will disappear. We have managed this with animals. There is hope we will succeed with humans, too.