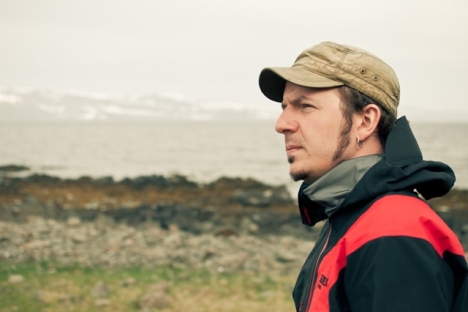 Marcel Krueger: "What most Westerners who have never been to Russia connect with are the stereotypes. I really want to put these stereotypes to the test." Source: Press Photo

A young German adventurer has begun a trip that will follow the route taken by his grandmother, who was relocated by the Red Army during World War II.

Marcel Krueger easily qualifies as the active type. The 34-year old writer and blogger, currently based in Berlin following five years spent in Ireland, does not like to spend too much time in one place. With a job as a copywriter for an Internet company and an active freelance practice, he does not appear at first glance to have much spare time for projects taken on just for fun. Nevertheless, he has already published a book – a collection of short stories and articles entitled StopComingtoMyHouse (“not as unwelcoming as it sounds,” he says) – and edited a travelogue on Icelandic music. Now Krueger has embarked on an exciting new adventure. InTheDarkNight is the name of the project that will take him to Poland and Russia, following the same route taken 67 years ago by his grandmother Cäcilie (or Cilly, as he affectionately called her), when she was forced to relocate from East Prussia to the Urals region during World War II as the Red Army invaded the region and rounded up the German population.

Krueger has undertaken the journey to honor the memory of Cilly, who died in 2009, as well as to learn more about this recent historical past that affected his family so deeply. Ilaria Parogni of Russia Beyond the Headlines spoke with Krueger a few days into his trip to find out more about the project.

Russia Beyond the Headlines: What gave you the idea of starting this new project?

Marcel Krueger: I carried the idea around with me for quite a while, at least 10 years. My grandmother spoke about her experiences in her motherland, East Prussia, and in Russia a lot when I was a child, so I always felt some kind of connection to both places, but never had the time to visit. With a lot of time on my hands this year I decided to finally travel to both Poland and Russia. The decision to document my trip online was an easy one: I realized a similar project two years ago together with German photographerKaiMueller, a journey to Iceland to the discovery of its music scene, which we documented in our web-projectSonicIceland. This time my focus is more on history and culture though. And I'm really bad at taking pictures.

RBTH: Your itinerary repeats the journey undertaken by your grandmother 67 years ago. What areas exactly are you going to visit?

M.K.: First, I will travel to the place where my grandmother came from, a small village called Łęgajny, near Olsztyn, in the Warmian-Marsurian voivodeship [province] of Poland. She was taken away from there by the Red Army in 1945 and transported to the Urals, where she stayed in two labor camps: one near Yekaterinburg and one in Nizhni Tagil – I will also visit these two places. But my journey has a touristic aspect too. As I'm in both Poland and Russia for the first time, I'm making a detour via Warsaw and Moscow to taste the vodka there...

RBTH: Let’s discuss the logistics of your trip. How long will it take to complete the journey? How will you get to places?

M.K.: I've estimated four weeks for the whole trip, two weeks in Poland and two weeks in Russia. And to stay loyal to the traveling conditions endured by my grandmother, I will also avoid flying as much as possible. I took the bus from Berlin to Gdansk, from there the train to Olsztyn, and then again I will take the train from Warsaw to Moscow and from there to Yekaterinburg. That gives me enough time for sightseeing and research on the ground. I'll spend roughly a week in both Olsztyn and Yekaterinburg. The only leg of my journey that involves flying is the return trip from Yekaterinburg to Berlin.

RBTH: You started your journey a few days ago. What places have you visited so far, and what were your first impressions?

M.K.: So far I've been to Gdansk and Olsztyn. Gdansk is a very beautiful city – especially when you consider that the old town has been rebuilt after it was totally destroyed during World War II – and it's full of positive energy. All the people were very polite and friendly. It is, however, a very touristic place. Olsztyn has a fair share of tourists from all over the world but, once you leave the old town behind, you see that it is very much a working town, the busy capital of the voivodeship, with the administration buildings and university located there. When you venture further afield, leaving the city and its busy commuter lanes behind, the area is actually quite tranquil, despite the fact that it's high season at the moment. Overall the area is very pleasant to the eye, with almost proverbial rolling wheat fields, dark woods and clear lakes.

RBTH: You haven’t reached Russia yet and this will be your first time in the country. What are you looking forward to the most?

M.K.: My answer might take a few hours. I think what most Westerners who have never been to Russia connect with are the stereotypes: the Moscow metro, the endless train journeys with the provodnitza [car attendant] providing tea and old babushkas selling potatoes on train platforms. I really want to put these stereotypes to the test. And I have the advantage that I have already arranged meetings with locals who agreed to show me around, like Luba Suslyakova, who runs the AskUral blog, and the guys behind the Tesnotawebzine.

RBTH: A big part of your project is dedicated to connecting with the people you meet while traveling. What encounters have had the biggest effect on you so far?

M.K.: That must have been the afternoon I spent with 87-year old GertrudMoritz, here in Olsztyn. She was also a victim of the Red Army invasion and spent some time in the same camp as my grandmother, in Nizhni Tagil. And even though the first impression I had of her was that of a nice old granny, she really is a tough cookie. At almost 90, she still cooks for the entire family – she had even prepared a cake to honor my visit... and reprimanded me for being late! But what was most impressive was how she made very clear that she felt no hate for what she had to go through, only gratitude for having made it home from the camps.

RBTH: During your journey you are keeping a blog, and you have created a  Facebook page and a Twitter feed dedicated to your endeavor. So far, what kind of responses have you been receiving from the people following you online?

M.K.: Only positive responses, especially from people of my age. I was really surprised to see how many people share a similar family history, and how many of those people have started their own research outside an academic framework. The same applies to my trip: I don't claim to write a complete history of that time, I only want to find out more about my grandmother and tell her story. And if I discover new countries on the way, even better.