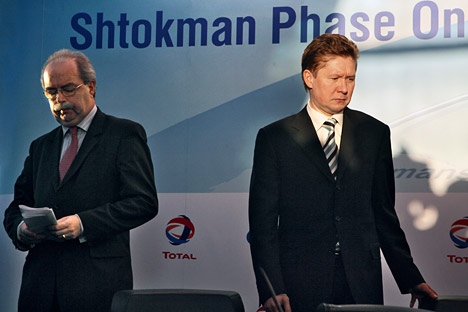 Norway’s Statoil has surrendered its 24 percent stake in Russia’s Shtokman Development to Gazprom, confirmed company spokesman Jannik Lindbæk. “We transferred the shares once the shareholders’ agreement expired on June 30, but we are still in talks with Gazprom and wish to continue working on this project, which we hope will become profitable,” Lindbæk said. Statoil CEO Helge Lund and Senior Vice President for Eurasia Torgeir Kydland have also resigned from Shtokman Development’s Board of Directors and Statoil has already written off its spending on the project. In its second-quarter financials, released on July 26, Statoil expensed $340 million worth of investments in Shtokman.

According to sources, no replacement for Statoil has been found, while Gazprom’s second foreign partner, Total, is also debating leaving the project. The French company is waiting for a Shtokman shareholders’ meeting scheduled for Aug. 30 August to discuss the issue.

The Shtokman gas condensate field in the Barents Sea holds 3.9 trillion cubic meters of category C1 gas reserves and 53.3 million tons of category C1 and C2 condensate reserves. Gazprom Dobycha Shelf holds a license for the field and the company had planned to carry out the first phase of the project jointly with foreign partners, before completing phases two and three on its own.

Gazprom, Total, and Statoil signed an agreement in 2008 to establish Shtokman Development. As part of the first phase of the project, the company was supposed to secure financing and build the infrastructure for delivering the Shtokman field’s gas onshore and liquefying it. Total received the right of veto on technical matters. As a result, Total and Gazprom developed technical solutions that were radically different. The French side insisted on carrying gas and condensate from the sea along a single pipeline, to be subsequently separated onshore, whereas the Russians said the gas and condensate should be separated immediately onboard the production vessel. The project participants spent several years looking into different arrangements. The Shtokman Development Board approved one of them, based on Total’s proposal, only in April 2011.

Uncertainty over future gas supplies and prices was, however, the main reason behind the project’s delays. Europe’s demand for gas has been shrinking since the start of development in the Shtokman field while Russia’s domestic gas prices remain too low to make further development profitable. Moreover, tax breaks for the project have taken too long to materialize. Pipeline gas deliveries were scheduled to begin in 2013 and LNG supplies in 2014. But the Shtokman Development Board voted in 2010 to push the timeline back to 2016-2017. Under the new plan, a final investment decision on production of pipeline-ready gas was due in March 2011 and on LNG production by the end of 2011, but Deputy Head of the Federal Subsoil Resources Management Agency Petr Sadovnik announced in February 2011 that launch of Shtokman operations might be postponed to 2018 at the request of the project participants.

In March, it was decided to liquefy 100 percent rather than half of the gas produced and to modify the project’s business model. The partners were invited to take part not only in the first phase but also in the subsequent phases. But this did not convince Statoil to stay on board.

Gazprom hopes to complete consultations on the configuration and terms for development of the Shtokman by the beginning of the fall. So far, however, not one of the project’s deadlines has been met. At this point, even Gazprom is lacking excitement over the Shtokman development. According to Gazprombank’s Alexander Nazarov, “previous arrangements and calculations no longer make sense as the market situation has changed.” In particular, whereas previously the project’s break-even point was to be reached at the oil price level of $80/bbl, it now exceeds $100/bbl, considering the changes in contract price calculation formulae for most Gazprom clients, inflation, and the cost of materials. Nazarov noted that, under such circumstances, Gazprom does not need the project, adding that its gas output continues to decline amid flagging demand, just as the gas monopoly is simultaneously launching production at other new fields, such as the Bovanenkovskoe.

This article can be read in the original Russian in Kommersant Daily.