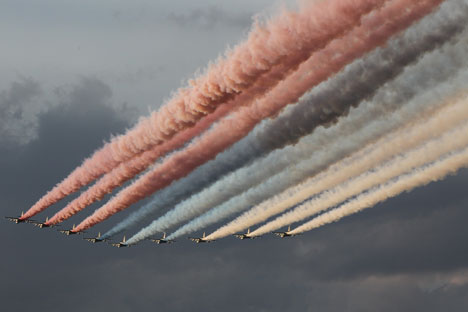 Russia's Air Forces has started celebrating its 100th anniversary in the beginning of this week. Source: Rossiyskaya Gazeta

In the 100 years since the Romanov family established the Russian air force, it has served in both war and peace and survived both the creation and collapse of the Soviet Union.

The Russian air force is 100 years old. In 1912, Grand Prince Alexander Mikhailovich Romanov declared: “The Russian air force should be stronger than that of our neighbors. This should be remembered by everyone to whom the military might of our Motherland is dear.” Aviation schools were opened in Sevastopol and Gatchina. A summer training course for volunteer officers from various branches of the armed forces was set up in these schools, and the trainees were instructed in theoretical disciplines at the St. Petersburg Polytechnical Institute.

The best Russian minds were drawn into aviation, and significant capital began to be invested in its development. In July 1914, the world’s first four-engine aircraft flew from St. Petersburg to Kiev and back, piloted by aircraft designer Igor Sikorsky.

By the beginning of World War I, the Russian army had 256 warplanes and 250 military pilots, from which 39 corps and fortress squadrons were formed. When military operations started, the aircraft were mainly engaged in carrying out airborne intelligence and correcting artillery fire. The pilots began to shoot down and ram enemy Albatross planes in the air on their own initiative. In December 1914, the world’s first squadron of heavy aircraft was set up by the Russian air force using Muromets planes.

In 1916, Grand Prince Alexander Romanov was appointed field inspector-general of the air force. Under his leadership, the separate corps and field aviation units were joined together in air combat groups. The tsar’s headquarters in Mogilev and St. Petersburg began to be protected from air strikes by planes and anti-aircraft artillery, and the rear support for the air force supplied it with everything it needed.

The celebration of the 100th anniversary of Russia's Air Forces. Source: Rossiyskaya Gazeta

However, the accomplishments of Russian aviation during the Great War were often forgotten in the subsequent chaos of the Russian Revolution and Civil War. Vladimir Lenin, chairman of the Soviet of People’s Commissars, sent anxious telegrams to the head of the field staff of the Revolutionary Military Soviet, including: “Can’t we use airplanes against the cavalry? For example, flying very low…”

But since those days, the Russian air force has trod a glorious road. The first heroes of the Soviet Union were the pilots who saved the crew of the S.S. Chelyuskin after it became trapped in ice between Murmansk and Vladivostok, and Russian pilots were the first to fly across the North Pole to the United States. But the most severe test for the Russian air force, as well as the country as a whole, was World War II, known in Russia as the Great Patriotic War. After some initial struggles in 1941 with the German Luftwaffe, the Soviet air force won control of the air. The Germans lost 72,000 planes on the Eastern Front, of which 56,000 were destroyed by Soviet pilots. The others were shot down by navy fighters and by anti-aircraft defenses. The Soviet air force also had the unique situation of including in its air force three air regiments (flying Pe-2s, Yak-3s and Po-2s) crewed by women pilots. Twenty-six of them became Heroes of the Soviet Union and of the Russian Federation.

During the Cold War, the Soviet air force flew far out over the ocean to gather intelligence on U.S. aircraft carriers, maintained watch in the air off the coasts of the United States, protected the country’s air space and shot down aircraft that violated it. They also played a role in the Soviet invasion and occupation of Afghanistan. In the 1980s, the Soviet air force reached the pinnacle of its strength. This army of the air was deployed from Berlin to Sakhalin. Capable of all-weather and supersonic, missile-launching and long-range operations, it included 500,000 military personnel, 30,000 military pilots, 13,000 planes and 6,000 helicopters. Personnel for the air forces of the Soviet armed forces and of the friendly Warsaw Pact countries were trained in eight special air force schools, 20 aviation colleges and two military academies.

After the fall of the Soviet Union, the system had to be adjusted to a new reality. In May 1992, the Russian air force began as a new body, with a severe reduction in the numbers of personnel and aircraft. It was not an easy time. Military personnel were not paid for months, there was not enough fuel for combat training, and there were 40,000 air force families with nowhere to life. Nevertheless, dozens of air training regiments in the west of the country were re-equipped with Mig-29 and Su-27 planes, and a restructuring based on Russia’s the military districts took place. Dozens of military towns were built for air force personnel. Then came other challenging times, including the onset of the Chechen war and the merging of the air force and the air defense force into a single air force.

In the opening years of this new century, the Russian air force has been working to restore its former power in the air. Today combat forces have enough aviation fuel, and aviation equipment and weapons are being modernized. Money has been allocated to the development of promising aviation systems to re-arm Russia’s front-line, long-distance and military transport aviation. The international links between the Russian aviation industry and partner states are being strengthened. Additionally, there has been a marked increase in the material well being of military personnel and veterans of the armed forces. And so the great flight of the Russian air force continues.

Pyotr Deynekinis an army general and former commander-in-chief of the Russian air force.

This article can be read in the original Russian in the Nezavisimoye Voyennoye Obozreniye review.