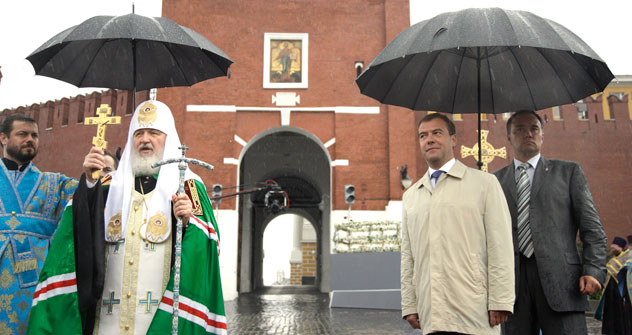 The engagement between the church and the state peaked during the election campaign and is unlikely to keep growing, according to some experts. Source: ITAR-TASS

While Russians are divided in their opinions on the Russian Orthodox Church role in public life, experts make guesses as to what extent the church should be involved in politics.

At least half of the Russian population believes that the Russian Orthodox Church (ROC) influences politics in Russia, while a quarter of respondents want the church to be more active in addressing issues considered important to the state.

Polls: Russians argue whether Orthodox Church should stay out of politics or not

Surveys from the All-Russia Center for the Study of Public Opinion (VTsIOM) show that the number of Russians who believe the Russian Orthodox Church influences domestic politics has been growing over the past 24 months. The most recent studies from the center show that 50 percent of respondents consider the church to have an influence over Russian politics, compared with 44 percent in 2010. Moreover, 12 percent of respondents believe the church has a "significant" influence on state policy.

In the last six months, the church has found itself in the middle of a variety of political events, the most notorious being the case of Pussy Riot, the punk group that took over the altar of Moscow’s Christ the Savior Cathedral on Feb. 21 and sang a “punk prayer” called “Holy Mother, Chase Putin Away.” The members of Pussy Riot are currently on trial for hooliganism and a verdict in the case is expected Aug. 17.

There are other examples as well. On Feb. 26, Russian Orthodox Patriarch Kirill took part in the congress of the All-Russia People’s Front, a body created by President Vladimir Putin in the run-up to last December’s State Duma Elections. And, on June 16, Russian Prime Minister Dmitry Medvedev told the general council of the ruling United Russia party that the state needed to draw on “values that are traditional in our state and society – supported by public morals, supported by the church.” 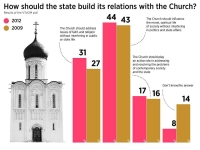 According to VTsIOM General Director Valery Fyodorov, those who are against increased involvement of the church in politics are, for the most part, those who “do not approve of the work of the president and the government,” but he categorizes them mostly as supporters of traditional opposition parties, including the Communist Party of the Russian Federation (KPRF) and the Just Russia party, rather than the kind of people who took to the streets this winter. Fyodorov notes that there is another group that calls for a strengthening the role of the church – they believe that the state must be “Orthodox.” “These are the people who believe that morals should be promoted, as should harmony of the state and society,” Fyodorov said.

Even those who are not supporters of the church believe that there should be institutions that serve to unite and consolidate society, according to Valery Solovey, a professor at the Moscow State Institute of Foreign Relations (MGIMO).

This may be so, but Mikhail Vinogradov, president of the St. Petersburg Politics Fund, says that support for the church is unlikely to increase in the near future. Dmitry Orlov, a political expert and member of the Public Chamber agrees. According to him, the engagement between the church and the state peaked during the election campaign and is unlikely to keep growing. “As a conservative institution, the church is engaged and used by the authorities,” Orlov said.

This article is abridaged and first published in Russian in Komemrsant Daily.