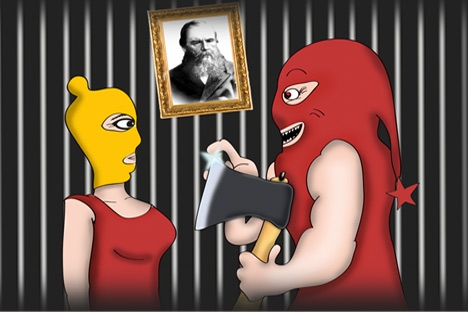 Reactions to the trial of a punk group show how far Russia and the West have grown from each other.

Russia and the West have entered a new phase in the clash of civilizations. This is demonstrated by the trial of the punk group Pussy Riot. People in the West think that Russia has gone back to the Middle Ages and that the singers are being tried for criticizing the regime. The Western public assumes, as the letter from a group of well-known rock musicians in defense of the punk group shows, that the protest by the singers in the Cathedral of Christ the Savior is legitimate from the point of view of civil law and contemporary art, and that it is illegal to keep the young women in detention for half a year.

The liberal West, the heir to Roman law, reminds Russia that freedom of speech, as well as the protection of minority rights, is indisputable in modern Europe and more important than anything else. These rights should be recognized by Russia as well as by Syria, Egypt, Ukraine, Hungary and other countries where conflicts in the area of human rights are currently being observed. If a state lacks a critical mass of civil society, then that country is not modern and can become an international pariah.

In broad and predominantly conservative sections of Russian society, which only 20 years ago returned to religious consciousness and Orthodox traditions, the blasphemous performance by the singers in the country’s main cathedral evoked, on the contrary, a response of total rejection and implacable aggression. Russia, in religious terms the heir of Byzantium, will not accept a letter of the law if the current law contradicts its perception of morality and justice. Russia criticizes the West for replacing its traditional Christian culture with the pseudo-morality of liberal values. While the West has long been living in a post-Christian civilization, Russia, on the contrary, is returning to the lost origins of Christian Europe.

The West, which used to criticize the atheist authorities in Russia during the Cold War for destroying religion, is now accusing the Russian Orthodox Church for an excess of fundamentalism. People in Russia, however, believe that the religious feelings of the majority of Russian believers, who themselves were not entitled to practice their faith for almost the entire 20th century, should also be protected from blasphemy and sacrilege. In the Protestant churches of Europe, rock concerts and dances are allowed and women can have access to the altar, but in Russia the centuries-old dogmas of Christianity are still treated with profound piety. Russia reminds the West that in Greece, which is still part of Europe, women are forbidden to visit the holy Mount Athos. Those who break the law are punished severely.

The worldviews of the West and Russia have pretty much swapped places. But even in Russia itself, society is not homogeneous. While two-thirds of the population adhere to views that could be described as conservative and traditional, one-third – mainly the educated new middle class – looks at the Pussy Riot trial through Western eyes. These people want to live in the way people do in Europe; Russia, with its “special world view” is alien to them. The number of “educated Westerners” is growing rapidly, and in the next generation, they will constitute the majority of Russians.

As for the Pussy Riot singers themselves, the correct decision would probably be suggested by the great classic and expert on the “complex Russian soul,” Fyodor Dostoyevsky. He would recommend the young women defendants to repent sincerely and go and confess to a priest. After this the priest would be able to forgive them their sin. The Orthodox Church could then make the sign of the cross over the Pussy Riot case and put an end to it.

But in the modern world, and especially in politics – and the singers’ case has already reached the sphere of high-level international politics – nothing is that simple. The strength of feeling between a West that does not understand Russia and a Russia that rejects Western teachings will grow. The conflict between the two civilizations will also agitate the young post-communist Russian society. The Russian authorities need to understand that. This complex situation can only be clarified by dialogue between the authorities and all sectors of society. True, civil society in Russia is by no means developing only on liberal soil.

The “student revolution” took place in Germany and France 23 years after the end of the Second World War. One of its causes was the desire of the younger educated generation born after the war to have a stronger influence on their countries’ politics and social systems. Another cause was the desire to make a rapid transition from the vestiges of the authoritarian pre-war past to liberal values. In actual fact, the student revolution of 1968 did not happen. The authorities met the protesters half way on some points, while also intimidating society with the “communist threat” from the East. The state institutions stood their ground, public order was soon restored, and people were fully immersed in their everyday life and consumerism. It cannot be ruled out that a similar outcome awaits the current Russian passions.

Alexander Rarh is the leading Russian-German expert on politics and the role of the political elite in post-Soviet Russia. He is the Director of the Berthold Beitz Center for Russia, Ukraine, Belarus and Central Asia.