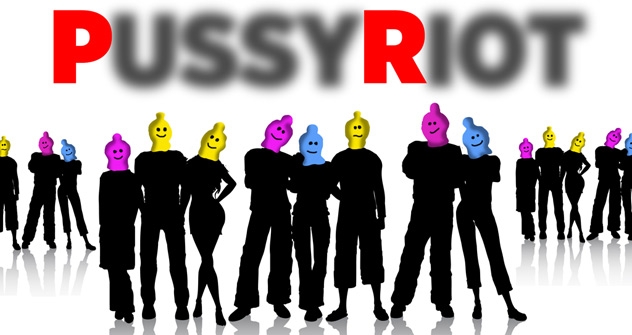 John Freedman of the Moscow Times shares his impressions from his encounter with the Pussy Riot members.

Whatever I might read about the members of Pussy Riot, I'll never believe for a minute that they are "silly" or mere "hooligans."

Who doesn't have an opinion about Pussy Riot, the punk feminists who are currently in custody awaiting a trial that could bring them a sentence of seven years in prison?

Their supporters, of which there are legions, consider them heroines of Russia's recent political protest movement. That notion gained considerable weight when in April, Amnesty International declared the women in the punk band prisoners of conscience.

Their detractors, of which there are no fewer legions, consider them heretics, hooligans, criminals, charlatans and/or "silly little girls."

For the record, a few facts.

Pussy Riot emerged from a group of highly politicized artists called Voina, or War. That group, with factions in St. Petersburg and Moscow, existed more or less as one group until 2009, when internal friction caused it to split in two. The Moscow-based collective, a loose conglomeration of dozens of members, is nominally headed by Pyotr Verzilov, the husband of Nadezhda Tolokonnikova, a founding member of Pussy Riot.

The notion of a political punk band called Pussy Riot reportedly arose in March 2011 when the female members of Voina began studying the feminist punk group Riot Grrrl. In the fall, Pussy Riot mounted several protest-performance acts that usually were posted on YouTube. Their most famous stunt was done in February 2012 at Christ the Savior Cathedral. It depicted four women praying, dancing and singing a song with the refrain of "Mother of God, cast Putin out." It was for this that three of the women were arrested in March and have been held in custody ever since, threatened with up to seven years in prison. Other members of the group have eluded arrest.

I can say one thing about Nadezhda Tolokonnikova and Yekaterina Samutsevich, two of the women now awaiting trial. "Stupid," "silly," or "fake" would have been the last words to come to mind after I saw them at an event titled "The Artist and Authority: War or Peace" at the Joseph Beuys Theater on Dec. 8, 2011.

Representing the Voina group that evening, they took part in a discussion on whether artists should collaborate with the state or not. Four representatives of Voina, representing the "no" vote on that question, sat across a table from the two founding members of the relatively scandalous Blue Noses group of artists founded in 1999 by Vyacheslav Mizin and Alexander Shaburin. They were there to say that they saw no reason why an artist should lose independence by participating in government-funded programs.

My point here is not to restage that fight eight months later, but rather to shed a few dim rays of light on the way that Samutsevich and Tolokonnikova carried themselves that evening.

Both were severe and unwavering in their opinions, to the point, perhaps, of demonstrating a lack of а sense of humor. While Shaburin went on at length telling anecdotes about being picked up by limousines paid for by the Culture Ministry and occasionally drawing unusually large honorariums for work, the women often sat stone-faced and judgmental in their seats, or whispered between themselves.

When asked about their activities and to what extent they considered themselves artists, Tolokonnikova responded plainly that members of Voina were artists only insofar as they had "something to say politically." Art is pointless without a political message, she declared, adding that one cannot remain politically or artistically independent while collaborating with the authorities.

What Shaburin and Mizin saw as a harmless game, Tolokonnikova and Samutsevich unmistakably saw as the road to compromising not only one's personal integrity, but the integrity of the art.

Many in the audience that night were incredulous when the four representatives of Voina, after huddling among themselves, stood and declared that they were leaving because they had "another appointment" to attend. Ignoring entreaties to remain, they turned and marched out briskly. I am tempted to say they did it demonstratively in a way that almost looked planned or rehearsed.

I don't mean to say that they actually rehearsed their exit that evening, but that they clearly understood the visual and emotional impact of making a bold statement — "we're leaving" — and then making a quick exit. It essentially was a performance, a small work of art, if you will. It is the one outstanding thing I remember happening that night.

These people knew what they were doing; they seemed to understand why they were doing it; and they gave the impression that they knew how it could best be done. For all the jocular jabbering and light-hearted showing of slightly naughty short films that the Blue Nose group engaged in that evening, they came across as insignificant and self-indulgent. The members of Voina, on the other hand, occasionally looked rather haughty and so serious as to be dour. But they wore the stamp of purpose in their gazes.