Mtsensk: A resilient town of Lace and Lady Macbeth 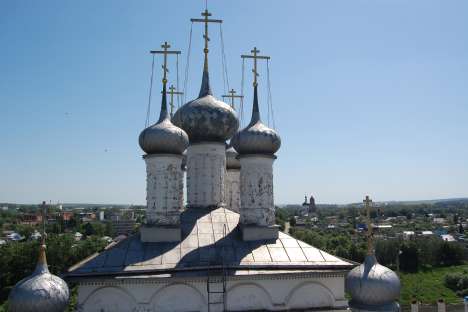 Although many of the town’s churches were destroyed during the Soviet era, many monasteries survives. Source: Lori / Legion Media.

A short trip from Moscow, the town of Mtsensk has more to offer than Dmitri Shostakovich let on.

The central Russian town of Mtsensk is best known outside Russia from Dmitry Shostakovich’s opera, “Lady Macbeth of Mtsensk District.” Mtsensk, which stands on the Zusha River, 30 miles from the city of Orel, is proud of its past. It has suffered war and desecration over the centuries, but has managed to maintain its own literary and architectural history.

Shostakovich based his Lady Macbeth on Katerina Izmailova, the heroine of a novel by Nikolai Leskov. You can see the house where she might have lived in Sovietskaya Street, 10. The building is now the town’s police department, appropriately enough given the opera’s murderous plot, with its poisoning, strangling and drowning in icy rivers.

“Lady Macbeth of Mtsensk District” is not the town’s only literary connection. Playwright and novelist Ivan Turgenev lived at Spasskoe-Lutovinovo, a village nine miles away. This country estate was the setting for one the most productive periods of the writer's life and is now the Turgenev Memorial Museum.

The area’s natural beauty also inspired the Russian poet Afanasy Fet, who was born in the district in 1820 and mentions Mtsensk in his lyrical poetry, including the now locally famous “house with lions.” Mikhail Lermontov and Leo Tolstoy are among the great writers who have visited the town. Lermontov was visiting his friend Mikhail Glebov, who became his second in Lermontov’s deadly duel with Nikolai Martynov.

Perhaps more than its literary connections, the town is known for its lace manufacturing. The town has been making lace since the 18th century; Mtsensk lace was worn at the Russian imperial court, in England and in Turkey. Three centuries ago, more than 1,000 craftswomen worked in Russia’s largest lace factory just outside the town, and in 1899 Princess Tenisheva opened a lace school for local girls. Vologda lace may be better known, but Mtsensk still trains new generations of lace-makers and manufactures its award-winning lace today.

The origins of the town’s unusual name, with its far-too-many consonants, are lost in the smoky wastelands of history. It could come from the Finnish word “metnsan” meaning “forest town,” except that the Slavs pre-dated the Finno-Ugric tribes in the area. Mtsensk is first mentioned in the chronicles of ancient Rus in 1146, which – as residents proudly point out – is a year before Moscow. At that time it was already a fortified border town in the Chernigov Principality.

By the 19th century, Mtsensk had become one of Russia’s largest exporters of grain, shipping it out along the then-navigable Zusha tributary to the mighty Oka River, but the prosperous town suffered during the 20th century. Mtsensk was taken by German troops in 1941 and suffered under the occupation for two years before its liberation in the brutal Battle of Kursk in the summer of 1943.

Trucks and church towers: a brief tour of Mtsensk

Today, the famous ZiL manufacturer makes truck engines in the town, but modern Mtsensk is not all factories; some historic buildings still stand. For visitors arriving at the 19th century train station, it’s just a short walk to the historic city center on the left bank of the Zusha. Although many of the town’s churches were destroyed during the Soviet era, the Peter and Paul monastery survives. Founded in the 16th century as the Petrovsky monastery, it is an interesting architectural complex with a turbulent history.

The 17th-century Church of the Ascension is another of Mtsensk’s architectural treasures, standing on the site of a convent that burned down in 1695. The church was the first stone building reconstructed after the fire and the only one that survived the closure of the Ascension Convent in 1764. In 1945, it was nearly demolished when the Simferopol highway was built. Local enthusiasts saved it by insisting that the Ascension church once belonged to a nobleman called Pushka, ancestor of the poet.

Three more churches are located slightly upstream: the remains of the early 19th-century Church of St. George; Chapel of St. Nicholas, which was built in 1996 to replace a cathedral that was blown up in the 1930s; and the fully restored 17th century bell tower and five domes of the St. Peter Monastery’s gate church. The church was also closed in the 1930s, but was given back to believers in 1947 and is now a thriving symbol of the town’s resilience and pride in its traditions.

This article has been abridged from the original Russian version, which is available in Russian in Travel.ria.