Evgeny Satanovsky: The threat of a military conflict with Iran is real 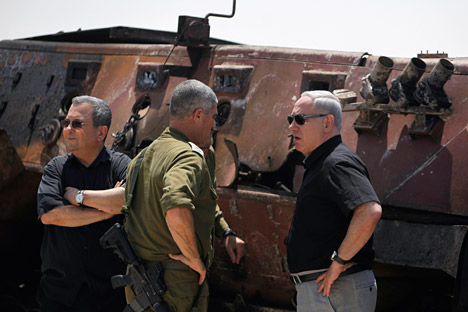 Russia expert believes a war between the Islamic republic and Israel will break out in the first half of 2013.

A war against Iran is inevitable and it is likely to break out sometime in the first half of 2013, says Yevgeny Satanovsky, president of the Institute of the Middle East. The onset of such a military conflict will bring new opportunities for Russia, including the chance to make additional profit from the inevitable oil price hikes.

Satanovsky’s comments were prompted by extremely harsh statements coming out of the Middle East last week about Iran, including unprecedented descriptions of possible combat operations against the Islamic republic.

Kommersant reports that Israeli Prime Minister Benjamin Netanyahu called the Iranian issue the nation’s priority and presented a report on “building up the country’s defenses” during the last month. Minister of Internal Security Yitzhak Aharonovich said the police and fire service were fully ready, while the former Minister for Home Front Defense Matan Vilnai predicted that the war would turn into a 30-day clash on several fronts, including Iran, the Gaza Strip and Lebanon. He assured the Israelis that the Iron Dome and Hetz air defense systems would provide the required protection for Israel.

“The probability of a war against Iran as of today is 100 percent. It is hard to say whether this will be a purely Iran-Israel conflict, because Iran’s main geopolitical opponents include the monarchies of the Arabian Peninsula,” Satanovsky said, adding the rumble of comments is like hearing thunder and understanding that a storm is on its way. “We can already hear the thunder,” Satanovsky said.

Satanovsky believes there are several possible scenarios for the military operation. “It is hard to say now whether the war will start in September or October, like many experts predict, if Israel attacks the Iranian nuclear complex, or if Iran will deliver a preventive strike on Israel using its potential, or between January and July, i.e., between the presidential elections in the United States and Iran,” Satanovsky said.

The U.S. will elect its President in November 2012, but the President-elect will be inaugurated and form his administration only in January 2013. Iran’s next presidential election is scheduled for July 2013.

Asked which of the two timeframes was the likelier for a military operation to be launched, Satanovsky said: “I would put 15 percent on an autumn war, 70 percent on one between the elections, and there is a 5 percent chance that nothing will happen.”

Satanovsky believes a war is necessary to clarify the power structure in the Middle East. “Without a war, there will be no saying which country is the main player in the Islamic world and, especially, in the Persian Gulf. The developments observed in the Arab world and beyond, given the interests of Iran and Pakistan, Afghanistan, North Africa and more distant players, suggest that a war is inevitable. Iran has been entrapped in the ideological component of the Islamic revolution (in Iran), the pivot of the Iranian ideology that is founded on the concept that Israel is the root of all evil in this world and, if there were no Israel, it would be much better, so the state of Israel should be eliminated. Israel doesn’t want to be destroyed, but what country does?” Satanovsky said.

U.S. government: no need to worry over possible sanctions

He noted the ongoing rocket attacks and Iran-inspired terrorist sabotage, as well as the fact that Israel’s two latest wars were against Iran as more indicators that Israel was preparing for war.

“This is an aggressive nation of men of faith, and their leaders gladly use any weapons they have,” Satanovsky said.

Asked whether the chances were high that Israel would attack Iran alone, the expert said: “this is quite likely. But it is clear that America will eventually get involved,” he added.

“Apart from the Israeli experience proper, they [the Israelis] have the experience of WWII. They are perfectly aware that the so-called world community, the United Nations and others, will betray anyone. Taking this into account and having this experience, they will rely exclusively on their own security. They have been developing the Israeli nuclear program for this. Day X is almost there,” Satanovsky said.

He believes that Russia’s role in this potential conflict will be to act as observer and advisor, because “the conflict has nothing to do with us.”

“The only thing that Russia should do is get ready to filter Iranian refugees, who will flow into Russia directly through the Astrakhan Region and Dagestan or via Azerbaijan and Armenia, and then use planes or cars. We will have to filter them to see whether there are many people capable of doing bad things in Russia,” Satanovsky said.

According to Satanovsky, “if someone in the Army of the Guardians of the Islamic Revolution gets this idea, they will turn the North Caucasus into South Lebanon within two or three months.” “Our Iranian ‘friends’ and ‘allies’ have warned us many times,” he said.

“Furthermore, we need to have our purses wide open and get ready for big money, as oil prices will definitely hike. We would like to see Qatar have big problems with transport of its LNG tankers globally, because it has already bitten off a quarter of our European market and is getting ready to bite off even more,” Satanovsky said.

The expert adds that the military operation will “slow Iran’s engagement in the Nabucco gas pipeline bypassing Russia”, which is another benefit for Russia as it promotes its South Stream alternative.