The collective unconscious of Steve Jobs 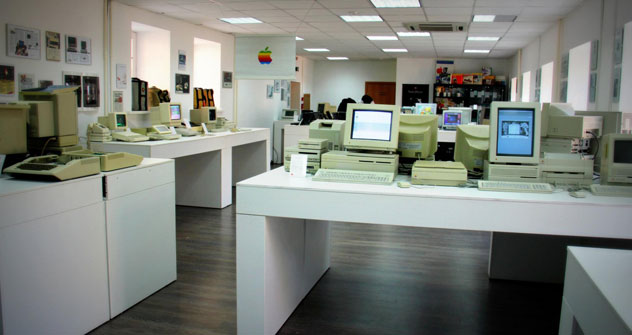 Andrei Antonov made a museum from his own collection of Apple-devices. Source:Pressphoto

Beyond the standard set of tourist museums in Moscow there is one that would seem more at home in Silicon Valley. This is the Apple History Museum.

Located in an ordinary gray office building, the only indication of its connection with Apple is a small apple glued to the wall by the door. Beyond the door, however, is a stylized version of an Apple store. Rare Apple products have been arranged in the snow-white space: from computers and accessories to a variety of knick-knacks with the Apple logo.

All the museum exhibits belong to Andrei Antonov - a fan of Apple for more than 15 years of experience. In the mid-1990s, Antonov worked with DPI, which was at the time a distributor of Apple products. While he worked there, the company offered a promotion: return an old Apple computer and get a discount on a new one. As customers brought in their old computers, however, Antonov did not throw then away. Instead he began to collect them. By the beginning of 2012, Antonov had collected an entire museum. Evgeny Butman, the founder of the re:Store network of official Apple resellers in Russia, provided Antonov with the space for the museum.

The space itself is like a paradise for the Apple fan. The museum showcases the entire history of the Apple product line and – from the legendary Apple II, considered one of the most successful PCs, to the Newton Messagepad, Apple's first attempt in the tablet computer market (17 years before the first iPad) – every device works and can be used. The computers are loaded with typesetting and word processing programs that are 20 years old. Several computers are also loaded with vintage game connected to the company's joysticks.

Antonov himself will readily talk about any of the devices from his collection as well as the history of the Apple company. Many visitors have no conception of what Apple products were like before the 2000s and most do not know that Steve Jobs did not always work at Apple. The collection contains particularly rare items, for example, the 20th Anniversary Macintosh, an all-in-one PC with built-in speakers and a Bose subwoofer. Its design looked futuristic when it appeared in 1997; it cost about $7,000. Another gem is a pair of sunglasses in which the lenses are color Apple logos. Only 30 were made for a corporate party.

The company has a special history in Russia. Deliveries of Apple equipment to the Soviet Union were officially banned until 1991 because Macintosh computers allowed for writing programs that could control missiles. However, some enthusiasts were able to obtain computers by roundabout ways. A majority of the programs were translated into Russian by the enthusiasts themselves. Even today there are still no official Apple stores in Russia and many Apple fans prefer to buy devices abroad.

Andrei Antonov has many more exhibits than he can show in his museum and soon he hopes to increase the size of his exhibit. He sees his role in educating visitors about the history of Apple. And, of course, nothing can give greater pleasure to lovers of old equipment than to play the original "Prince of Persia" on an old-school Macintosh. And to listen to the grinding of disks at the same time.