Wake up to a stranger’s voice 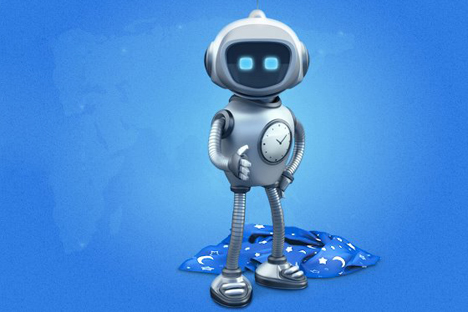 The Sleeper sets the wake-up time and goes to sleep, and a random Budist will then call him/her when it’s time. Source: budist.ru

Early birds wake up easily, always in a good mood, while night owls find waking up early a challenge. Since the world generally works on the schedule of these early birds, those who prefer to sleep late have tested many different theories to make waking up more pleasant. The latest trend is the belief that a phone call from a stranger will get a night owl out of bed. This idea forms the basis of Budist, the first wake-up service in the Russian Internet.

The idea of the service is that strangers will call each other on their cell phones to wake each other up. A subscriber simply has to set a time and he or she will receive a call from another person. All calls are anonymous and people conversing are usually of the opposite sex, which adds a bit more anticipation to the call.

All that is required to register for the service is a cell phone number where a text message with the access code will be sent. After receiving the access code, users will have to accept the terms and conditions of the service and fill in such fields as name, date of birth, e-mail and gender. Once activated, the service allows the user to wake someone up or set his/her own wake-up time. Within the service, any user is either a Sleeper (someone who will receive calls to wake up) or a Budist (someone who calls others to wake them up). Being both is also possible. The Sleeper sets the wake-up time and goes to sleep, and a random Budist will then call him/her when it’s time. If one Budist fails to wake up a Sleeper for whatever reason, it will be done by some other user, or, if there are no Budists available, the call will be made by the robot Budya. Sometimes the call will be made with the voice of a celebrity. For example, on March 8, Budist used the recording of Nikita Dzhigurda to call its Sleepers, and the popular entertainer work up and congratulated over 2,000 female users. Sleepers and Budists are expected to follow a certain etiquette in their calls. For example, the recommended conversation starters are:

Whatever follows next is improvised – it can be a song, a short poem or a funny story. Anything is good as long as users keep in mind that the service promotes good manners a friendly attitude and positive feelings. Conversations can be no longer than two minutes long.

The My Wake-up Time tab allows the user to set no more than two wake-up times (with a five minute window) for five days ahead. The Budist who wants to wake up a Sleeper just needs to sign up for any time convenient. The Budist will then receive a call from the robot Budya who will connect him/her to a Sleeper. Users can also call Sleepers directly from the site. To do so, they have to press the Make a Call button in the Wake the Sleeper Up tab and it will make a PC to phone call. In this case the user will need to use a headset with a microphone.

The Recordings tab allows the user to listen to his/her own conversations and the interesting dialogues between other Budists and Sleepers. These recordings are published only with consent of both parties. It is recommended that only funny or particularly unique conversations be shared publicly. Once approved by the moderator, the audio recording will be available for public listening. Every public recording has a Share button, which makes it possible to send the recording to VKontakte and Twitter accounts. The Comments tab features feedback from users of the service.

The site administrators assure users that phone numbers are never revealed because all calls are made via the online service.

The article is abridged from the original Russian, which was first published in the magazine Itogi.