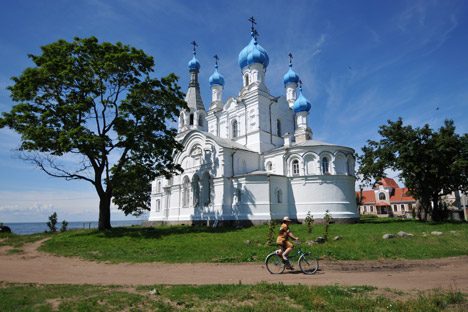 A lot of average Russians simply don’t think about the Pussy Riot case nearly as much as it would appear from the outside. Source: ITAR-TASS.

It was a week since a Russian court sentenced three women members of Pussy Riot to two years hard time over their anti-Kremlin “punk prayer” in a Moscow cathedral – and Father Boris, a priest in a rural church about 100 km from the Russian capital, had other things on his mind.

“I don’t think about it,” he said of the Pussy Riot affair. “I serve, and that’s that. It’s all overblown anyway.”

For the last four years, his church – which stood near a river overlooking a spectacular meadow – had been undergoing strenuous renovation. Built in 1841, like many rural churches it was all but destroyed in the first few decades of Communist rule – standing in ruins as goats grazed nearby. As Father Boris spoke, construction work continued, and a bearded worker welded away.

“What can we do if there’s politics? Nothing. We are about faith,” he said, smiling.

His resigned attitude would have been unusual among the protest-minded middle class, but here, outside Moscow, it was normal. Contrary to a split in society that many in the opposition have feared, a lot of average Russians simply don’t think about the Pussy Riot case nearly as much as it would appear from the outside. That isn’t because they are not civic-minded – but because they are busy with other problems.

“It’s scandalous, what they did, and they should be punished,” said Elena, a music teacher who volunteers in the church’s choir on weekends. “Maybe the sentence was too harsh, but that’s up to the judge. As for whether it’s political or not, that’s up to them to decide, I’m not privy to that,” she said.

For the West, Pussy Riot’s antics were seen largely through the prism of a political, feminist revolt: four women donning balaclavas of all colors and lip synching a punk song aimed against President Vladimir Putin with lyrics that included “Holy Sh*t” in a Church, only to post the result on YouTube. Striking a chord with Russia’s protest-minded middle class, the case gained unprecedented publicity abroad and has been heralded as a pivotal point in Russia’s political development.

But a closer look shows that the issue is still very much confined to a statistically small middle class.

According to a study released by the Levada Center on the day of the verdict August 17, some 44 percent of respondents said they believed the Pussy Riot trial was “fair, objective and unbiased.” Just 25 percent believed that the trial was the result of personal revenge on the part of the Orthodox Church and the Kremlin, while 41 percent believed that the trial was a reflection of the fact that so many Orthodox Christians felt insulted by Pussy Riot’s performance.

“Yes, there is a wave, there is a heated reaction. But I wouldn’t say that all of society has reacted that way,” Lev Gudkov, the head of the Levada polling center, was quoted by Gazeta.ru as saying. “Only about 15-18 percent of people are paying attention, the rest remain pretty apathetic to the case.”

Russians are making sense of the implications of the case – like the relationship between Church and State and whether the two are too close in Russia – but each in their own way.

“The trial has exposed existing problems, but these are different problems in different places,” says Andrei Zolotov, a Moscow-based journalist specializing in religious affairs.  “For instance, in the Voronezh region, local residents aren’t as concerned about Pussy Riot as they are about plans to develop a nickel mine in the area. The protest movement has mobilized against these plans in much the same way as they have around the parliamentary and presidential elections in Moscow. Most importantly, just like with the Pussy Riot case, many locals are concerned about the role of the Church. Is it on the side of the people, or on the side of the authorities? This question has started becoming relevant in a lot of conflicts between society and the authorities.”

If society is split, then it isn’t so much on whether the members of Pussy Riot should go to jail, but on larger issues that have existed long before the case emerged.

Artyom Toropov, a Moscow lawyer who has attended this year’s spate of anti-government protest rallies, expressed a moderate view of the Kremlin and its actions, but he was concerned over the gap between himself and a large part of the population.

“I’m frightened by the reaction of the people – that 40-60 people believe that it was a fair trial.” he said.

“If the West considered how the masses at large are reacting, then they’d see we’re back to the question of 19th century Russia: the enlightened nobility and the general population which largely did not support them.”