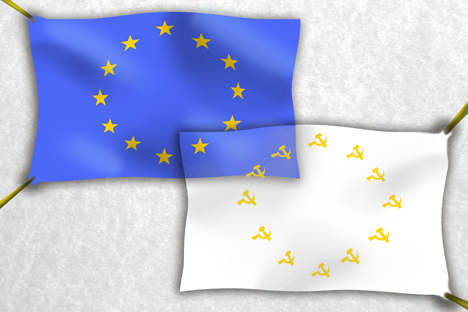 Putin’s plan to create a Eurasian Union may actually not be a bad idea, but the proof will be in the implementation.

The idea of a Eurasian Union, which was proposed by Vladimir Putin when he regained the presidency and thus clearly constitutes a priority, is without doubt going to be a major discussion during the upcoming fall political season. Yet the concept seems to have become quite diluted in the year since Putin proposed it in one of his election campaign op-eds.  More precisely, the idea of the Eurasian Union is based on a number of misconceptions that have arisen because the project’s authors themselves do not quite realize what it means.

The concept has dual intent: it wants to be like the EU, but definitively not the EU.

Once past the verbal hype, it becomes clear that in fact the organization has nothing to do with Eurasia and has everything to do with a single country, which incidentally is situated in Europe of all places: Ukraine. The key task of the Eurasian Union is to draw Kiev into the integration project. At the same time, getting Kiev onboard would give the existing organization that the new union will be based on – the Customs Union – a totally different format. If Ukraine, with its vast market and a potentially strong and diversified economy, joins the Customs Union, it will become a serious structure that everyone else will have to take into account.

It would seem that the Eurasian space per se, i.e., Central Asia, is only marginally on the mind of the project’s proponents. This is hardly surprising, since, from the economic point of view, the most likely candidates for membership, Kyrgyzstan and Tajikistan, will bring at least as many problems as benefits.

So, for a long time to come, the Eurasian dimension is likely to be confined to capable and resource-rich Kazakhstan. Moreover, it is being repeated over and over again that the Eurasian Union is not a closed structure, but an element of a future common space extending from Lisbon to Busan, where markets from Europe all the way to the Pacific will happily come together. This makes the idea look less like an isolationist project and more something exactly opposite.

A Eurasian Union growing out of the Customs Union is a utilitarian undertaking. Its objective is to expand markets and rebuild some of the manufacturing chains destroyed by the collapse of the Soviet
Union, all by reproducing on this territory the European integration principles dating back to the second half of the 20th century. Its catalyst is the deep crisis within the European Union, which will inevitably be dealing exclusively with its own internal problems for the foreseeable future and not paying much attention to neighboring countries. Plus, the idea itself is totally reasonable and might have a future.

This, however, marks the beginning of yet another misconception: the lack of any clear project vision by its architects. Whenever there is a shell devoid of any meaningful content, it starts to fill up all by itself, absorbing whatever is in the air. And our air is filled with residual pro-Soviet rhetoric, complete with a healthy dose of nostalgia – sincere for some or artificially and self-servingly fanned by others – for the mighty Union of yesteryear.

The proponents of the Eurasian Union lack a language for describing this structure in modern terms. The comparisons with European integration mentioned in its program documents, albeit somewhat evasively, may serve as an add-on, but a core is still needed. Yet, since a holistic picture is lacking, be it shared values or common geopolitical interests of the partners, the argumentation tends to slip back into the usual reminiscences of how great life used to be back in the day.

Other former Union republics do not quite share Russia’s nostalgia for the common Soviet past. While Russia mourns the loss of her might, the others celebrate the birth of their sovereignty. Of course, every post-Soviet country is home to many people who have lost a lot over the last 20 years and would happily return to the “golden age”. But their ranks are dwindling as new generations that no longer remember that age come along. And, to be sure, members of the ruling class in any former Soviet republic would not welcome those daydreams either; naturally, they are not interested in losing their own legitimacy.

Meanwhile, Eurasian integration is special in that it is based, to an even greater extent than European integration, on agreements between leaders, which means that and suggestion of the erstwhile “center–periphery” system of relations is hardly a good idea.

What’s more, if Moscow had, indeed, aspired to recreate some sort of Soviet Union, this rhetoric would have at least made some sense. But nobody is actually trying to do this and the corresponding set of emotions and arguments is exactly that: a haphazard filling of the vacuum with whatever comes to hand.

The proposed Eurasian Union is not what it appears to be superficially. It is not a political embodiment of the “great steppe” nor is it a reincarnation of the USSR, and it is only marginally an alternative to the European Union. If the project continues – and the political will to promote it is very strong – its shell is likely to become filled with some more tangible content, while the potential benefits will push its participants to find an ideological framework. Until then, the Eurasian Union will be yet another brilliant illustration of the transitory state of the Russian mindset, which has clearly started drifting away from its former imperial matrix, but still cannot and does not want to admit as much.

Fyodor Lukyanov is Editor-in-Chief of the Russia in Global Affairs magazine.