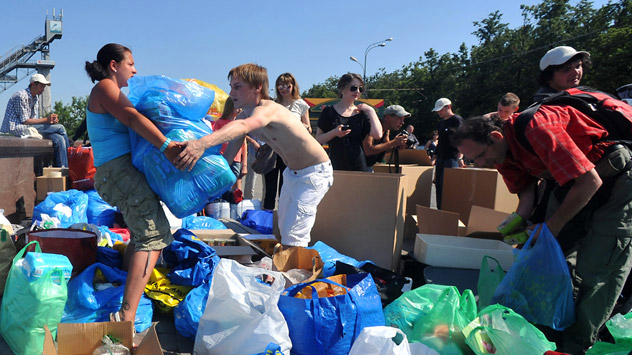 Volunteers sorting through humanitarian aid collected by city residents for victims of floods in Kuban on the observation square at Moscow State University in Moscow. Source: RIA Novosti / Alexander Utkin.

The recent flash floods in the Krasnodar region resulted in mass deaths, damaged property, and general devastation – but they also demonstrated that volunteer movements are on the rise in Russia.

People came to Krymsk, the town that suffered the most from the flooding, from all over the country. Some cancelled their vacation plans on nearby Black Sea beaches and rolled up their sleeves to help with clean-up operations and provide much-needed water, and food. Locals in Krymsk told the media that compared to the afteremath of a flood that rocked the region in 2002, the volunteer effort was huge.

According to recent research on civil society conducted by the Levada Center, many young Russians believe that in the age of the Internet, organizing and coordinating volunteer efforts has become much easier. And the Internet, whose reach continues to grow in Russia, helps people stay connected to each other, exchange ideas and work toward worthwhile causes.

Technical progress is not the only reason for the rise of volunteerism in the country. “Having been released from humiliating poverty which had been forced upon them, and the need to survive… as well as with the emergence of a certain level of freedom, Russians are growing more eager to communicate with other people,” Boris Dubin, head of socio-political research at Levada, was quoted as saying by RIA Novosti. “[Russians’] tolerance, and their interest and positive outlook have all increased.”

Then came the so-called “wild 1990s,” when individualism with a distinctly cynical bent flourished and attainment of prosperity was seen as the ultimate goal.

In today’s Russia, in spite of various social problems, people join volunteer organizations because they finally recognize that they can make a difference – and are getting back to a spirit of community, one that is not forced upon them by the state.

Irina Mersiyanova, the director of the Center for Civil Society and Non-profit Sector Studies at the Higher School of Economics in Moscow, said that beside the headline-grabbing events such as the tragedy in Krymsk or the wildfires of 2010, quiet, day-today volunteer work now goes on in most parts of Russia without much fanfare.

“There are many volunteer organizations that are out there working every day,” Mersiyanova said. She added that volunteer groups now comprise a large sector of civil society in Russia.

A proposed new law on volunteerism, that would legalize the work of Russian volunteers by making them sign contracts with their respective organizations, has been worrying for some.

Opposition politician Ilya Ponomaryov, for example, told Moskovskiye Novosti that the proposed law is a reaction to the fact that volunteer efforts often make the government look bad – by underscoring its incapability to deal with a disaster such as the flooding in Krymsk.

Yet experts say that it’s too early to tell how the law may impact Russian volunteers – particularly as a draft has yet to be written.

“I would like to see a law that would help different types of volunteerism in our country to develop – and not stifle informal volunteerism by regulating the activities of non-profit organizations,” Irina Mersiyanova of the Higher School of Economics told The Moscow News.

According to Mersiyanova, about three percent of Russians officially volunteer through nonprofit organizations, while it is estimated that at least a third of the population are non-registered volunteers. The people in the latter group often don’t want to draw media attention to their work – and neither do they wish to register their activities.

Putting in the time

Volunteer activities range from one-time actions to regular work put in over longer periods of time. Visiting orphanages or retirement homes, for example, often requires a steady commitment from conscientious volunteers – because both the children and the old folks need to be able to establish relationships with their visitors.

The Moscow-based Vverkh organization helps teenagers living in state care and in so-called “problem households” get ready for independent life – the children can attend free classes, prepare for their final exams, participate in discussion clubs and performances, and make new friends.

The Russian Big Brothers/ Big Sisters mentoring program is a part of an international mentoring movement, that recruits young people who connect with orphans and kids with disabilities. Spending time together, the mentors and the mentored are meant to form lasting bonds that allow for both better socialization and simple friendship to take root.

Such organizations, whose members commit to them for the long haul, are a testament to the fact that volunteerism in Russia is no passing trend – but a major cornerstone of Russia’s developing civil society.

“After the 2010 wild fires, the volunteer movement in Russia began to develop more actively – people felt that anything can happen, no matter how protected they may be, and that it is better to stick together and help each other. For many of these people, [the volunteer] lifestyle became an everyday norm.”

“It is amazing to see how different the psychological state of children from an orphanage is. The values are slightly shifted, and the understanding of human relations is not what you expect. [These children] are different, but they have to live in a society where no one bothers to put themselves in their shoes… After getting involved with this program, I am more willing to consider adopting a child.”

“For me it all started with a trip to an orphanage in the village of Yelatma, in Ryazan region… By sheer accident, I saw a post on the Vkontakte social network about a trip to an orphanage, and decided to participate… We organized an economics game in the orphanage… For the kids, some ideas seemed very new: such as the possibility of keeping your money in a bank. We could feel that they were limited by the walls of the orphanage, but happy to learn something new.”