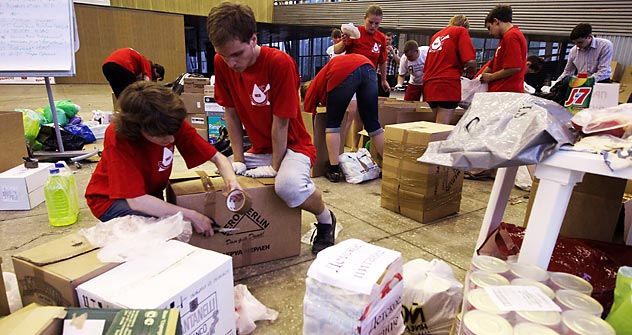 A new proposal from Russia's Public Chamber will require aid organizations to sign contracts with volunteers.

Russia’s Public Chamber has proposed that volunteers be allowed to work under contract. The suggestion is intended to help volunteers coordinate the terms of their work with legal agencies and simplify accounting procedures, yet representatives of NGOs are skeptical about the move.

Grigory Kuksin, head of the Greenpeace Russia fire safety project thinks that formalizing volunteering could have the effect of discouraging Russia’s burgeoning volunteer movement. “The practice of passing laws aimed at promoting volunteer activities is highly negative in this country, as witnessed by the law on voluntary fire control activities. There are lingering fears that the law will be aimed rather at introducing additional bureaucratic problems,” Kuksin said.

Darya Miloslavskaya, head of the Russian Lawyers for Civil Society council, which drafted the law, said that the rationale behind the proposal was the need to “streamline volunteers’ spending.” “It is unfair when a person goes to help someone and then the price of the ticket is considered to be his income and the volunteer has to pay 13 percent income tax on it,” Miloslavskaya explained.

Video: Volunteers from Kazan try to feed all the hungry

Russia’s new battle cry: How can we help each other?

The initiative has the backing of the dominant United Russia party. The opposition, however, suspects that there are deeper political motives behind the proposed law. Ilya Ponomaryov, a Duma deputy from the Just Russia party, believes that the authorities are moving against volunteers following the response to the floods in Krasnodar Territory.

“People have become more active. Of course, this is connected with the events in Krymsk. The authorities are angry to find themselves in the public spotlight. They found a response, like they did with the law on NGOs, the law on public rallies,” said Ponomaryov.

The measure will not come before the State Duma until the fall session. Sergei Zheleznyak, the deputy speaker of the State Duma and a United Russia member, said: “We invite volunteer organizations to formulate their proposals in a calm manner. Undoubtedly, most of them have their own distinctive features, which the law must reflect. The autumn session will not open until September and all the proposals made will be considered and taken into account.”

Members of volunteer organizations are generally critical of the idea. “The concept says that volunteers are individuals acting on behalf of legal entities. In other words, they see them as an appendage to a registered legal centre of volunteers that sends people to various places at its discretion. That is a fundamentally wrong interpretation of what the volunteer movement is all about,” said Yevgeny Grekov, founder of an unregistered organization called Volunteers on Wheels. Grekov attributes the appearance of the new concept to “the wish of the authorities to control everyone” and “to make it more difficult for individuals to interact horizontally.”

Mitya Aleshkovsky, a photographer who volunteered in Krymsk called the draft law “utter rubbish.” “Nothing could be worse for the volunteer movement,” Aleshkovsky said. “Let them first get their own act together, the Emergencies Ministry, the warning systems, before meddling in the self-organization of the public. Bureaucracy is good only for bureaucrats and not for those who really want to help other people. The draft speaks of the need to conclude a contract between an organization and a volunteer. That is simply impossible: some come to help for just one day; some have no documents. People believe us and not the state. Companies and sponsors call us and not the state when they need help. As soon as the state steps in, any good deed becomes mired in red tape and theft.”

This story was complied from reporting by the newspaper Kommersant and Kommersant FM radio.