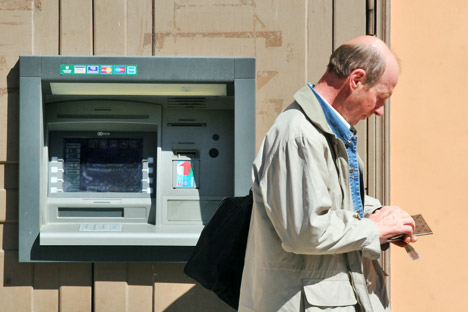 Recent Mastercard research has shown that Russians have begun use of their bank cards more actively. Source: ITAR TASS.

An overwhelming majority of Russians use credit cards, according to a recent survey by MasterCard. Experts are predicting further growth in “plastic”, noting, however, that widespread credit card use may worsen payment discipline among bank clients.

Only a quarter of all Russians do not use credit cards, say specialists at MasterCard. Most Russians (83 percent) receive their wages through direct deposit, and the share of debit card accounts that were opened rose from 11 percent to 19 percent. Meanwhile, 16 percent of all Russians received credit cards, and 12 percent of those polled said they had social-discount cards. According to the findings of MasterCard specialists, the number of Russians in possession of banks cards rose to a total of 74 percent last year. This figure is up 11 percent from 2010.

When asked why they prefer to pay by bank card, 60 percent of the respondents mentioned bonuses and the convenience factor, 58 percent liked the security and speed of credit purchases, and 34 percent cited the advantage of being able to shop for goods and services online.

Research has also shown that Russians have begun use of their bank cards more actively. This year’s poll found that 40 percent of respondents paid for purchases with plastic cards, as compared to 27 percent the previous year. In the near future, the number of Russians in possession of credit cards will grow significantly, says Sberbank’s director of client relations, Olga Bakhtina.

“A credit card is something that allows a person to proceed without a moment’s hesitation, without a worry, to have access to a credit account and know only two things: that the credit card bill must be paid on time and that nothing but the card need trouble you. The use of credit cards will soon overtake the use of debit cards because credit cards are more convenient. It’s my hope that, in two or three years, none of us will be carrying around more cash in our wallets than is necessary to buy lunch,” Bakhtina says.

However, a dramatic increase in the number of credit cards in Russia has a flip side as well. In particular, consumers do not always realistically assess their ability to pay their credit card bill, says Pavel Samiev, deputy director of Expert RA, a leading, national rating agency in Russia. Research has shown that the average sum of a bill paid by credit card has decreased from 2,500 rubles ($78) to 2,200 rubles ($68).

“Of late we’ve been hearing a lot of fairly alarmist forecasts concerning the fast growth of credit card volumes and of retail crediting in general. As a rule, retail is a hit with banks. It is the most interesting segment from the point of view of growth potential and current growth rates. According to some prognoses, this may lead to an abrupt increase in delayed payments and to a substantial deterioration in payment discipline, thereby adding problems to those that still exist in the wake of the international financial crisis,” Samiev says.

The 2008 crisis was, in large part, a function of the mass issuing of credit and the inability on the part of clients to repay them. However, banks have significantly improved their system for assessing candidates for loans, experts say. Retail crediting should not lead to a crisis scenario.

This article can be read in the original Russian in Kommersant FM.