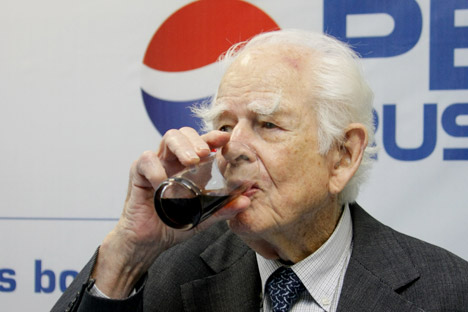 David Speedie, director of the program on U.S. Global Engagement at Carnegie Council for Ethics in International Affairs, interviewed former chairman and CEO of PepsiCo Donald Kendall about his work in Russia and his hopes for the country’s future.

Donald Kendall: Actually, I was running our international company, and our friends in Atlanta [Coca Cola] had Western Europe. They went in after World War II. I decided, why not go after Eastern Europe and Russia from a marketing standpoint? It was during [President Dwight] Eisenhower’s time, and Eisenhower wanted to try and get relations started between Russia and the United States. The United States had an exhibit in Russia and Russians came over and had an exhibit here.

[Richard] Nixon asked me to participate in this. I went over there with Nixon and gave [Soviet Premier Nikita] Khrushchev his first Pepsi and met the Russians and found out that they're wonderful people and wound up trying to get involved. We started opening up the first plants in 1972.

I got very involved in Russia at that point because I was convinced it was a great opportunity for the United States and Russia to get together, because their people were wonderful people. They had some lousy management at times, but, on the other hand, we occasionally had bad management too.

D.S.: Who were some of the other companies that were in the forefront in those days?

D.K.: There were companies that went over. They didn't all get involved. Companies like IBM went over. Some of their people were actually excited about the opportunities. But not many of them followed up for a while. It was a slow process, but there are a lot of companies over there today.

D.S.: You say in this interview that I'm quoting from, which was actually in Itogi magazine in Russia, "From the 1970s I learned in order to become a good salesman you have to know your product perfectly, you have to believe strongly in it, you have to befriend your buyer, and get to know his or her strengths and weaknesses, and of course you have to maintain good terms with your customer over the long term."

That's good common-sense advice. I would imagine that served you well in dealing with the Soviet Union and Russia over all these years. You were moving into a very different country, a very different environment from the home base, so to speak.

D.S.: Well, once you travel to Russia and spend some time over there, when you really meet people, you find out that they're wonderful people and people you can work with.

That's why I decided I wanted to get a program started, not only selling Pepsi, but I wanted to get the relationship started. Russia today is the biggest market we have outside the United States. We have over 30,000 employees over there.

D.S.: There is a great mutual respect between you and Vladimir Putin, once again the president of Russia for a third term. He gave you the Order of Friendship, which is the highest civilian honor. Talk a little bit about Putin as a man, as a leader, as someone that you've dealt with on a one-to-one basis.

D.K.: As you know, when Putin took over after Yeltsin, Yeltsin had left a real mess. Things had really gotten screwed up. I think it was unbelievable what Putin accomplished. If you look at the record going back to where Putin started and what it is today, how can you question Putin and his ability and his skill given that the economy and the lives of the people have improved so much from the time that he took over? People are glad to have Putin back because of his record, what he's done. I think he will continue to improve things.

D.S.: I think we have a tendency to view things as we want to see them. Putin is not always willing to do the United States's bidding, and that makes him unpopular here. But he's doing what he thinks is in Russia's interest. But also, we tend to see things through the eyes of just Moscow, the center. The fact is that Putin in the election won every single electoral district in the presidential election except for Moscow, where he got in the high 40s I think.

So he is, as you correctly say, very much the representative of the Russian people at this time, whether we like it or not. He is the president of Russia, democratically elected.

D.K.: The thing that you have to realize over here that is the problem is that people hear nothing but negative things about Russia because of our press. They never tell any of the good stories. That's why I was very anxious to get a U.S.-Russia council set up, and also get a program going of getting the young people. I started to put up money to finance a program of Russian students coming to the United States and American students going over there so that this young generation could see what's really happening in the two countries. We've got to find a way to get more information out to the public so they can really see the true story.

D.S.: Do you think there's a certain holdover from the Cold War at work here, in the sense that we still can't quite shake off the notion of the Soviet Union, even though it's broken up? I have to tell you that I have heard more than one member of Congress talk about "the Soviets," meaning the Russians, these days. It seems that we can't quite get that Soviet-era mentality behind us. There's something about Russia that makes Congress irrational.

D.K.: In the Congress you've got too many of these people that don't know anything about Russia, what's going on today. They're just living in the past. As long as you've got those people there who continue to live in the past, it's not going to change until we get them out of there.

D.S.: Although I know you're not involved in day-by-day operations at this point with Pepsi at all, how do you see doing business with Russia these days? Obviously, one hears about corruption, with rule of law, governance issues, and so on. How do you see the business climate, or what do you hear from others you know who are working in Russia at the moment?

I think you hear a lot of things. People have just heard rumors or heard stories and never heard any good. If you talk to people who are really operating over there, you will find out that they're not having troubles in Russia, any more problems than you have anywhere else.

D.S.: To the extent that you've been able to talk to Putin about relations between the two countries, is he well disposed towards the United States in your opinion? Does he look for a good relationship?

D.K.: Putin would like to see a good relationship. The problem is that statements keep coming out over here that are negative that make it very difficult. If we could get somebody finally that would really make an effort to start a relationship, we'd get it. That's true of any kind of relationship. If you do nothing but say negative things about a country, how are you going to get a relationship with them?

D. S.: When you hear about regarding Russia as a strategic enemy, you wonder. You scratch your head and think, "What's going on here? This doesn't make any sense." Among the top 10 largest economies in the world they're now about to be in the World Trade Organization—that's imminent—it just seems to be totally in our interest in every conceivable way to have a good relationship with Russia; not just to be nice to Russia, but for ourselves.

You obviously feel that way, with 30,000 people there, the largest food and beverage retail chain. I don't have to sell you on this. You've led the way. But it just seems so obvious that a good relationship with Russia is in our own interest, not just theirs.

D. K.: That's right. It's the biggest market we have outside the United State.

This interview is reprinted with the permission of the Carnegie Council for Ethics in International Affairs. The interview in its entirety can be read on their website.