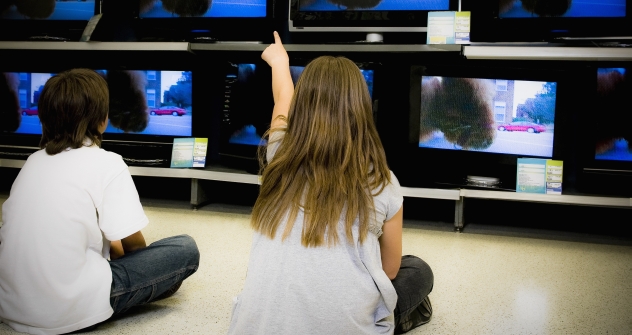 The Federal Law “On protection of children from information harmful to their health and development” specifies what kind of information cannot be shown to children who have not reached a certain age. Source:Getty Images

As RBTH found out, a law aimed at protecting children from harmful information is not as absurd as critics claim.

Starting on Sept. 1, Russian television channels will classify films and programs by age groups. Broadcasting companies have already prepared for the introduction of “18+” and other similar signs, but disputes are still sharp. The only party showing a calm attitude towards the situation is children themselves.

On September 1, 2012, the Federal Law “On protection of children from information harmful to their health and development” – similar to the current laws in many other countries of the world – came into effect. The law specifies what kind of information cannot be shown to children who have not reached a certain age: starting from the age of six, children can watch short, unrealistic scenes featuring severe diseases; from the age of 12, unrealistic scenes featuring violence, scenes featuring drinking alcohol and smoking, and scenes that mention drugs without demonstrating them will be okay for viewing; from the age of 16, children are allowed to hear certain swear words that are not listed as obscene.

According to the same law, programs and TV shows broadcasted by Russian television are to be labeled with a special sign that denotes the age of viewers for whom the content is intended. Broadcasting times for certain programs are limited, as well. Thus, films of the 18+ category are to be shown only after 11:00pm.

Russian authorities suggest that the taking of this legal measure is no different from the experiences of other countries of the world. Still, the law has been actively discussed for several years already, while passing all necessary endorsement procedures in the State Duma and, subsequently, coming into effect.

Legal pundits do not protest against the idea of protecting children from adult programming, but many of them are concerned about the law’s details. “TV and radio broadcasters are not against the new law, but we’d like it to be applied correctly right from the beginning. If it comes into effect being not fully developed, it will make the situation worse for everybody,” says Natalya Piskunova, general director of the National Association of Broadcasters. As usual, the devil is in the details. According to experts, wording chosen by Russian legislators could lead to hundreds of complicated collisions.

One of the clearest examples of this involves old Soviet cartoons, which brought up several generations of Russians. If the letter of the law is followed strictly, then many of these cartoons are most likely to fall into the 18+ category. Some may even share the fate of the film “Clip”, which was prohibited by Russian authorities for excessive obscenity. Of course, there are no erotic scenes in cartoons, but there are racy characters, such as crocodile Gena or the wolf from “Nu, pogodi!” (Hey, wait up!) – the Russian equivalent of “Tom and Jerry”. Formally, TV broadcasters do not have much of a choice: they will have to cut certain scenes or put some children’s cartoons into an adult category.

In this context, the polemics expressed in Russia’s Izvestia newspaper are quite serious. “If they act strictly according to this law, cartoons with crocodile Gena and other Russian cartoons – including mine as well – will be equated with pornography,” famous Russian animator Garri Bardin said. One of the supporters of the new law – Deputy Sergei Zheleznyak – had a different opinion on the matter. “According to the law, cartoons featuring scenes with smoking, for example, are to undergo an examination by experts. If they confirm that this scene of the cartoon may encourage viewers to try cigarettes, it won’t be shown to small children,” Zheleznyak said.

It should be mentioned that other countries faced the same problem as well. For example, in 2003, American broadcasters had to cut quite a number of scenes in old American cartoons, which were considered socially acceptable at the time they were created, but had become harmful or offensive by the views of modern society. Censorship in the U.S. was applied to cigarettes and alcohol, as well as to politically incorrect indications of characters’ race, gender and nationality. In 2006, notorious scenes of “Tom and Jerry” featuring smoking were cut in the UK, as well.

Russian cartoons will not face that destiny, as Aleksander Zharov, head of the Federal Service for Supervision in the Sphere of Telecom, Information Technologies and Mass Communications (Roskomnadzor), told RBTH. “Our position is quite clear. The cartoon ‘Nu, pogodi!’ and all products of the same type are cultural values in our country, so there is no need to limit their broadcasting or into label these products,” Zharov said. However, the authorities cannot guarantee the untouchable status of all cartoons, and Zharov reminds parents that, in any case, the final word in the discussion about what their children can and cannot watch and rests with them.

So far, children themselves feel no harm from watching animations with smoking wolves and racy crocodiles. However, as a study held by Moskovskye Novosti newspaper showed, some children are troubled by many other films and TV programs. “I’m frightened by programs where they show sick children, when they have operations, when there is blood. I don’t like watching operations on animals either. I don’t want to watch such things, it’s scary,” ten-year-old Kristina says of her fears, adding: “They should also ban detective films and all kinds of criminal news.”

Five-year-old Arina, on the contrary, says that she enjoys watching the news. She is already following the recommendations issued by Roskomnadzor. “I only watch the TV programs that my mom permits. For example, the program “Karusel”, the cartoon “Madagascar” and cartoons about Mickey Mouse— they are not scary and not harmful,” Kristina told journalists.

It is still too early to speak of an end to the dispute between the two camps feuding over the censorship law. As the head of Roskomnadzor explained, for the first month the law will only be applied in an initial test mode. “We’ll discuss and analyze each disputable issue. We have been consulting with mass media representatives for several weeks already, in order to work out a single approach that would be efficient, on the one hand, and acceptable for the mass media, on the other hand,” Zharov said. In the middle of October the department plans to sum up the results of the “test mode” and announce their verdict concerning any further application of the new law.

“Everything depends on how the new law is implemented. Obviously, it simply doesn’t make sense to subject Soviet cartoons that everyone loves to censorship. In cartoons, as in art as a whole, there are many characters whose behavior cannot be positive all the time. Art is a reflection of our reality, where there is always both good and evil. In children’s stories there are always monsters that will be conquered by the forces of good. This is part of the educational process – the child learns how to distinguish between good and bad. Even something that can frighten a child doesn’t necessarily injure the child’s health. Children are often frightened, and they need to be able to deal with the feeling of fear. We need to teach children how to react properly to unexpected and frightening situations, just as we teach them to pick themselves up after a fall. It’s unwise to seriously believe that we can keep children wrapped up in cotton wool, protect them from everything negative and show them the world as nice happy pictures without harming their development.”

“A child’s level of development and the way in which a child is brought up depend, above all, on the child’s parents. Censorship should be within each parent. After all, it’s your child and you’re in charge. You decide what he can watch and what is not worth watching. Unfortunately, the negative information that our children are exposed to is not limited to cartoons. Apart from television programming, we have the society in which our children are brought up: the kindergartens, schools, streets and backyards. These are places where they can also pick up everything that’s not good for their character. We can prevent characters in films from smoking, but a child can go onto a playground and see a mother sitting on a bench and smoking. It’s not films that make the biggest impression on children but parents who smoke and aren’t ashamed to drink beer in the presence of a young person. It’s not about censorship at all. It’s all about the upbringing of society, about us ourselves and the way we ourselves behave. If we’re saying that we must bring up children from their earliest years and instill some kind of moral values in them, we must, first of all, breathe new life into our family and social values and traditions.”