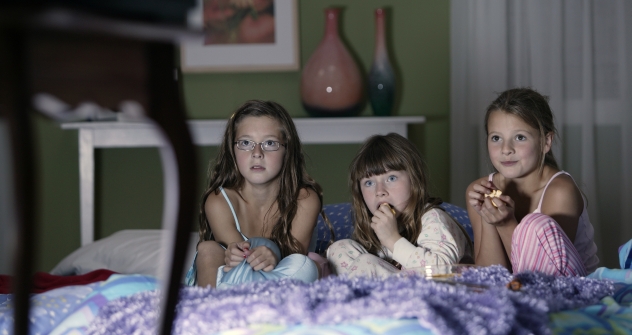 Russia's TV channels will have to comply with the requirements imposed by the federal law that aims at "protecting children from information detrimental to their health and development.” Source: Getty Images / Fotobank

Starting on Sept. 1, all Russian TV channels will be required to rate their programs as appropriate for certain ages. Now they are preparing to introduce the 12+, 16+ and other categories. Content owners will break programming down by age group.

On Sept. 1, a new federal law called “On protecting children from information detrimental to their health and development” comes into effect. The law defines the age at which children should be introduced in a public format to certain types of information. For example, starting at the age of six, children will be able to watch short video fragments showing serious diseases; from 12, they will be allowed to see scenes showing violence; scenes of characters drinking and smoking; and scenes where drugs are mentioned, but never shown. From 16, they will be allowed to hear obscene language. All in all, the list of permissions/bans focuses on 1- points.

The law also stipulates that programming and TV shows broadcast by Russian TV channels will have to be labeled with a special sign indicating the age of the viewers for which the content is intended. The rules for showing the sign, which were developed by the Ministry of Communications and the Media, will take force immediately upon registration with the Ministry of Justice.

CTC Media, the owner of the entertainment channels CTC, Domashny and Perets, is currently working to create a special division that will include both specialists with TV editorial experience who understand the ins and outs of creating TV content, and experts in child psychology, pedagogy and linguistics.

According to a statement from the CTC Media Press Office: “We believe that, by combining such vastly different competences, we will be able to achieve maximum performance efficiency for the division.”

The Rossiya channel has decided to do without any special services, instead assigning current employees with the task of grading programs and shows for various age groups. On Expert TV, a special working, group led by the Programming Director, has been assigned the task.  REN TV, in turn, is currently deciding how it will deal with the law’s requirements, said channel press secretary Stasya Shulga.

Only big TV companies will be able to afford to employ dedicated specialists and psychologists to cope with the requirements, said Viktor Kulikov, editor-in-chief of the cable TV channel Tver Segodnya (Tver Today).

“On our regional TV channel Tver Today, I will be personally responsible for tagging programs with a specific sign,” Kulikov said. “And I believe my colleagues from other channels will do the same. Whether or not we will be required to set up a commission including teachers, psychologists, doctors and veterans is a different question. Such a requirement might cause difficulties, since it’s not always possible to find the required experts out in the regions.”

For now, the draft regulation of the Ministry of Communications and the Media merely states briefly that content broadcasters or producers have the authority to rank the programming.

Meanwhile, the children’s TV channel Karusel anticipates no difficulties in recommending shows for certain age groups. According to the channel’s general director, Nikolai Dubovoi, Karusel’s content is already created and selected with the assistance of child psychologists, teachers and pediatricians. They already provide age-related recommendations for each show.

“We are now in the midst of preparing our programming for the new TV season. With this law in mind, this includes consulting lawyers,” Dubovoi said. On Karusel, those responsible for the programming content are the editor-in-chief and chief producer.

TV companies are unanimous that labeling shows with a certain sign will present no technical challenge. The draft regulation sets out the requirements for the sign and limits its minimum air time (to eight seconds) but does not regulate its design. Designers at CTC Media, for example, have already worked out the design for each of its three TV channels, guided not only by the provisions of the law but also the general look and feel and marketing concepts of the channels.