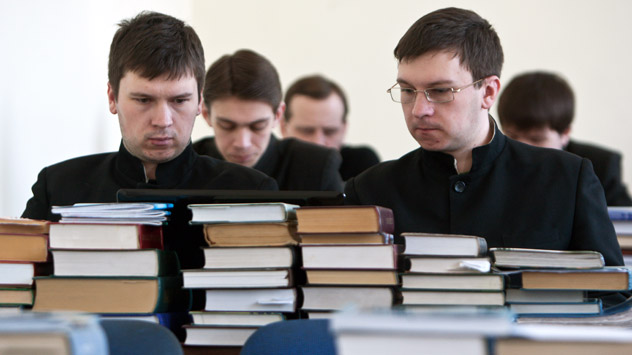 The department of theology needs to be financed by the church community, not governmental organizations, according to some Russian pundits. Source: RIA Novosti

If, on the regional level, theology has been drifting further away from the philosophy department, then the creation of a specialized faculty at the federal level has caused a great amount of discussion. What is the reasoning behind such a move? What kind of jobs can theology students expect to find after graduation? Will there be demand for these courses? And will the focus on the Eastern Orthodoxy persist?

In 2000, Omsk State University became the first Russian university to open a department of Theology. Other Russian cities soon followed suit, with approximately 25 departments, faculties and divisions of theology now present in the Russian Federation.

“I'm proud that it was our university that began opening faculties of theology in Russia,” said Vladimir Strunin, rector of the Dostoevsky Omsk State University. “Such departments are in high demand, and competition for admittance is on a par with other humanitarian departments. This means that our experiment, conceived during a period of uncertainty in Russia, was completely justified.”

In the near future, the number of theology departments may increase dramatically. The trend of instituting 'the study of God' is gaining serious momentum. St. Petersburg State University is considering opening a theology department, and a similar faculty will begin operating in the Chechen region beginning next year. Federal universities are getting in on the act as well, with Southern Federal University set to open its theological department next year.

“Life itself gave us the idea,” said Andrei Mikushkin, a director of the diocese of Rostov. “Southern Federal University cannot compete for a place among the top universities in Europe without such a faculty. Every respectable university has a department of theology,” Mikushkin said.

The demand for specialists in this area arose largely thanks to a new course of study in Russian elementary schools. The foundations of religious cultures and secular ethics will be a compulsory subject for students in grades 4-5. Consequently, it is up to the new department to resolve the need for more qualified instructors.

“We sorely miss having specialists on the subjects of theology, religion and divinity. The lack of instructors is undeniable. We're currently retraining a number of math teachers, for example. But retraining on its own isn't enough; we need qualified specialists for this,” said Mikushkin.

The Rostov region alone is in need of 3,500 teachers of Russian Orthodox culture, which suggests that graduates will be able to find work without a problem. It is important to note, however, that the federal theological department will only be accepting 50 students.

“We intend to select 25 students for the full-time program, and 25 for the part-time program,” said the department's future director, Yevgeny Nesmeyanov. “The Faculty of Theology will be part of the Pedagogical Institute, which has already existed for six years, five of which have produced specialists in theology. We currently have 64 students in the department. But if it proves popular - and if there is serious completion among graduates - then the faculty may grow significantly,” Nesmeyanov said.

Southern Federal University will provide a concentration in Russian Orthodox studies, although other religions will be studied as well. “The main focus in the department will be on Orthodox studies, but students will study all religions - it is secular education, after all.  The main aim of the new department is to provide an education for  those who will deal with religion in museums and administrative and  educational institutions,” said Nesmeyanov.

“We can't ignore the fact that we live in a multinational country,” said Alina Levitskaya, rector of North Caucasus State Technical University. “The preparation of specialists in Islamic studies is one of the main objectives of our university. Right now, we're in the process of hiring instructors, and we'll be announcing the opening of the theological department very soon,” Levitskaya said.

But not everyone is thrilled about the split of the theological department from the departments of philosophy and religion. The country's leading educational establishment, Moscow State University, has refused to create such a department on its campus.

The renowned philosopher, Boris Gubman does not approve of federal intervention in this area.

“The department of theology needs to be financed by the church community, not governmental organizations,” said Dr. Gubman, director of the Faculty of Philosophy and Cultural Theory at Tver State University. “Otherwise, there will be a direct conflict with the constitution of the Russian Federation (the church being held separate from the state). In the U.S., churches have long supported theological departments, and in Germany there's federal support for confessional education. The government divides taxes between different faculties specializing in different subjects. It's imperative to implement a financial and federal mechanism that would thoughtfully uphold the constitution and demonstrate religious tolerance for people of different faiths. The establishment of a faculty of theology at Southern Federal University may have a positive effect on the region, but who will provide instruction in this faculty? I doubt it will be possible to find secular instructors with the necessary amount of knowledge in such a short period of time,” Gubman said.