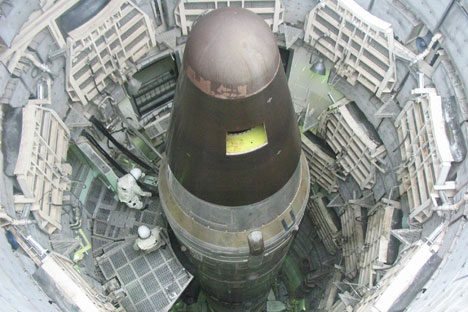 The new silo-based ICBM will replace the R-36M2 ‘Voyevoda’ missile (known to NATO as the SS-18 ‘Satan’). Source: Press Photo

By 2018, Russia will design and build a new heavy intercontinental ballistic missile, as part of its asymmetric response to the deployment of the US anti-missile defence system, head of Russia’s Strategic Missile Forces Colonel General Sergey Karakayev said. The new silo-based ICBM will replace the R-36M2 ‘Voyevoda’ missile (known to NATO as the SS-18 ‘Satan’).

Plans of producing the new heavy missile which was to replace SS-18 Satan missile were revealed as early as 2010. Now the implementation of this plan is linked with political factors, the first of which is the progress of the US-Russia talks on anti-ballistic missiles (ABM). That is the reason experts and mass media began to see the new missile as Russia’s response on the US deployment of its ABM.

So far it has been decided that lighter missiles, first of all the RS-24 Yars missiles will form the core of Russia’s Strategic Missile Forces, Igor Korotchenko, chief editor of the National Defence Journal says.

“I think solid-fuelled RS 24 Yars both silo deployed and of mobile basing will form the mainstream line for the development of Russia’s strategic nuclear forces and namely their ground component. They must be the core of the strategic forces for the next 50-60 years. As for the new liquid fuelled ballistic missile, its fate will depend on the results of the talks between Russia and the US on ABM and on the economic situation. Will Russia be able to finance liquid and solid fuelled missiles at the same time?”

Alongside economic factors, it is necessary to take into account whether it is rational or not to produce such a missile. Some experts believe that silo-based intercontinental missiles both light and heavy ones have become too vulnerable for high-accuracy weapons.

We hear from Vladimir Dvorkin, an expert at the Institute of the World Economy and International Relations: “I think it is not reasonable to develop a new site-fixed and liquid-fuelled missile. In the armament system, it can be used only for the initial strike or, as a last resort, as a counter attack. I see this scenario as absurd with regard to the main nuclear powers which are Russia, the US, China, France and the UK. This missile is not suitable for a retaliatory strike because it has a very low viability. It is vulnerable to all missile defence weapons.”

In this situation, experts conclude that the deployment of a new group of silo based missiles is grounded only in one case: if the US begins to speed up the deployment of its ABM system which can threaten Russia’s nuclear potential. But this scenario is possible only if the parties return to the state of the Cold War, which is very unlikely today.