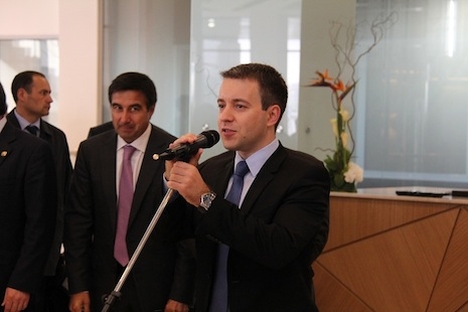 Nikolai Nikiforov speaking at the opening of Kazan IT-Park’s branch in Naberezhnye Chelny, with Mayor Vasil Shaykhraziev in the background. Source: The Kazan Herald

On 25 August, Kazan IT-Park celebrated the opening of a second building in Naberezhnye Chelny, in a ceremony attended by Russian Minister of Communications and Press Nikolai Nikiforov, President of Tatarstan Rustam Minnikhanov, as well as leading government and private-sector representatives of the regional IT and business community.

Housed in a building formerly owned by the truck manufacturer Kamaz, the opening of a satellite site of Kazan IT-Park in Naberezhnye Chelny is a move seeking to diversify the city’s economy, which is essentially reliant on Kamaz’s operations. The opening of the new facility, whose preparation cost 1.38 billion rubles ($43 million), was executed within the context of a long-term Russia-wide program to modernize the country’s economy by creating 25 million jobs in high-tech sectors.

The opening of the Kazan IT-Park base in Naberezhnye Chelny also comes as Tatarstan is finalizing a decade-long, $13 billion project to build Innopolis, a city of 155,000 people to the west of Kazan that will be designed to foster the creation of 60,000 IT-sector jobs.

The new building in Naberezhye Chelny is being promoted as a branch or filial of Kazan IT-Park, which was opened a new building in downtown Kazan in October 2009 under a federal program designed to provide working spaces for high-tech sector jobs. Naberezhnye Chelny’s branch of Kazan IT-Park was designed by Evolution, the same company which designed the original Kazan IT-Park, and bears many similar features, including a business incubator, a server, negotiation rooms, and a press center. Both buildings have a Cava café, post office, and Ak Bars Bank branch in their lobbies.

The Kazan and Naberezhnye Chelny buildings are both run by a single management company, entitled “High Technology Technopark IT-Park,” a State Autonomous Establishment owned by the Tatarstan Ministry of Information and Communication and directed by Dinar Nasyrov.

For example, Partizan-Info – a start-up which sells servers that sends out automatic invitations to download mobile applications within a 300 meter radius – is run by Igor Lekontsev, who is originally from Perm. Lekontsev plans to move to Naberezhnye Chelny to continue developing his business there. He recently received a patent for the technology in his technology and plans on applying for a 5 million ruble grant within the Tatarstan Investment Development Agency’s Innovation and Technology program, designed to help small and medium businesses grow within the republic.

At the press conference immediately following the opening, Nikiforov explained that the facility played an important role in the development of small and medium business.

To help integrate it into the life of Naberezhnye Chelny and develop what is being called an “IT-ecosystem,” the center will house a branch of the Kazan Federal University’s Information Technology and Information Systems School (IT IS). Additionally, Kazan IT-Park will develop tracking programs in three schools in Naberezhnye Chelny – Gymnasium No. 26, Gymnasium No. 36, and Lyceum No. 78 – to help identify and cultivate IT talent as early as grades 6 and 7.

These students, Mayor of Naberezhnye Chelny Vasil Shaykhraziev enthusiastically explained during the press conference, will be fully integrated into the life of the IT-Park. Ideally, they will go on to study at ITIS’s branch in the city, and go on to open their own business in the Business Incubator in Naberezhnye Chelny.

“At the age of 21, 22, when they get their diploma, these young ‘IT-Park’ guys will open their own business and calmly continue to develop, perhaps even fall in love, start a family, and remain proud citizens of Tatarstan,” Shaykhraziev declared.

Speaking at the opening ceremony, Minnikhanov explained that the new building in Naberezhnye Chelny was an important step as Tatarstan seeks to build its role as a leading IT hub in Russia.

“We are creating an IT cluster,” Minnikhanov explained. “These IT-Parks will prepare people for the leading innovation center Innopolis, which must – in fact, will – appear in the near future on the banks of the Volga.”

Two days earlier, the authorities had registered Innopolis, a joint-stock company which will oversee the development of this new city. The director of this management company is Evgeny Danilov, who in May of this year became the director of the Tatarstan branch of Rostelekom, a position vacated by Roman Shaykhutdinov when he was appointed Tatarstan Minister of Information and Communication.

In response to a question during the press conference, Minnikhanov confirmed that he will be visiting Carnegie Mellon University to continue discussions about a possible educational partnership in developing a new IT university planned to be built in Innopolis.

The idea to develop this new IT university in collaboration with Carnegie Mellon University or its subsidiary iCarnegie has been tentatively given the go ahead by the federal government, Minnikhanov explained, expressing hope that it would come to fruition.

“It is not an easy path,” Minnikhanov noted. “Our educational system and foreign educational systems are different.” Even so, he stated that such an international partnership was necessary and that he was positive about its prospects.

First published in The Kazan Herald.