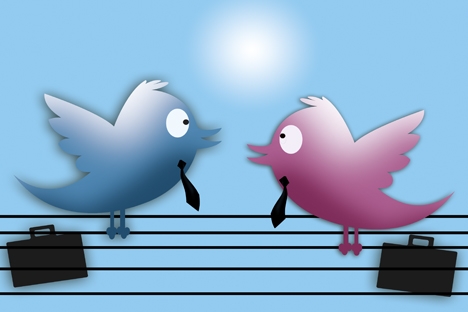 In recent years it often looks like diplomacy has moved from the “smoke filled rooms” of international gatherings to the touchpad screens – so much has been said about the new dimension of public diplomacy labelled e-diplomacy, twiplomacy, etc.

While, talking seriously, the good old confidential contacts have not been (and will not be) abandoned by anyone, the conquest of the digital space by diplomats is really a hot trend today. World media cover the effort of the US Department of State (the website of which sports the motto Diplomacy in action) and the UK Foreign Office. Too little has been said, however, about Russia’s foreign digital engagement, even though we have made some significant advances and have a huge potential for growth (even here in London – take a look at our Embassy’s Diplomacy online website www.rusemb.org.uk).

In fact, last year Russia overtook Germany as Europe’s largest internet market with over 54 million monthly users and rapidly growing. Some 7 percent of all websites in the world are in Russian; the contribution of internet economy to Russia’s GDP will rise to 3.7 percent in 2015 (not least because broadband connection in Moscow is way faster than in many European capitals). Russia is one of the very few countries where the local search engine (Yandex) and social network (VK) beat foreign rivals in free unhindered competition. Russia does not resort to filtering or blocking internet content (except for child pornography and a limited list of hate speech websites), and the Government is keen on making the web a universal way of receiving and controlling public services, thus reducing corruption.

So, we have sufficient expertise to be well represented in the cyberspace. The question is how best to use it to get our voice heard? It is not a secret that the international headlines are mostly defined by the English-language media. If they silence alternative voices – like they did and are doing on Libya, Syria and other international issues – those issues are to get little or no attention of the public opinion. But things have changed since the times when colonial wars were sparked by letters in ThePall Mall Gazette about white women abducted by wicked natives. With the advent of internet dissenting voices got a chance to be heard. I learnt about the power of this new guerrilla journalism from my meetings with British bloggers. If you are intelligent, original and provocative, your message has now a chance to get across (this is also the approach of the Russian TV station RT which quite often gives voice to those ignored by the mainstream media and has now become the third most popular TV news outlet in the UK after BBC and Sky).

For a diplomat, forays into the digital world, though, come with a challenge. People of my profession are used to self-restraint and often believe that once we have a position on something, published on the official website, all those who need to know it, know it. Although there are always people who only know what they want to know. We were taught to be always intelligent, sometimes original and never provocative – now we have to learn how to combine all these. In a country like Britain, where 2/3 of adults are on Facebook and ¼ on Twitter, one cannot ignore these media and should learn the logic of communicating through them. Successful digital communication is not about just issuing press releases – it is as much about conversation and interactive engagement. Even negative comments have the power to stir up discussion and help to get the original message across. And while many still do not believe that 140 symbols on Twitter are enough to convey an idea, I am firmly convinced that they are enough to raise awareness and encourage those who read them to reflect and make their own conclusions. My first Twitter conference in May confirmed that.

Another challenge for e-diplomacy is the internet “culture of anonymity” – anyone can adopt any persona, address or even attack anyone (though Britain has seen a row of “Twitter troll trials” recently). We shouldn’t ignore such interlocutors – they live according to a specific set of rules. But for those who exercise public diplomacy this is not a good choice. Our message should be clear. That is why I (@Amb_Yakovenko) am proud to be one of just 35 thousand officially verified Twitter users worldwide.

Russia joined the club of “twiplomacy great powers” relatively recently, and in the London ranking of followers our Embassy is third after US and Israel who have invested heavily in this instrument of foreign policy over longer period of time. Still, my country has a message to convey and expertise to accomplish that. During this year’s Conference of Ambassadors in Moscow President Putin called upon us to make use of new instruments of diplomacy to argue in a more effective way for our views and positions on world affairs. We believe that the more people learn about our policies and about our country, the better they understand us. And better knowing each other works for peace and stability.

The Russian Embassy in London is present in the following social networks: