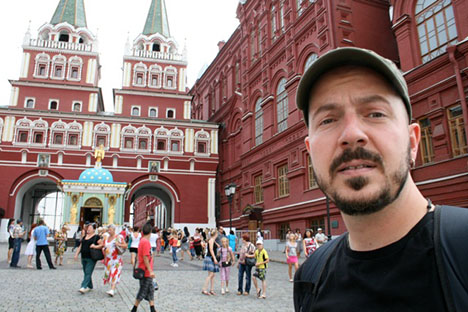 Marcel Krueger: I really like to explore a city on foot when I’m there for the first time, but that was almost impossible in Moscow because of its immense size. Immense measures seem to be the leitmotiv in the Russian capital. Source: Press Photo

A few weeks ago Marcel Krueger spoke to RBTH about his project of visiting Russia and Poland following the same route taken by his grandmother 67 years ago. We collected some of his impressions at the end of his journey.

Marcel Krueger is back at home, in Berlin. He spent the past few weeks travelling across Poland and Russia, tracing the route followed by his grandmother Cäcilie 67 years earlier. Cäcilie was among the Germans located in East Prussia rounded up by the Red Army during their invasion of Central Europe at the time of World War II and was subsequently forced to move to the Urals. After exploring Poland, Marcel set out to discover the vast lands of Russia, a country he had never visited before, willing to put to test Russian stereotypes, mingle with the locals and discover more about its history and culture. Throughout his journey he documented his research on the history that lead to the relocation of his grandmother in the blog InTheDarkNight, the effects that the arrival of the Red Army in central Europe had on the German population and the social transformation witnessed by Russia and Poland throughout their history.

After discussinghisexpectationsandhopesforhisadventure, Ilaria Parogni of RBTH met with him to draw some conclusions on his journey and find out what he really thought of Russia and its people.

Russia Beyond the Headlines: You have recently returned to Berlin following your trip across Poland and Russia. How does it feel to be back home?

M.K.: Like with most journeys, and for most people, it is like I was gone only for a few days, and the daily routine has taken over again quite quickly. However, I have to keep reminding myself not to say ‘доброе утро’ [good morning] anymore when entering the corner-shop near my apartment.

RBTH: When I last spoke to you, you still had to reach Russia. What were your impressions of the country, when you finally set foot in it? Did it meet your expectations?

M.K.: Yes and no. Whilst preparing for my trip I read a lot about Stalinism and the period between 1945 and 1960, and I realize now how that grimy image subconsciously affected me prior to my arrival. In the end I was positively impressed by the country I have come to know. Russia has proved to be a very welcoming country, where I had no problems getting around without being fluent in Russian. When they realized I was a tourist, everyone was extremely helpful, even the militia! I was also surprised by the level of globalization in Russia - had I wanted to, I could have shopped in Ikea, Obi and Starbucks even in the Sverdlovsk Oblast, in the middle of the country.

RBTH: What places did you visit and which one did you like the most?

M.K.: I went to Moscow, Yekaterinburg and a few smaller places in the Sverdlovsk Oblast. Moscow was a bit too much for my taste. I really like to explore a city on foot when I’m there for the first time, but that was almost impossible in Moscow because of its immense size. Immense measures seem to be the leitmotiv in the Russian capital. I went to restaurants with a capacity of 400 people, where I was the sole customer. I had to learn the hard way that whenever a Muscovite told me ‘It’s just up the road’ this most likely meant ‘that’s a 20-minute walk along a 10-lane-road’. Yekaterinburg, on the other hand, is a very nice town and by far my favorite location in Russia. It’s very accessible to the average strolling tourist, and the compactness of the city center really allows you to retrace its history from frontier town to industrial and administrative center.

RBTH: What did you think of the Russians you come across during your journey - were the stereotypes you wanted to put to test defeated?

M.K.: Mostly. Everyone told me in advance that I would have some difficulties not speaking Russian - but I had no problems getting around with English alone. Whenever people realized I was struggling with Russian (or simply that I was a foreigner), they switched to English or summoned somebody who could speak English to help out. In addition, I found out that the problems and challenges young urban Russians experience are the same as in London and Berlin - finding a job, paying rent, commuting etc. This level of understanding allowed me to have very profound conversations with the young Russians I met. One stereotype was confirmed, however: there are half-naked men on Russians trains who invite you to drink vodka with them at 10 in the morning.

RBTH: What did you discover about your grandmother and the history at the time of her relocation to the Urals?

M.K.: There weren’t as many traces as in Poland, but I learned a lot about the industrial history of the Urals and how much of this development was made possible with the help of the prisoners of the gulag and the German prisoners of war. I was also able to visit two of the places where my grandmother worked between 1945 and 1949: a small village named Kosulino (Косулино), where she worked in a kolkhoz, and the industrial town of Revda (Ревда́), where she worked in a factory. The camps in the region have been completely destroyed, but physically going to these places did make me feel closer to her, especially after arriving in Yekaterinburg by train and having covered the same distance as she did in 1945.

RBTH: During your journey you wrote a blog documenting your research and adventures. Will you continue blogging now that you are back home?

M.K.: I am still blogging and is going quite well. I am not posting as frequently as I did while on the road, but there are a few things still in the pipeline. I am going to realize an interactive map to access all posts in chronological and location-based order and I still have to publish a few interviews conducted during my journey. I’m also planning to document my ongoing research activity and writing endeavors on the blog, as I’m planning to publish a book about my grandmother.

RBTH: What’s the best memory that you have taken home of your journey across Russia?

M.K.: I love travelingbytrain in Russia - the monotonous clatter and the knowledge that you still have 15 hours of travel ahead of you made it almost a meditative experience. And even chatting with half-sozzled Russian men at 10 in the morning was extremely entertaining.

Another highlight was the evening I spent in discussion with the members of the EnglishClub in Yekaterinburg, a weekly discussion group in the basement of a local restaurant. After talking about my trip we had a lively discussion about family history in Russia. I was surprised to learn how many of them were first or second-generation Yekaterinburgers, and how their parents moved or were forced to move to the Urals from all over Russia.

RBTH: Do you have any plans of going back to Russia at some point in the future?

M.K.: It may actually be necessary sooner rather than later due to my book research. Who knows, I might need to return to either Poland or Russia for more research, and more pelmeni, quite soon. I wouldn’t mind going back to Yekaterinburg and explore the Urals a little more. Even though it took me four days to get there, it’s only five hours on the plane from Berlin!