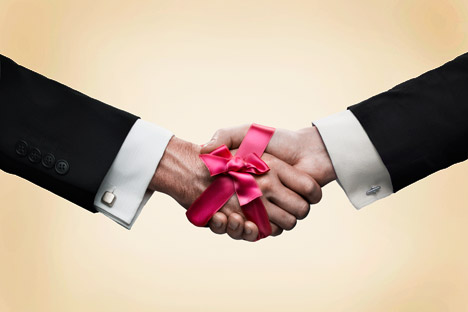 Russia is contemplating penal provisions for officials who receive non-cash bribes. The General Prosecutor's Office is already drafting amendments to Russia's Criminal Code to this effect.

The main idea is to count not only cash payments but also non-cash benefits extended as bribery. "In accordance with the recommendations of the Group of States against Corruption (GRECO), Russia's General Prosecutor has ordered the preparation of amendments to the Criminal Code. The amendments in question are to define not only cash and other benefits with monetary value but also any non-cash benefits as bribes, and institute criminal responsibility for so-called influence peddling," said Deputy Prosecutor General Alexander Buksman.

"In all likelihood, compensations in any form, including incentives, promotions, services, assistance in return for illegal actions, as well as intended inaction, will now be counted as non-cash bribes," said Alexander Selyutin, managing partner and lawyer at the firm Selyutin and Partners, commenting on the bill.

"That said, it would actually be good if the law applied to everyone, regardless of their positions," Selyutin said, adding that in the United States, even the president is not immune to criminal liability for corruption. Meanwhile, Russian lawyers doubt that the law will truly help fight corruption. According to lawyer Vadim Kobzev, the broader concept of bribery proposed by the Prosecutor General's Office will hardly have any practical effect. "As we have seen from experience, the overwhelming majority of criminal cases on counts of corruption deal with the receipt of cash or cash equivalents in the form of shares and buildings, which can be easily and precisely evaluated," Kobzev said.  This latest idea is irrelevant to the current situation, in his view.

"I have never heard about any cases where this would be a problem for investigation or court," said Kobzev. It is even technically possible to determine the value of the services that the General Prosecutor's Office is now targeting — granting university degrees, publications in the press, or sexual services. "The law we have now has everything in it to enhance the fight against corruption, and these war cries and initiatives do no good. There is nothing to prevent dealing with this problem today, we just need to  learn to solve cases," lawyer Vadim Klyuvgant said.

Lawyer Vladimir Zherebenkov, on the other hand, praised the authors of the bill for a measure that he feels was taken in advance. "The bill is necessary in light of ongoing development trends in modern society. Russia's current Criminal Code makes it difficult to bring criminal proceedings against corrupt officials, since it requires an assessment of the bribe; the amendments address this problem," he said.

According to Zherebenkov, the article on non-cash services should be introduced to Russia's Criminal Code "simply to make people aware of possible criminal liability for providing and using certain services."

Under the current Criminal Code of the Russian Federation, the offer or acceptance of a bribe is punishable by fines of up to a 100 times the size of the bribe, imprisonment for up to 15 years, as well as
disqualification from holding certain positions for an extended period of time.