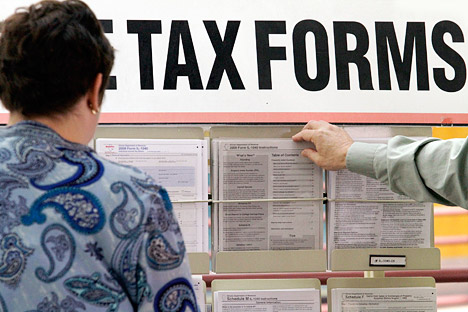 In two weeks, final proposals concerning compliance with the U.S. anti-money laundering law are to be submitted.

FATCA requires foreign banks holding accounts of U.S. taxpayers to enter  into special agreements with the U.S. Internal Revenue Service. The  agreements, in turn, stipulate that the banks are required to monitor  such accounts and report on any operations to the IRS. Banks in the U.S. have been disclosing information about their clients to the IRS for a long time, and the practice of reporting on American taxpayers is now to be extended globally. Should banks fail to comply, the IRS promises to levy a 30 percent tax on operations with financial assets of U.S. account holders.

To reduce the risks involved in “direct” agreements between non-U.S. financial institutions and the IRS, some countries (France, Great Britain, Germany, Italy, Spain, the Netherlands, Switzerland and Japan) have declared their intention to enter into intergovernmental agreements with the U.S. regarding their participation in FATCA. In return, financial institutions of these countries will be exempt from the 30 percent tax and subject to a simplified mechanism for reporting on residents paying taxes to the United States. This mechanism has not yet been implemented in Russia.

Fearing that Russian banks might sustain financial or goodwill damage, the National Payment Council addressed a letter to Russia's Prime Minister Dmitry Medvedev in June 2012 and requested that he begin developing the FATCA compliance mechanism for Russia. At the meeting initiated by Nabiullina, which came in response to the letter, the council came up with five options for Russia's participation in FATCA.

The first option envisages an intergovernmental agreement between Russia and the United States, under which Russian banks will enter into separate agreements with the IRS and disclose information on U.S. taxpayers directly but in a manner prescribed by national laws. This model has been adopted in Switzerland and Japan. According to National Payment Council President Andrei Yemelin, in view of the tight timeframe, this is the best option, though it is fraught with the risk of violating bank privacy laws.

The second possible model also rests on an intergovernmental agreement that would, unlike the previous option, lay the groundwork for centralized disclosure (this model has been implemented in France, Great Britain, Germany, Italy, Spain and the Netherlands). If the model is adopted, banks will be required to submit all relevant information about U.S. taxpayers to the national regulator, which will then pass it on to the IRS. In return, the United States pledges to disclose to its partner nations information about accounts opened with U.S. financial organizations by their relevant taxpaying residents.

The third option, strictly in line with U.S. law, also suggests direct agreements between Russian banks and the IRS, but is even harder on the banks. Aside from reporting to the U.S. tax authorities, the banks would be under obligation to deduct a 30-percent tax from or even close the accounts of those refusing to cooperate with the IRS. Yemelin noted that such a scenario, alongside the danger of breaching bank privacy laws, involves potentially problematic direct debit withdrawals for the benefit of a foreign government.

According to Yemelin, to implement any of the three options, additional national laws must be adopted. The procedure must also be mapped out by October 1, 2012, to followed by an intergovernmental agreement with the U.S. that must be entered into by January 1, 2013. In addition, banks need to be advised promptly of the particular compliance mechanism selected, to prevent them from entering into individual agreements with the IRS.

The fourth option suggests that Russia's accession to FATCA be postponed. Yemelin, however, considers the chances of this being adopted slim. The fifth scenario implies absolute withdrawal from FATCA. "This will cause banks to suffer direct losses in the form of taxes withheld by the IRS and reputational risks in the global  financial arena", Yemelin said.

Any Russian federal law regulating FATCA compliance must be based on an intergovernmental agreement with the United States that is in line with the double tax treaty, Yemelin explained. Meanwhile, the government has not yet selected an exact scenario. Although the process of developing a FATCA participation mechanism has been launched, it is proceeding slowly.

"The most favorable and comfortable scenario for Russia would be to combine options", said Konstantin Trapaidze, Chairman of the Bar Association Vash Yuridichesky Poverenny. "First, we have to go with the model used by Switzerland and Japan ‒ individual agreements ‒ and work by this scheme until an intergovernmental agreement between Russia and the United States is reached on centralized transfer of information. Otherwise, the given initiative, which is so far feeble and unauthorized, will take on an unbalanced character, damaging Russian banks most of all," Trapaidze said. Meanwhile, the banks will have to bear the brunt of the accession anyway, head of financial monitoring at SMP Bank Inga Tumasyeva said: "Either way, the banks will incur material costs involved in implementing the changes. They have no choice, though, since they will otherwise become outcasts: compliance with FATCA has been virtually accepted by the global community."