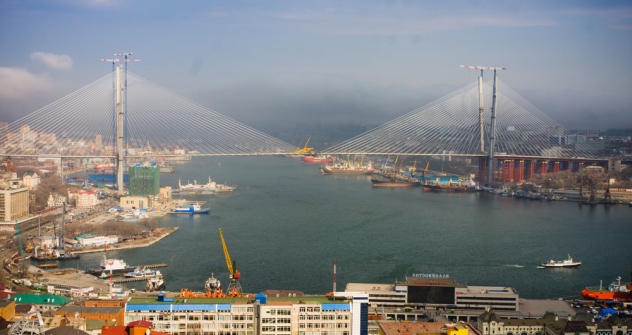 The first APEC CEO summit to ever take place in Vladivostok suggested that Russia’s planned $100 billion trade expansion eastward will be based on energy and agriculture.

“A few months ago people were saying the summit would be a disaster,” said David Gray, Managing Director of PriceWaterhouseCoopers, on the last day of the event. “They said we’d be living in tents; the bridge wouldn’t be ready and we’d be taking the ferry to Russky Island. Now that’s all been quickly forgotten.”

A few shabby roads and the firing of one local transportation official aside, Vladivostok’s reconstruction for the 24th APEC CEO summit went off on time and without a hitch. Equally important, the summit was a platform for scintillating discussion on the risks and opportunities of free trade, resulting in a number of important investment deals for Russia’s Far East.

New investment projects included the first ever launch of a Mazda assembly line outside of Japan (attended personally by President Putin immediately before the summit), a Hyundai engine plant and a deal with Japan’s Noda to build an liquefied natural gas (LNG) plant outside Vladivostok. A similar plant built in conjunction with American and Japanese firms opened on nearby Sakhalin Island in 2009; the project transformed Sakhalin from a debtor into one of Russia’s few regional donors to the federal budget.

“Costs aside, the development they did here in Vladivostok will allow Moscow-based expats like me to convince our bosses in London, New York or wherever about the benefits of long-term investment in Russia’s regions. Now they’ve seen it with their own eyes,” said Gray. This means the positive effects of Vladivostok’s $20 billion upgrade may go largely unrecorded, while other regions enjoy an investment boom.

The key purpose of the summit, however, was summed up by First Deputy Prime Minister Igor Shuvalov at one of the opening sessions: “All of the infrastructure is in place around Vladivostok now – a new airport, roads, railroads, educational and medical facilities. Within five years, our foreign trade should balance in favor of Asia and guarantee high growth rates in the Far East. Within 10 years, we want our trade volume with APEC states to be greater than with the EU.”

While the EU currently accounts for around half of Russia’s foreign trade at approximately $320 billion, APEC trade stands at less than half this figure (though it has increased to 23 percent from 15 percent of the total since 2006, according to customs data compiled by Bloomberg). Russia’s leaders have been careful to emphasize that this re-balancing act would not come at the expense of relations with the EU, and a raft of free trade incentives with Asian countries have been announced in recent months, in order to facilitate the rapid growth needed.

“For us, joining the WTO was a stepping stone to becoming an OECD member,” said Shuvalov. “We’re also engaged in several important integration projects – the Eurasian Economic Space with Belarus and Kazakhstan, free trade agreements with New Zealand and Vietnam. Russia takes on more risks by not integrating with Asia than by doing so.”

In a recent report, PwC predicted that Russia’s exports to APEC countries would more than double to $206 billion by 2021. One of the most promising sources for this increase is also its greatest impediment. The Trans-siberian railway is arguably the most important component of Putin’s desire to turn Russia into a major transportation corridor between Europe and Asia (along with the Northern Sea Route). Already operating at full capacity, it also requires billions of dollars of investment for upgrading the single rail line and building logistics facilities along the way.

Russian sea ports also have a large role to play in the country’s eastward expansion. "The amount of trade between Europe and Asia exceeds $1 trillion, and every percent of the cargo that is transported via Russian territory will bring our economy no less than $1 billion," Ziyavudin Magomedov, chairman of the board of Summa Group, said at a panel session. Currently less than 1 percent of the cargo is transported via Russia. A recently announced federal plan calls for increasing the traffic cargo at all of Russia’s ports from the current rate of 540 million tons annually to 900 million by 2020. About half of this increase is to come from ports on the Pacific Ocean.

Yet, bureaucracy is another major impediment to Putin’s transportation goals. Goods passing through Russian ports can spend nearly 2 weeks in customs, while the corresponding figure for Singapore is a single day. “A one day delay in shipping leads to a one percent price depreciation of exports,” said Tony Nowell, Chariman of New Zealand Forest Research Ltd. A competing railway, which is to link China’s Eastern coast to the border with Kazakhstan, also casts doubt on Russia’s ambitious transport modernization plans.

An industrial holding company with close links to the government, Magomedov’s Summa looks set to emerge as a key player in the development of the Far East, having already invested in a raft of infrastructure projects in the region. The group is negotiating a deal to buy a 55.8 percent stake in the Far East Shipping Company, and it signed a memorandum of understanding during the APEC CEO summit with Russia's state development bank, Vnesheconombank.

Currently, the eight largest APEC countries by population import over 100 million tons of grain annually (a more than $50 billion market at current prices). This is more than Russia currently produces. “APEC countries account for about 37-38 percent of all imports worldwide. Our percentage of that is currently zero,” explained Vyacheslav Nikonov, a member of the Russian Duma’s Budget and Taxation Committee.

Currently Russia has neither the roads, railways nor the ports in place to direct its grain exports toward Asia (the grain now leaves ports on Russia’s European coastlines, destined for markets in the Middle East and elsewhere). But Putin’s promise to increase grain production from the current 80-plus million tons a year to around 120 million tons has been enough to convince Magomedov of the potential for exporting grain to Asia.

“Agriculture is developing in the Far East. Investment is flowing in, and foreigners already work on our farms. You may have heard of North Korean labor in Siberia and the Far East,” said Nikonov.

PwC predicts that Asia will become the world’s largest natural gas market by 2015, and the $7 billion deal with Noda suggests that Russia is planning to take full advantage of this trend. It is expected that most of the liquefied gas coming from the plant will be exported to Japan, as the island country ups imports and shuts down nuclear reactors in the wake of the Fukushima disaster. Noda’s LNG plant in Vladivostok is expected to reach full output by 2017.

Recently completed oil pipelines to China, as well as plans for expanding their capacity, suggest natural resources will play a critical role in expanding Russia’s exports to APEC as it seeks to diversify away from European consumers. However, haggling over the price of oil with Chinese officials has thus far been an obstacle.

Putin and recently-appointed Minister of Far Eastern Development Victor Ishaev have placed much faith in “re-industrializing” all of Russia and, in particular, the Far East. One of the region’s few exportable manufactured goods remains the Sukhoi Superjet plane, which is assembled at a factory in Komsomolsk-on-Amur. A crash during a test flight in Indonesia killed all 45 people on board and placed a shadow of doubt on Russia’s long-term plans to take on 10 percent of the world’s civil aviation market. Still, Sukhoi has over 200 domestic and international contractual commitments on the jet plane over the next several years.

Another step towards creating a full-scale automobile cluster in the region was taken during the summit, when Vladimir Putin attended the launch of a Mazda production line at the Sollers plant in Vladivostok. "Initially, $350 million will be invested in the Mazda joint venture," JSC Sollers General Director Vadim Shvetsov told reporters. The eventual capacity of the plant will be 100 thousand vehicles annually, with Sollers seeking to take advantage of the trust Japanese models already enjoy in Russia’s Far East. Over the last 20 years, a significant portion of the region’s economy has originated from the re-sale of secondhand Japanese cars. A recently opened Hyundai engine plant in Vladivostok is a sign that the localization of car production sought by Sollers is becoming a reality.

During my last trip to the Far East, officials and experts alike remained skeptical that the region could ever manufacture exportable goods cheaper or of better quality than neighboring countries. However, Sergei Kryukov of the Russian Small and Medium-sized Business Development Bank said: “All of the problems impeding competitive products from being manufactured in the Far East are solvable through proper policies.”

The big question remains to what extent Russia will be able to increase exports to Asia via higher value-added goods, versus a continued dependency on raw materials, including in the Far East. In either case, “Russia’s future rapid economic growth rests on two legs – Europe and Asia,” said Shuvalov. This year’s APEC summit was an acknowledgement of that fact.