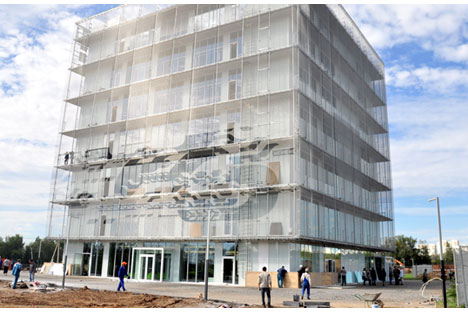 The first building for Russia’s own Silicon Valley (the Skolkovo Innograd) will be unveiled in late September, boasting an impressive number of innovative and environmentally friendly features.

The word “hypercube” is often associated with Andrzej Sekuła’s movie thriller of the same name. In the film, characters are trapped inside the cube-shaped construction of a mysterious genius. The cube building is actually made up of cube-shaped cells with unique properties: some rooms make time run faster; some distort space. Those inside the cube must escape the building as soon as possible, but not everyone is so lucky.

The architect of the Skolkovo Hypercube, Boris Bernaskoni, may have had Sekula’s film in mind when he designed the framework concept for his project. Bernaskoni’s Hypercube turned out to be much friendlier and more welcoming than the filmmaker’s, but the main ideas remain: deliberately ascetic interiors and exteriors, together with an enormous concentration of innovative solutions per square foot. The Hypercube is the flagship project of the Innograd at Skolkovo, so it had to overflow with high-tech solutions.

The Hypercube follows the “4E” principle for economical, ecological, ergonomic and energy efficient operation. A key feature of the building is its virtually autonomous communications system. The only external connection is a power line: solar cell batteries are installed on one side of the Hypercube, but they do not generate enough power for the entire building. There are no conventional radiators to be found on the premises, and heating is provided by heat pump units that use ground energy. Water supply is also unconventional: water is pumped from an artesian well, and waste water is treated for use watering landscaped areas.

Huge windows in the Hypercube enable occupants to use as much natural light as possible, with light conductors allowing sunrays into the centrally-located rooms. Normally, large windows are not used in Russian climates, for fear of losing precious heat. However, special heat convectors in the building create an air curtain that keeps the temperature in the building stable. Waste disposal here also offers another smart solution: waste is recycled in the building and transformed into household gas. To top things off, the front of the building is also functional: an additional stainless mesh front turns the building into a giant screen for displaying images, presentations and messages for Innograd residents.

"The Hypercube is the first building in Innograd. It stands all alone, so the natural environment called for solutions that ensured its autonomous operation. We aimed to keep a rigid aesthetic, both inside and outside. It is split into clear sections; we decided against fancy finishing. The interior of the Hypercube will be open soon — we developed a computer game in which the character gives a walk-through of all the floors of the building,” said Anton Yakovenko, the general director of Skolkovo’s administration. 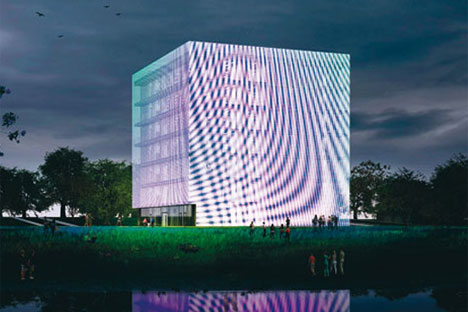 The Hypercube has seven floors. The first floor will feature the reception and cafés, and the second floor will house the offices of key Skolkovo partners – IBM, Cisco, etc. The third floor will be given over to companies working on innovation projects with Skolkovo support. A vast conference hall, with a capacity suitable for any type of event, will take up the fourth floor. The remaining three floors will most likely accommodate more offices for firms dealing with Skolkovo startups. In total, 16 companies have been authorized to establish offices in the building.

"The Hypercube will be of major importance to [resident companies] and their advertising, as it will essentially serve as one giant showroom for everyone working there. The Hypercube building and infrastructure are based on an innovative ‘open space’ concept, and it should become a model for developing the Skolkovo ecosystem. It is the Hypercube that will welcome top-level delegations and individual visitors, including heads of state and representatives of the international investment community. It is an important factor for the residents, since they will be able to meet potential investors,” said the development director of the Skolkovo technopark, Maxim Kiselev.

Although the building will not be officially unveiled until late September, some of its residents have already shared their impressions of the new workspace. Andrei Potapov, head of Sputniks LLC, commented that the technology potential for the Hypercube is extremely high; the area is open enough to offer a lot of freedom to rearrange space. “Plus, the first Innograd building has a lot of hidden treasures and surprises, which both residents and architects will find out about later,” said Potapov.