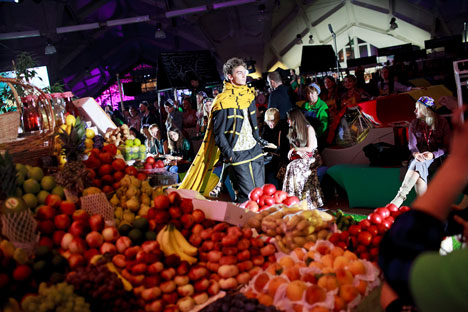 An improvised catwalk, replete with towering models dressed in maverick Italian designs, emerged through the heaping stalls of dried fruits and pyramids of vegetables that make Moscow’s Danilovsky Rynok among the most sumptuous and bountiful of the city’s markets.

Etro, the renowned Milan fashion house, used the space for an innovative and Fellini-fueled retrospective of its collections on September 12th. The family-owned company is celebrating its 10th anniversary in Russia.

The market stalls provided a dazzling background to the famously glamorous colors of the Etro collections. Prunes, apricots, tomatoes, carrots, eggplants and sweet peppers offered an enticing backdrop to the ochre, gold and purple hues of the collection, which included floor-sweeping evening gowns, stylized Asian tunic-and-breeches outfits for ladies, and shirts with outré prints for men. Natural bird-feathers were also part of the autumnal scene as ornaments on sculptured hats and head dresses. Pop-idol Philip Kirkorov, a Russian singer with Bulgarian and Armenian roots, appeared to loud cheers and applause wearing a full-length coat paired with white and chocolate cowhide boots from the previous fall-winter collection. It is worth noting that this collection is one of the most memorable from this label – titled “My Girlfriend Is A Cow,” it boldly flaunts a Tyrolean style while playing with traditional cowboy flare.

The models meandering through the marketplace were accompanied by live music played by the Moscow State Symphony Orchestra, conducted by Pavel Kogan. The show’s music was composed by Cesare Picco; the piano improviser and composer even performed himself at Danilovsky, perhaps his first time playing at a vegetable market.

There were opportunities to observe maestro Kogan masterfully conducting while teetering over a pile of watermelons – a scene that brought the format of a fashion-show into a deeper realm of theatricality worthy of Federico Fellini’s absurdist world view.

The finale was a grand parade of all the make-up artists and garment assistants on the catwalk – an idea rooted in the theatrical style of Fellini’s films such as “Armarcord” and “The Clowns.” The audience reception grew even warmer as many realized that the musical soundtrack for this farewell number featured the most frolicsome and well-loved numbers from Fellini’s films, composed by Nino Rota.

Girolamo Etro is a passionate admirer of all that is beautiful, especially beautiful fabrics – he founded his factory for fabric production, including the best silk, cashmere, linens and cotton, in 1968. Following one of his many trips to India, he began frequently used paisley prints – which ultimately become the distinctive symbol of the Etro brand. Etro today is a family company run by its founder and his four children: Veronica, the creative designer of the women’s collections; Keane, the creative designer behind both the men’s collection the company’s advertising campaigns; Jacapo, who has responsibility for Etro Casa homeware and fabrics; and Ippolito, the company’s executive director. Keane and Veronica Etro were at the helm of the retrospective collection show in Moscow.

What Russians adore in Italy’s Etro brand is the way it allows us to combine the incompatible in a single outfit. We love the way it consistently infuses its collections, year upon year, with the integrity of crèpe and the pathos of luxury. We delight in the way it encourages men to wear the finest-wool purple scarves and shirts with outrageously frivolous prints. Etro’s ironic and multicultural ethos has found a happy home in Russia over the past decade.

The fashion-festival at Danilovsky Market ended with a Russo-Italian cultural summit – all the attendees were issued with Central-Asian-style tiubeteika head-caps, and were greeted at the entrance of the market’s trading-hall by Mikhail Kusnirovich, the head of the Bosco di Cilegi company - along with the son of the Etro founder, and co-designer of the male fashion collection, Keane Etro. The pair were dishing-out a feast from a cauldron, all the while calling-out in the feigned accent of Uzbek market-traders “Who fancies another plateful of tasty Uzbek pilaf?”

It was left to Keane Etro to find words to sum-up the fashion show in a closing epigram - “To put joy into life, you have to add some color!” Every guest was given a huge ripe 22-lb watermelon as a souvenir of their visit to Danilovsky Market in honor of the vendors’ motto that each and every visitor ought to take something home.