Golden years ahead for Russia's e-commerce 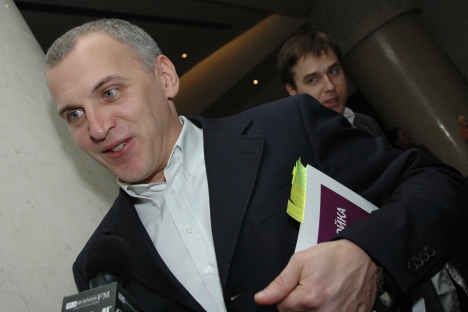 Oleg Ryazhenov-Siems has led the ambitious online strategy of Svyaznoy, the second largest Russian consumer electronics retailer, since 2009. Recognized as one of the best Russian e-commerce professionals, he has just been appointed as Svyaznoy’s Director of Strategic Marketing and Advertising.

While offering insights on how the retailer has successfully developed online activities all across the country, Ryazhenov-Siems speaks openly about the difficulties faced by many Russian e-commerce players, from the competition from ‘gray’ retailers to HR shortages and legal constraints.

What awaits investors in the Far East after APEC

East-West Digital News: Why did Svyaznoy launch an online business when its offline activities were thriving?

O.R.: Nowadays, developing a business through different channels is a necessity. Furthermore, in the case of Svyaznoy, our online and offline audiences are not the same, the overlap represents just from 20 percent to 40 percent, depending on the segment. So, adding the two audiences means significantly growing the business.

EWDN:How much do you make in online sales and how much of Svyaznoy’s business does it represent?

EWDN:How do your sales develop in the regions?

O.R: In 2011, Moscow and the Moscow region represented no more than 25 percent of the site’s sales – compared to an industry average of approximately 45 percent – even though sales in the capital continued growing in absolute figures.

Svyaznoy was the pioneer in this exciting regional business. We began rolling it out about four years ago; we soon had 7 regional warehouses across the country. This gave unbelievable results. Naturally, our online sales continued growing in the capitals too, but in a less dramatic way.

Of course, this was made possible by Svyaznoy’s huge offline network. We use every retail outlet as a pick-up point. This is much more convenient than waiting hours and hours for an order to be delivered. Our customers can choose any outlet across the country as a pick-up point. Certainly there is likely to be one located near the customer’s home or workplace: we found that every Russian passes by two or three Svyaznoy outlets during the day.

When transactions are truly convenient for consumers, business grows easily. That’s what actually happened with this online-offline formula.

Pricing is important too. At some point, we began to monitor very closely price formation in every region. This also came to fruition: we became more competitive.

An outlet of Svyaznoy in Moscow. Source: ITAR-TASS

EWDN:What is the size of your market segment?

O.R.: This market is chaotic. Established players – Svyaznoy, Euroset, Ozon and Mvideo, and a few others – represent perhaps half of the market. The other half is made up of plethora of small players, which is difficult to control since many of them work informally and illegally. This business is particularly developed in the regions, where it covers up to 90% of the market. The market is developing so fast, including its gray part, that no one wastes time assessing it.

Several organizations, from Data Insight to RAEC to Goskomstat, try to assess the size of the market. But their methodologies, their classifications and their results may diverge significantly. For instance, Data Insight has estimated the portable electronics market at $1.1 billion in 2011. That figure may be wrong, but if there is no other estimate available, I have to trust it. According to the same research data, Svyaznoy is the market leader, with 11 percent market share.

O.R.: We face competition from both specialized and non-specialized online retailers. Our chief competitors are Ozon.ru, MVideo, Eldorado, Evroset, Pleer.ru, Wikimart, MTS, Beliy Veter, and Smartphoto. Ozon is closer than others to Svyaznoy by turnover in the segment of portable electronics.

Another strong competitor is the ‘gray’ market. It is strongly segmented, hard to pinpoint, and impossible to compete with. We frequently meet and discuss business issues with all of the big market players. We observe ‘gray’ retailers on Yandex Market. We see the issue and understand how it makes our business more expensive. We cannot match their low prices, however, so we accept it for what it is.

EWDN:In 2011, Svyaznoy took two decisive steps to strengthen and broaden its online retail activities: you launched Svyaznoy Travel and online-offline Enter.ru, with its variety of product categories from furniture to children’s goods to jewelry. What is the strategy behind these moves? Are you competing with Ozon for the title of “the Russian Amazon.com”?

O.R.: Each of these sites aims to be a leader in its market segment or category.

Svyaznoy Travel has the same audience as Svyaznoy.ru, and works on the same online/offline synergy. Svyaznoy outlets are to become a substitute to travel agencies; we want going there to buy an air or train ticket to become as natural as paying for a phone bill. Monthly sales reached millions of dollars in the first quarter, and they double each month.

Enter.ru is a distinct concept with a separate audience.

EWDN:What has been the impact of the 2011 law on personal data on your activities?

O.R.: Regarding the processing and protection of existing data, we have enough staff to apply the law as required. But the majority of our direct marketing actions had to be stopped after the law was enacted. Obviously, we lose a certain volume of sales due to this law, but we have to cope with that. I believe they will adapt the law.

O.R.: The e-commerce market is absolutely new. There are few professionals because there are few players, despite the fact that there are 20,000 or 30,000 Internet stores on the market. Perhaps just one hundred people on the market have a thorough understanding of e-commerce processes. That’s extremely few. Marketing is also a vast problem. There are practically no qualified specialists. The situation is better regarding logistics. Here all the schemes are standard, with few protocols developed specifically for the online channel.

As a result, good specialists fly from one company to another. They’re like stars on the market, so if they consider switching to another company, they find themselves wooed there with higher salary. This creates conditions that overheat the employment market. If you want a big salary, do e-commerce!

EWDN:How do you envision the Russian e-commerce market in the coming 5 years?

O.R.: It will grow explosively. There will be more and more players coming into the market, with many more customers purchasing. The regions, where the current average Internet penetration doesn’t even reach one third, will develop at high speed.

So far, Russian Internet users haven’t been very active online shoppers. A few years ago, our parents were scared to send SMS, but now they are used to it. As soon as our young generation realizes that purchasing via the Internet is convenient, profitable, and safe, they will begin make a massive switch to using it. We have golden years ahead.

Before his promotion to Director of Stratetic Marketing and Advertising, Ryazhenov-Siems had served Svyaznoy as Head of E-Commerce (2009-2012) and Head of Direct Sales (2012). He was previously Group Account Manager at the Russian division of Publicis, then CEO of the Russian edition of Time Out magazine. He graduated the State University of Voronezh, Russia, with a Linguistic diploma, then earned a Bachelor in Technique from Oxford Brooks University (Oxford, UK).

RUSSIAN E-COMMERCE REPORT 2012 – The total volume of Russian online retail reached 310 billion rubles, a little more than $10 billion, in 2011, up 25 percent from the previous year. EWDN has published an in-depth research on Russian e-commerce, which includes a review of the related venture deals over the last two years. To receive free insights or to order the full version, please contact us at editor@ewdn.com. For more information about Russia's e-commerce read the report prepared by East-West Digital News in conjunction with Russia Beyond the Headlines.