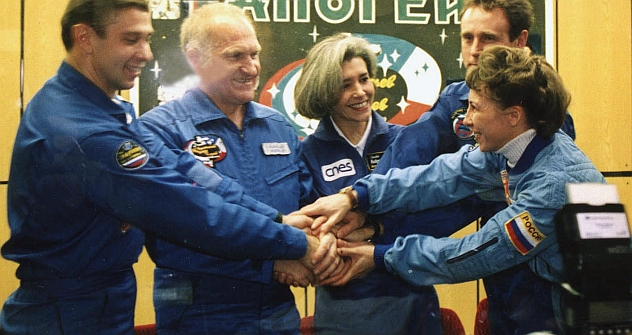 According to information from the Russian Space Agency, the final stage of the cosmonaut selection process that was announced earlier this year includes a number of female candidates (the exact figure, as in days of old, will remain a secret until officially made public).

The space industry remains a predominantly male profession. Whereas other “space nations” boast an increasing number of women who have left Earth’s atmosphere, Russia has yet to establish such a trend.

Nevertheless, the history of Russian female cosmonauts in space goes back half a century. In 1962, out of thousands of candidates, five were selected: engineer Irina Solovyova, mathematician and programmer Valentina Ponomareva, weaver Valentina Tereshkova, teacher Zhanna Yerkina, and secretary and stenographer Tatiana Kuznetsova.

Weightlessness training made use of the MiG-15-Spark. During one flight, the plane made three or four steep climbs, and tasks were assigned during each 40-second period of weightlessness: first, the pilot had to write her full name, and date and sign the piece of paper; next, she had to try to eat from a tube, and, finally, to pronounce a given phrase over the radio.

Sea trials were also no walk in the park, as they are designed to train cosmonauts for splashdown. The spacesuit was the same for everyone: specially engineered, one-size-fits-all, and quite large for a person 5-feet 5-inches tall. The group of women was separated by height: Tereshkova, Kuznetsova, and Yerkina, at 5-feet 4-inches, were designated the “giants,” and Ponomareva and Solovyova the “shorties”, at 5-feet 3-inches. 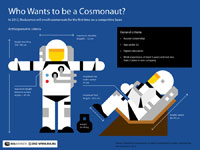 The female cosmonauts later told of how, at splashdown, the pressurized helmet would jerk forward and the headset would slip over their eyes. They had to simulate a parachute cutaway, but the fasteners would not stay in place. The inflated suit and gloves only made matters worse. The fasteners were hard to reach, let alone open. The slightest delay caused the body to start overheating.

Having successfully completed general training, the female unit was officially presented to Sergei Korolyov, head of the Soviet Union’s space program, who expressed dissatisfaction with the group in no uncertain terms.

On June 16, 1963, two members of the team — Tereshkova and Solovyova — were ready at the launch pad in full gear. Just moments before, while Irina was being outfitted, the pressurized suit tore in the neck region. Ponomareva’s suit had to be brought in urgently. If Tereshkova’s suit had ripped, no such replacement would have been available, due to the height difference. In that case, the first woman cosmonaut would have been Irina Solovyova.

During Tereshkova’s 3-day flight, the whole unit waited at the launch pad with baited breath. On June 19, 1963, the Vostok spacecraft and cosmonaut Valentina Tereshkova descended separately by parachute and landed safely near each other. Tereshkova’s outwardly triumphant flight did not, however, change Korolyov’s views regarding female cosmonauts. The female unit was finally disbanded due to “lack of utilization” in 1969, after Korolyov’s death.

Only Tereshkova remained at the Cosmonaut Training Center and was there in an official capacity until 1997. Prior to 2004, the only woman in the cosmonaut corps was Nadezhda Kuzhelnaya. Despite being considered a highly qualified specialist, Kuzhelnaya never flew to space during her ten years of service. Currently, the only female member is Elena Serova, but her cosmic destiny is still unclear. A member since 2006, she has yet to be assigned to any mission.

Meanwhile, studies on the impact of space flight on women's health are far from optimistic. Some salient points from a recent NASA report:

1. The level of radiation in low-Earth orbit, let alone in deep space, is such that it hinders the ability to become pregnant. For a normal pregnancy, levels of radiation should not exceed 500 micro-roentgen (µR) for the whole period of pregnancy (no more than 50 µR per month). This level varies on board the International Space Station (ISS), depending on the position of the station. Still, it would be around 35,000 µR over an entire period of pregnancy. Space can cause a deficit of ovulation and reduce estrogen levels, which leads to loss of calcium in the bones and osteoporosis (more so in women than in men).

2. In the absence of gravity, congealment of the blood in the pelvic organs may increase the risk of endometriosis (a hormonal disorder affecting female sexual organs).

3. Prior to lift-off, it is recommended that astronauts deposit their eggs and sperm for storage, if they intend to become parents at a later date.

Dr. Rostislav Beleda, having worked for 14 years as a sexual pathologist at the Central Research Aviation Hospital, believes that space flight has a negative impact on all functions of the female body, but especially on the reproductive organs. No American female astronaut has ever become pregnant after flying to space. Men also experience problems after long flights in space. Impartial U.S. data on the matter concludes that 63 percent of men and 80 percent of women astronauts suffer from sexual dysfunction.