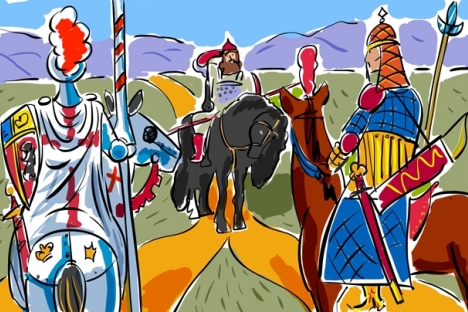 Historian and scholar Yakov Berger talks about misconceptions of Russia’s plans for development in the Far East, and discusses the benefits of Russia’s presence and relationships in Asia.

No one can deny the fact that, historically and geographically, Russia belongs to both Europe and Asia.  Many of the ethnic groups that make up the Russian state have always lived in Asia. European Russians, for their part, have been moving eastward for centuries, taming and transforming harsh local landscapes, whilst assimilating many Asian elements into their own cultural heritage.

So, in my view, it is wrong to speak of Russia as consciously “turning to Asia,” or, moreover, of Russia “returning to Asia.”  In fact, Russia has never moved away from Asia. Separated by continent and ocean, this is something the United States would be able to do, but not Russia.  When it comes to Asia, the U.S. can more-or-less come and go as it pleases, depending on current geopolitical interests.  But nothing and no one can separate Russia from Asia. Russia itself is in no position to willfully extract itself from Asia's influence, given the deep cultural and historical ties.

The most pressing task today is to develop the Asian part of Russia and put it firmly on the map. Eastern Russia needs to start following a policy of co-operation and integration with other parts of Asia and, indeed, the entire Asia-Pacific region. We can rest assured that progress is being made in this direction.

Over the past decade it has become very clear that, in terms of economic and industrial development, the 21st century will belong to Asia and the Asia-Pacific region. Like China and other Asian countries, Russia is firing on all cylinders to become a part of this West-to-East shift as it unfolds.  Russia stands ready to co-operate with its strategic partner China and other developing countries in the region.

Most people - both in Russia and abroad - see the obvious wisdom of this strategy.  As always, there is a small minority trying to undermine this approach, convinced that there is some kind of sinister machination behind the idea of Russo-Asian co-operation.

Conspiracy theories abound, and some people go so far as to accuse Russia of “returning to Asia” as part of a plot to help the U.S. curb China's seemingly unstoppable economic rise.  These accusations are too ridiculous to be taken seriously.  The only possible aim of these fabrications is to drive a wedge between Russia and China. If anything, it is this misguided attitude that will help facilitate American plans to isolate China and check its progress. Zbigniew Brzezinsky, an architect of American foreign policy, conceded that it is hardly surprising that China sees U.S. activities in Asia as an attempt to form an anti-Asian coalition.  Truth be told, if the authors of this policy were able to separate China and Russia, this would help their cause no end.

Russia and China take a unified stance against hegemonies, in Asia and in any other part of the world.   Hence, for example, Moscow and Beijing mutually reject the intrusive foreign policy that the West is trying persuade the global community to adopt in a number of Middle Eastern states.

At the end of the 1980s, Deng Xiaoping set the ball in motion for improving relations between China and the Soviet Union. He established a friendship between the two nations, proposing a line be drawn through previous misunderstandings and asking for Russo-Chinese relations to turn over a new leaf.  Deng's initiative has now been implemented, and relations between the two countries are at an all-time high.  Leaders of both countries speak of China's development as a benefit to Russia, and their statements are supported by hard facts. Thus, it is difficult to understand why certain people are intent on opening old wounds and reviving long-forgotten disputes about negotiations between Tsarist Russia and the Chinese Empire.

In Russia, people understand that a long-term strategic rivalry between the U.S. and China is inevitable, and that this battle will largely be fought out in the Asia-Pacific region.  The great majority of Russians are on China's side.  This is only because people in Russia are against what they see as the hegemonic aspirations of U.S. leaders; their insistent attempts to impose their own understandings of democracy, freedom and human rights on other countries, and their wish to make other countries behave in a way that suits the United States.

Russia's eastern regions are still less developed than Western Russia, and it will take a lot of money and manpower to shift the balance.  Still, Russia has every reason to remain optimistic.  Anyone familiar with Russia's history will know that, when push comes to shove, this country can deliver.  Furthermore, there are absolutely no grounds for pessimism today, when global and regional integration can be used to accelerate modernization in Siberia and Russia’s Far East.  Russia's eastern regions have enormous potential - and so this should be viewed as an opportunity - a potential trump card- and not a weakness.

Russia has no claims - territorial, political or otherwise - on any Asian state. More than anything else, it is in Russia’s interests for the Asia-Pacific region to remain stable, peaceful and ready to collaborate. At all costs, Russia wants Asian countries to avoid situations in which they could be drawn into bilateral or multilateral conflicts.  The fact that Russia is strengthening its presence in a region where territorial disagreements are not uncommon can only have a stabilizing effect.

Moreover, Russia's geographical position between Asia and Europe, along with its mixed historical roots, will help to establish Russia as a link between these two parts of the world.  This makes ambitious plans for developing infrastructure in Eastern Russia all the more important - once these plans are realized Russia will be able to fulfill a vital function in world politics.

No one is trying to remove Russia from Europe.  Russia’s culture and economy forever bind it to other European countries and nations. Russia is not turning to Asia and abandoning Europe, it is simply that, to use a Chinese expression, Russia wants to stand firmly on both two feet and seize both European and Asian opportunities to aid its further development.   This is the country’s legal right, and also the duty of future generations of Russian citizens

Yakov Berger is a historian and Senior Fellow at the Institute of Far-Eastern Studies at the Russian Academy of Sciences.